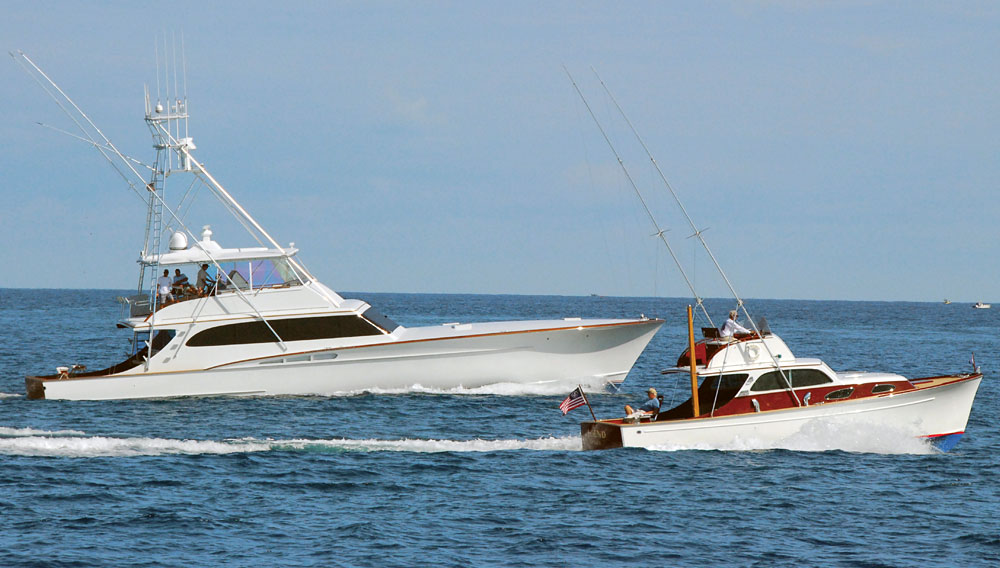 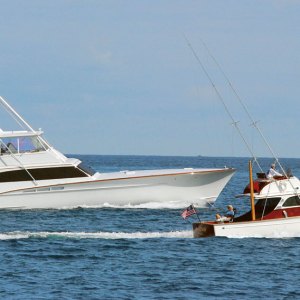 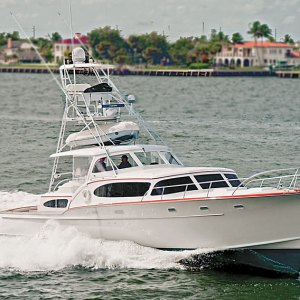 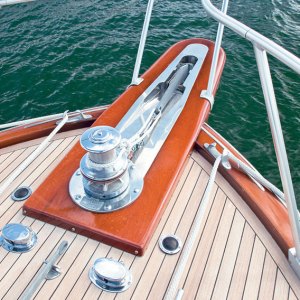 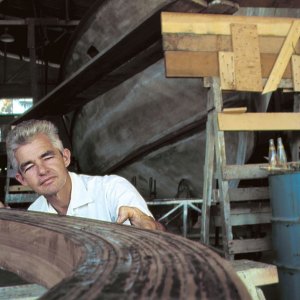 For years, Jim Connelly of Newport Beach, Calif., had wanted to own a vintage Rybovich sportfishing boat, but he learned this was no easy task in Southern California. Although the SoCal climate rivals that of Palm Beach, Fla. (where the Rybovich brand was born and continues to thrive), it is rare to see a vintage wooden fishing boat along the Pacific shoreline. According to Bunker Hill, a marine surveyor based in Newport Beach, fewer than 10 Rybovich craft are known to be anchored along the entire West Coast.

With the right connections and ample patience, Connelly eventually found an opportunity to own a classic Rybovich boat—hull #13, better known as Bimini Babe—which he bought with a partner in 1997. The 36-foot vessel had been commissioned by Bob Maytag, a philanthropist who was instrumental in the founding of the University of Miami’s center for oceanography, and Connelly was taken by the boat’s unique design and its high-quality workmanship. Maytag was a competitive sport fisherman during the 1950s and ’60s, and Bimini Babe was designed for that sole purpose.

After a few years of ownership, Connelly and his partner determined that the boat, although in good working order, deserved a thorough restoration. In 2004 they removed her from the water and began an 18-month process to transform her back to her original condition, circa 1954. Now, almost 60 years after Bimini Babe was built, Connelly continues to take her out fishing and exercises her just as Tommy Rybovich, the boat’s designer, intended. And although he says the boat turns heads wherever she goes, Connelly explains that it wasn’t until he navigated her along the New England coast in 2010 that he truly understood the power of the sportfisher’s charm.

Following a wooden boat festival in Mystic, Conn., Connelly took his wife and three kids on a tour of various New England seaports and coastal destinations, including Newport, Martha’s Vineyard, and Nantucket. At all stops during the trip, Bimini Babe was met with great fanfare, but at no place was that more apparent than Block Island, which was hosting the annual Tri-State Canyon Shootout tuna fishing tournament at the time. “There were all these big, brand-new, expensive, first-class fishing boats, and we just pulled in on a day cruise,” Connelly recalls. “The dockmaster saw us coming and gave us the prime spot at the end of the pier. Everyone wanted to come aboard and talk about the boat. It’s just a classic.”

Other vintage Rybovich owners share accounts similar to Connelly’s Block Island experience. “There’s a premium to owning a Rybovich,” says Bill Topercer, a resident of the Ocean Reef Club in Key Largo, Fla., who owns Mega-Bite, a 45-foot Rybovich built in 1962. “You get a little bit of an ego boost because people know what you have. It has an aura about it.”

Rybovich enthusiasts fawn over the classic designs that characterize those vintage boats, but those designs are more than just a reflection of the past. They’re a representation of one boatbuilding family’s ingenuity and its ability to create a style that defined an industry and encapsulated a lifestyle. “When these boats were new and showed up at sportfishing tournaments, they were head and heels above everything else that was there,” Hill says. “And with most of these old boats, you could show up at a sportfishing tournament tomorrow and still be relevant.”

For John Rybovich, fishing was a necessity, not a sport. A skilled woodworker, Rybovich had immigrated to West Palm Beach, Fla., from Austria-Hungary in 1910 with dreams of opening his own carpentry shop, but winter work was sparse, and by 1919 he had five children to care for. So Rybovich patched up a simple skiff and learned to fish as a way of putting food on his family’s table. His woodworking skills came in handy, and soon word spread of Rybovich’s proficiency in repairing boats. Commercial fishermen began bringing him their run-down boats for improvement, so Rybovich opened a boatyard.

For about a decade, Rybovich’s business relied on mundane work, such as scraping barnacles, repairing hulls, painting, storage, and occasional engine maintenance. That changed with the onset of Prohibition, as increasing numbers of rumrunners needed high-speed boats capable of bearing heavy loads. They found those features in a Rybovich craft, and for a period of time, the Rybovich family survived thanks to a steady stream of bootlegger commissions.

The 1930s ushered in a new era, however, and it proved to be the Rybovich family’s true calling. Ernest Hemingway, along with other notable figures like President Theodore Roosevelt, already had helped popularize big game hunting, and now the writer was in search of a new prize. The Bimini islands, about 50 miles offshore from Miami, had long been the subject of legend—Ponce de León believed they were the source of the Fountain of Youth, and others believed that the submerged stone-block formations off North Bimini were the remnants of the lost city of Atlantis. Hemingway, however, discovered a tangible treasure around those islands—giant billfish and tuna.

Hemingway brought his 36-foot Wheeler to the Rybo­vich boatyard for sportfishing modifications and, once the first Cat Cay Tuna Tournament was conceived in 1939, other enthusiasts soon followed. “The 1930s was a time of experimentation,” Johnny Rybovich, one of John’s three sons, told MotorBoating in 1976. “We didn’t know much about billfish and tuna in those days and I loved every minute of it. Everyone was working at trying to improve the boats, the tackle, the fishing techniques. We were really laying the groundwork for sportfishing as it is practiced today.”

World War II interrupted the family’s plans to build a customized sportfishing boat, but the three sons, who at this point had taken over the business from their father, got their chance in 1947, launching Miss Chevy II, a 34-foot craft and the first of four Rybovich boats commissioned by car dealer Charlie Johnson. The boat included the first fighting chair and the first set of aluminum outriggers, and these advancements eventually led the Rybovich brothers to introduce models equipped with transom doors and tuna towers. All of those sportfishing features came together as standard offerings in the eighth hull that the Rybovich brothers built, in 1952. That 34-foot boat, Miss Chevy IV, also introduced the company’s broken sheer design, which provided a more sleek profile than the previous seven, trunk-cabin craft. “For me, it’s all about the significance that Rybovich brought to the industry with its ideals and the things that it brought to the boats,” says Neil Turney, a 57-year-old from Tacoma, Wash., who owns Dambuie, the company’s 23rd hull, built in 1956. “From the fighting chair and the transom door, to many things that are now regular features on sportfishing boats, Dambuie represents the dawn of that era. It’s nostalgic and [a piece of] history, and that’s why I own it.”

Johnny Rybovich was the sport fisherman in the family and the mind behind the aluminum outriggers, fighting chair, and transom door. Emil, the youngest Rybovich brother, used the mechanical engineering training that he received in the Army Air Corps to match innovative hull designs with proper power sources. And it was Tommy, the middle child, who designed each Rybovich craft from scratch. According to his daughter, Pat, Tommy found inspiration from his years flying B-17 missions during the war. “My dad was intuitive the way he designed; he had this gift somehow,” she says, explaining that he never took his boats out on the water. “He loved to fly and I think the boats were inspired by his love of flight. What looks like a straight line is not a straight line.”

Pat recently published a 608-page coffee table book chronicling the family business (www.rybovichbook.com), and during her research for that undertaking she learned all the idiosyncrasies of her late father—in particular, his perfectionism. “If every square millimeter wasn’t absolutely perfect, he’d do it over again,” says Evan Ladoux, the book’s producer. “There wasn’t a lazy splinter in the guy’s psyche.”

These days, Emil’s son Michael carries on the Rybovich boatbuilding tradition with his new company, Michael Rybovich & Sons (www.michaelrybovichandsons.com). He launches about two boats a year, though each one takes about two years to complete, and he says that while the average size of a Rybovich craft during the 1950s was 40 feet or less, now a Rybovich sportfisher ranges from 65 feet to 85 feet.

He takes on restoration projects, too, likening them to “taking care of a member of the family.” Still, he says that restoring vintage boats is not unlike restoring vintage automobiles or aircraft—the owner seeking a restoration will always spend significantly more than what the boat is worth. Topercer can attest to that. He says that Mega-Bite is a $250,000 boat as she currently floats in the waters of the Ocean Reef Club’s marina, but to replace her in her restored state would cost $2.2 million. “It has to be a labor of love,” Rybovich says. “It has to be a special customer who is not concerned with what the value of the boat is going to be when it’s done. It has to be a customer whose main concern is restoring a classic or a legend. There are a select few people out there who want to do it for that reason and to share in the pride associated with that. It’s all about that pride of ownership.”

Turney grew up working on a boat dock in North Palm Beach, Fla., and understood all that was involved in the process of restoring Dambuie. He also recognized that by choosing to restore a classic as opposed to buying a modern-day sportfisher, he was sacrificing both 21st-century performance and hassle-free maintenance. However, those were sacrifices that he was willing to make. “It really comes down to the folks who appreciate them for what they are,” he says of vintage Rybovich boats. “It’s much like guys my age who have a passion for classic cars—they know what it takes to keep them running. They’re not maintenance free by any means, but you have to enjoy that process along with the stewardship of the asset.”

Jon Schneller, a 67-year-old from Montauk, N.Y., has owned Circe, a 36-foot Rybovich, for about a dozen years, and he says that his own boatbuilding experience (and the appreciation for quality craftsmanship that it instilled) is what enticed him to buy the 1957 craft. Knowing that his boat was edge-glued and glassed from bow to stern, he felt comfortable projecting its longevity. “They have histories and a reputation. It’s like buying a Bugatti,” Schneller says. “You don’t have to know about the mechanics of it; you know that you’re buying something extraordinary.”

For Schneller, owning Circe also offered the chance to own a piece of history, to regularly feel transported to an earlier time. “I kept it as original as possible,” he says of his boat, “and when you do that, you really do turn the clock back a bit. When you run the boat, you feel like you’re fishing with Hemingway.”