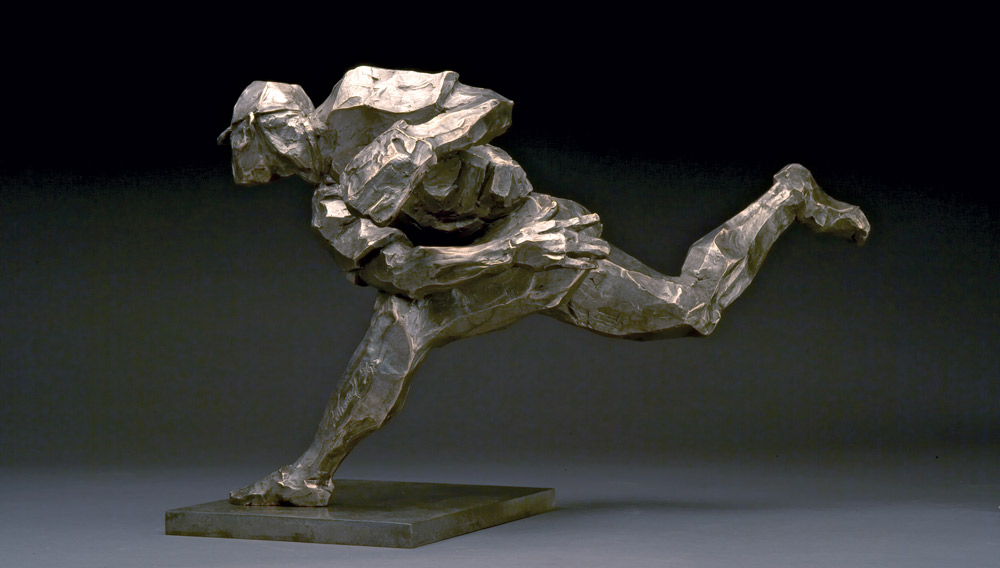 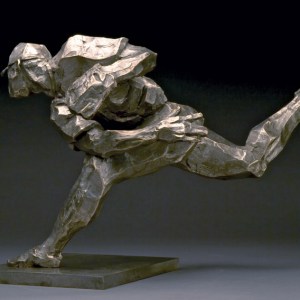 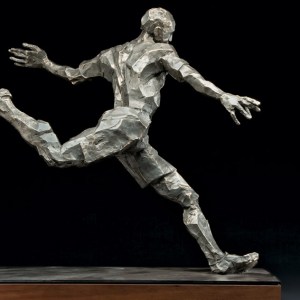 Gail Folwell recalls the time in 2001 when a Canadian hockey player viewed her first sports-themed art piece, a 1999 bronze that she cheekily dubbed Pas de Deux. He could not contain himself, she says. “He was almost dancing around the thing.” The sculpture depicts two hockey players slamming into each other on the ice, limbs and sticks splaying every which way. “ ‘That’s it, that’s it!’ he told me,” Folwell says. “ ‘How do you make it look like what it feels like?’

“That’s the reaction I love,” she continues. “It’s not about who it is, or what it looks like. It’s about what it feels like. That’s what resonates.”

Folwell had a successful career as a graphic artist before taking a sculpture class in 1995 and experiencing an epiphany. “I had ideas that made me want to sculpt all the time,” she says. “My mind exploded with all sorts of things that I wanted to manifest.”

She typically has at least five pieces in various stages of progress in her Boulder, Colo., studio. Some are private commissions, some are public; others that she makes for herself will become limited editions. Only about half of her works are sports related, and she says they are unusual in that they depict the action of the games instead of specific players. “Most sports sculptures are portraits. They’re not about the sport. They’re about somebody,” she says. “That’s lovely, but I do stuff about the sport. That really seems to click with a lot of men. They see me and say, ‘A girl did that?’ ”

In early August, prior to the NFL’s annual Hall of Fame preseason game in Canton, Ohio, Folwell’s monumental bronze The NFL Draft, 1936 was unveiled at the Pro Football Hall of Fame. She chose the ­subject—the NFL’s first-ever draft—from a list of the 11 greatest moments in foot­ball history compiled by the Hall of Fame. The sculpture shows a five-member, 7-​foot-tall offensive line hunched in position around a man wearing a suit and fedora. That figure represents Bert Bell: the creator of the draft, the founder and original owner of the Philadelphia Eagles, and, later, the commissioner of the NFL. The first draft came at a time when the NFL was a struggling, second-tier league. The draft brought stability to the league by giving the weaker teams a first chance at signing the better players. “Everybody was trying to make it work for the common interest,” Folwell says. “It’s different now, but that resonated with me: the suits and the sports on the same team. That’s why the piece is the way it is.”

She has produced several limited-edition maquettes based on the bronze, such as a 14-​by-10-by-14-inch version of a single player, and she plans to create other pieces, which might include a full-size example of any combination of the players. The limited editions are available through Claggett/Rey Gallery in Vail, Colo., and Aerena Galleries and Gardens, which has three locations in Northern California’s Napa Valley.

At the same time that Folwell was finishing the football statue, she embarked on a new project, a private commission to depict a friend’s dog. Folwell says shifting her focus from guards and tackles to a canine has not been as difficult as it might seem. “It’s a matter of muscle, whether it’s human or not,” she says. Folwell is basing the sculpture on a photo of the dog pouncing. “It’s really not about a literal portrait of him,” she says. “It’s about his energy.”