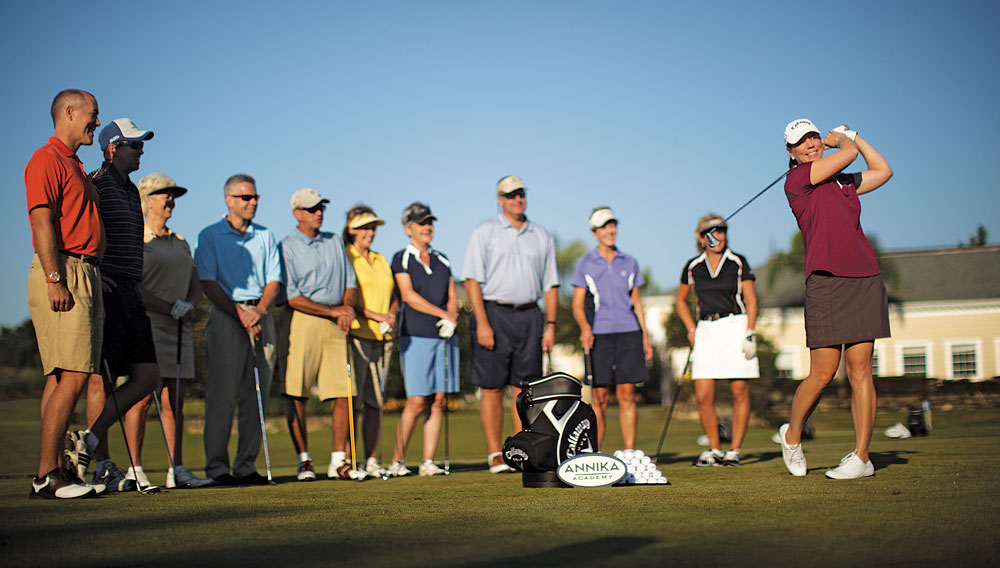 “Everyone wants to know what it’s like to win a major tournament,” says Annika Sörenstam, who makes the answer no secret, especially to those who participate in the three-day “Soren-Slam” instructional seminar at the Annika Academy in Orlando, Fla. The three-time U.S. Women’s Open champion will gladly answer that question, as well as most others that come up; however, Sörenstam is intent to ask some questions of her own. After all, it’s her goal—and the goal of her academy’s staff—to improve the games of all the golfers who participate in the $9,245 seminar.

The three-day training camp is led by Henri Reis, Sörenstam’s personal swing coach, and covers all aspects of the game—from full-swing instruction to putting, chipping, and bunker play. Participants will see their swings dissected through video analysis and will be fitted for clubs through one of only 15 certified Callaway Performance Centers in the country. The package also includes fitness instruction with Kai Fusser, Sörenstam’s personal trainer, a course management seminar, a Sörenstam-led instructional clinic, and 36 holes of golf, nine of which are played with the 10-time major winner. For many participants, like Steve Birger, it was the nine-hole round with Sörenstam that sealed the deal. “Originally, my main goal was just to meet Annika and play nine holes with her,” he says. “But what I got out of it was much more than that.”

Birger has played the game for almost 30 years and regularly seeks professional instruction.  However, the 47-year-old from Atlanta says that the guidance that he received from Reis during a Soren-Slam seminar in April led to an immediate enhancement of his ability. “I’m hitting a lot straighter and I’m much more accurate,” he says. “I’ve hit some of the best wedge shots in my life now.”

Birger enjoyed success almost immediately during the seminar and proudly recalls a moment during his round with Sörenstam where, on a par-3, he hit his tee shot to within three feet, knocked in his putt for a birdie, and outscored the pro on the hole. Sörenstam, for her part, says that over the course of the 25 seminars that she’s hosted since the academy launched five years ago, there are always a handful of golfers who try to outplay her. “In the beginning, some of them try to outdrive me. Some succeed, and that’s a story they have for the rest of their lives,” she says. “Some people don’t outdrive me, but I always remind them that I do this for a living.”

Perhaps the biggest lesson that Birger learned during the seminar was how to deal with poor lies and low-percentage scenarios while out on the course, and he learned that lesson while watching Sörenstam lay up out of a fairway bunker. It was a reminder that even the best golfers must sometimes play conservatively. “You read it and you hear tips, but when you have someone of that stature do it [and you can watch], it’s more impactful,” he says. “It helps it sink in.”