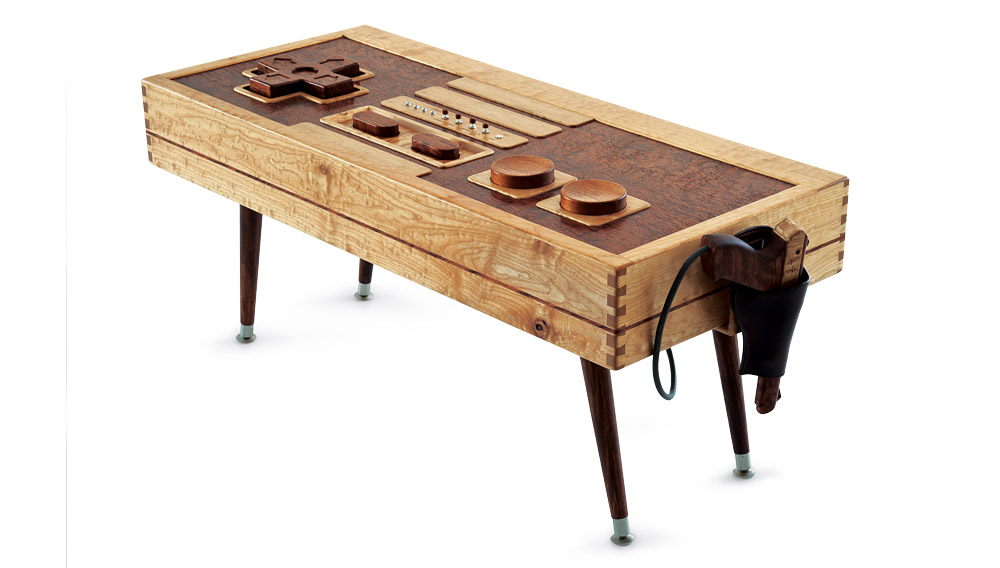 A handcrafted piece of furniture that brings form and function to new levels.

When the Nintendo corporation released its revolutionary, 8-bit video game console in the United States back in 1985, Ronald Reagan had just begun his second term, Tears for Fears’ hit single “Shout” dominated the radio airwaves, and a pair of future Hall of Fame quarterbacks, Joe Montana and Dan Marino, squared off during Super Bowl XIX in what amounted to a lopsided affair in Stanford, Calif. Charles Lushear was only 2 years old at the time, but his childhood later would be punctuated by countless hours spent playing Nintendo—more specifically, the company’s 16-bit console, Super Nintendo, which hit the American market in 1991.

Fast-forward to the present, where Lushear—now the sole proprietor of Bohemian Workbench in Southern California—spends more time building furniture in his woodworking shop than he does seated in front of a television with a video game controller in his hands. Within the last year, however, the 30-year-old furniture maker has found a way to marry those two passions by designing a functional Nintendo Wii coffee table, which resembles a classic Nintendo controller from the mid-1980s.

Lushear makes a few variations of the table, including a nonfunctioning model and one that’s designed to function only with the original Nintendo Entertainment System. His pride and joy, however, is the $7,200 Wii-compatible table that’s crafted from curly maple, bird’s-eye maple, African bubinga, and mahogany hardwoods. The table features dovetail joinery and a side-mounted bison holster, which cradles a handcrafted zapper made from bubinga and maple. The zapper, which includes a vibrating mechanism and a speaker, serves as a replacement for the traditional Wii controller and also pays homage to the old-school zapper that die-hard gamers will remember from Nintendo’s early Duck Hunt days. The nostalgic piece of furniture also can serve as a traditional table, thanks to a removable glass top.

Whether it’s being used as an oversize Nintendo controller or as a traditional coffee table, Lushear’s creation is a guaranteed conversation starter; however, the creator is most proud of the table’s functionality. “I was so excited about the materials that I got that I made the decision to make it functional,” says Lushear, explaining that it was a last-minute creative impulse to equip the table with the necessary electronics to turn it into a gaming device.

Yes, that’s right—should gamers want to rekindle their lost youth, they can use the table to play almost 200 original Nintendo games that are available for download on the Wii. Given the size of the table—er . . . controller—the gaming experience will not be exactly as they remember it, though. Lushear says that playing any game on the table is typically a two-person job. Nevertheless, it’s an object that is sure to capture the attention and curiosity of all who see it, and that, Lushear says, is what he strives to do with every new piece that he makes: “I really want to make a statement with my work and give people something to talk about.”