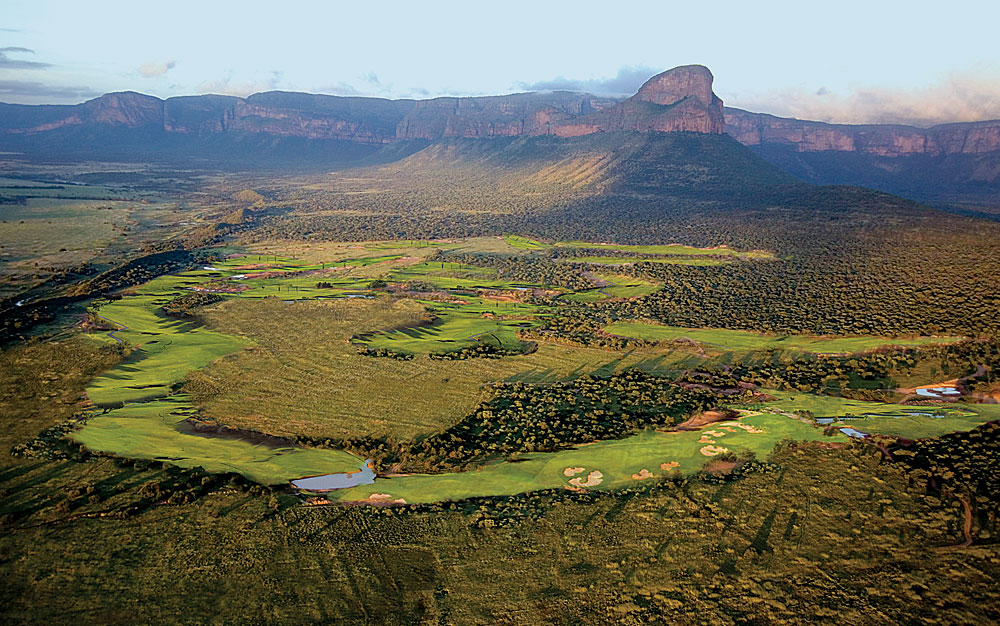 To play the Extreme 19th, a bonus hole at South Africa’s new Legend Golf & Safari Resort, you take a helicopter to the peak of a red-hued sandstone mountain. The tee box at the top affords a view of the 54,000-acre Entabeni Safari Conservancy—and the 1,200-foot vertical drop to the green.

This spectacular par 3 is part of an ambitious resort development located three hours north of Johannesburg by car. In addition to the Extreme 19th, the 2,160-acre Legend complex includes homesites, a 10-hole par-3 golf course, and, debuting in March, a practice facility and the Legend Signature Golf Course. Visitors to the resort can stay at the 10-suite Hanglip Mountain Lodge or at one of the five other safari lodges that are scattered throughout the conservancy.

The Signature course is notable for more than just its bonus hole. The layout is a first-of-its-kind collaboration among 18 PGA Tour professionals, including Padraig Harrington, Vijay Singh, Colin Montgomery, and Jim Furyk. Working with IMG International, golf director David Riddle, and DDV Design Group—which created the basic footprint—each golfer shaped one of the course’s holes into his own design. Altogether, the layouts form a course of elephantine dimensions, running some 8,500 yards through the bush on the foot of Hanglip Mountain. “I wanted the element of neatness before the chaos of the African bush,” says Riddle. “But everything had to be on the scale of the property and the surroundings.”

Fences shield the Signature course from lions and other native predators that roam the surrounding Entabeni Game Reserve, but giraffes, zebras, wildebeests, and other benign creatures traverse the grounds freely. The reserve itself forms the bulk of the greater Entabeni Safari Conservancy and spans mountains, bush, lakes, and streams.

Game drives are the main attraction at Entabeni, but golf is a close second. Legend’s par-3 layout, called the Tribute Golf Course, offers a world tour of classic holes, including Royal Troon’s 11th, Augusta’s 16th, and Yale University’s 10th. Riddle designed the Tribute with the aid of Google Earth and photographs, which he used in copying the layouts of the original holes.

Still, the Extreme 19th is Legend’s most memorable hole. At 770 yards, the world’s tallest par 3 is also the longest. Depending on wind conditions, the hole requires the equivalent of a 280-to-300-yard shot. A short fairway rolls down to the green, which is shaped like the African continent and framed by sand. Staff at the tee box communicate with a caddy ranger positioned near the green to locate shots.

Playing the Extreme 19th costs about $295, a supplement to the $65 fee for a round on the Legend Signature course. The price includes the chopper ride and a DVD recording of your experience. Actuaries say the odds of a hole-in-one are 1 in 100,000, but the figure to note is $1 million—the prize the Legend resort will award to anyone who achieves the unlikely feat.