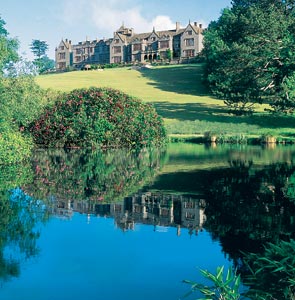 In January 2003, when entrepreneur Peter de Savary acquired the Manor House hotel in Devon, England, the property’s best years were well in the past. Viscount Hambledon, son of British bookseller W.H. Smith, had built the formidable mansion in 1906 on the edge of what is now Dartmoor National Park. The house became a hotel in the early 1920s, and the Great Western Railway, developers of such famed courses as Turnberry and Gleneagles, added a golfing element in 1926. By the late 20th century, however, the property was showing its age. De Savary, the man behind the St. James’ Clubs and Scotland’s Skibo Castle, initiated a $50 million renovation of the resort and rechristened it with a more illustrious moniker, Bovey Castle.

De Savary revamped the hotel’s 65 guest rooms and suites, but he lavished most of his attention on the public spaces. The desecrated Cathedral Room, which had suffered the indignity of being subdivided into two floors, now shines in its original single-story glory, capped by a vaulted and beamed ceiling of native oak. French craftsmen stripped the paneling and restored the lost patina, and the room, with its huge marble fireplace, minstrel gallery, and wall of mullioned windows, is now the site of high tea every afternoon.

Outside, the verdant Devon countryside tumbles down to the valley formed by the confluence of the River Bovey and the River Bowden. Here lies the Old Course at Bovey Castle, originally designed and built by J.F. Abercromby. The course was a touch out of date for the modern game, so de Savary enlisted his favorite architects, Scotsmen Donald Steel and Tom Mackenzie, to reshape some greens, add new bunkers appropriate for today’s distance game, and install a much-needed irrigation system.

The Bovey Castle card shows a par 70 at 6,252 yards, but the Old Course is no pushover. Each hole on the front nine seems to be bordered by the snaking River Bovey, and any shot that is not precisely aimed, or which falls victim to the customarily breezy conditions, is almost certain to find a watery grave. Even the back nine, which challenges with hills rather than water, demands accuracy.

Golfers who wish to use Bovey Castle as a base of operations will find a multitude of excellent English courses within reach, from the Nicklaus-designed St. Mellion parkland course to the seaside links at Westward Ho! and Saunton. Guests at Bovey Castle can also enjoy fly-fishing (both on the resort’s own trout-stocked lakes and on the nearby rivers), tennis, horseback riding, archery, skeet shooting, hunting, or just hiking a riverside trail to the village of North Bovey for a pint at the local Ring of Bells pub.

De Savary’s plans for the near future include the addition of a private golf clubhouse and membership program. But whether one joins the club, or merely books a week at the hotel, Bovey Castle promises to be a memorable place to stay and play.