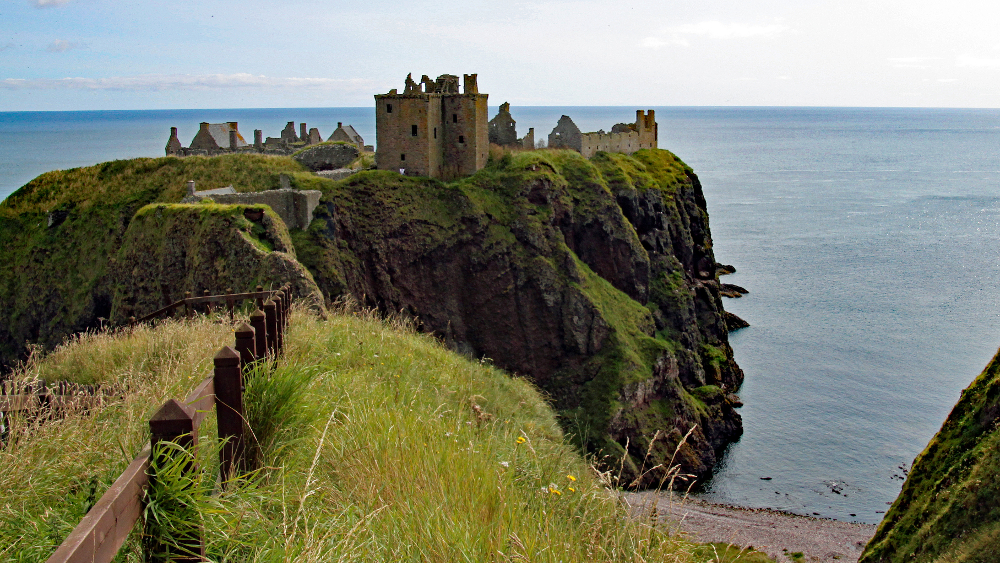 American golfers traveling to Scotland usually zero in on courses that have hosted the (British) Open such as the Old Course at St. Andrews, Muirfield, Turnberry, and Troon. Earning those bragging rights inevitably leads to another trip across the pond. Increasingly, the “must play” destination is Aberdeenshire, a region northeast of Glasgow and Edinburgh with more than 70 golf courses, including two of the world’s oldest. It’s also home to about 300 castles ranging from ruins to royal bastions, many of which have accommodations for visiting golfers. This is quintessential Scotland, where you’ll find more Scots than Americans and enjoy authentic Scottish hospitality. Here’s a look at five world-class, links-style golf courses on the North Sea not far from the lively city of Aberdeen and its international airport. All are located along a 45-mile stretch of spectacular coastline, and each is paired with a notable castle to consider for an après golf visit or overnight stay.

The Cruden Bay Golf Club’s laid-back atmosphere gives little hint of its ranking in the world’s top 100 and history dating back more than a century. It’s easy to forget that legends such as Old Tom Morris were involved in the routing because it is so breathtakingly natural. Winding among towering dunes, the track rises to views of the brooding North Sea and the ruins of Slains Castle, then ducks into narrow fairways and greens hidden in grassy bowls. 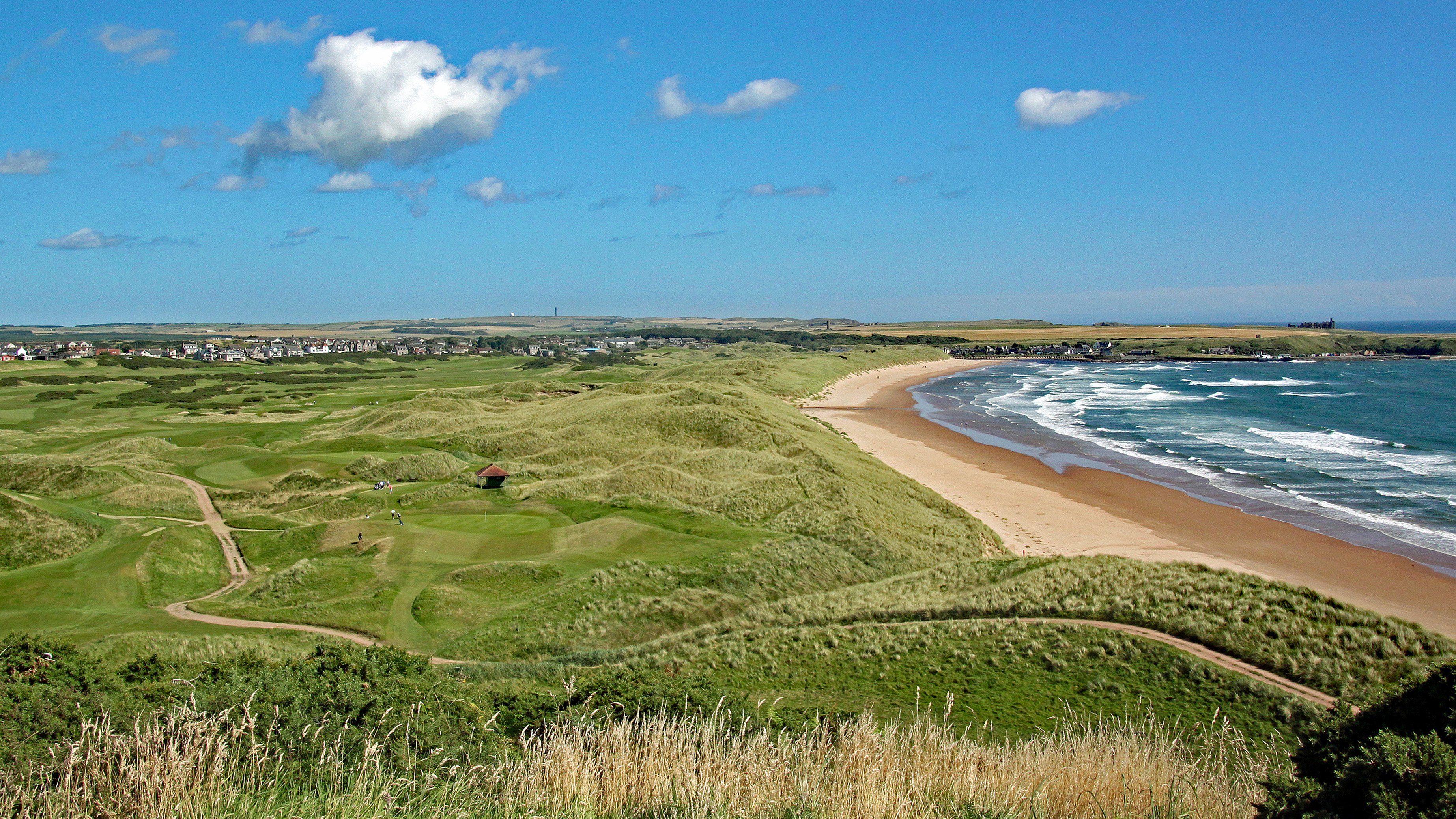 You’ll want an immediate replay, but the castle ruins beckon. Set on a bluff pounded by the sea, the forlorn castle walls are open to the elements (and visitors). It was here that Bram Stoker was inspired to write Dracula. The writer was also a frequent guest at the nearby Kilmarnock Arms Hotel, which is now a comfortable three-star (Scottish Tourist Board ranking) lodging with 19 rooms and a highly touted restaurant serving locally sourced fare

Sandwiched between more famous neighbors, Newburgh-on-Ythan Golf Club is often overlooked by visitors but is a fascinating layout with a dual personality. The back nine dates to 1888 and is a delightful stretch of classic links holes along the Ythan Estuary. Lined with ancient gorse bushes, its firm sand-based fairways are pocked with natural dips and hollows and often lead to punchbowl greens. The par 3 sixteenth hole is a gnarly blind shot. Occupying higher ground is the newer front nine, where rolling fairways and heavily tiered greens present quite a different challenge. 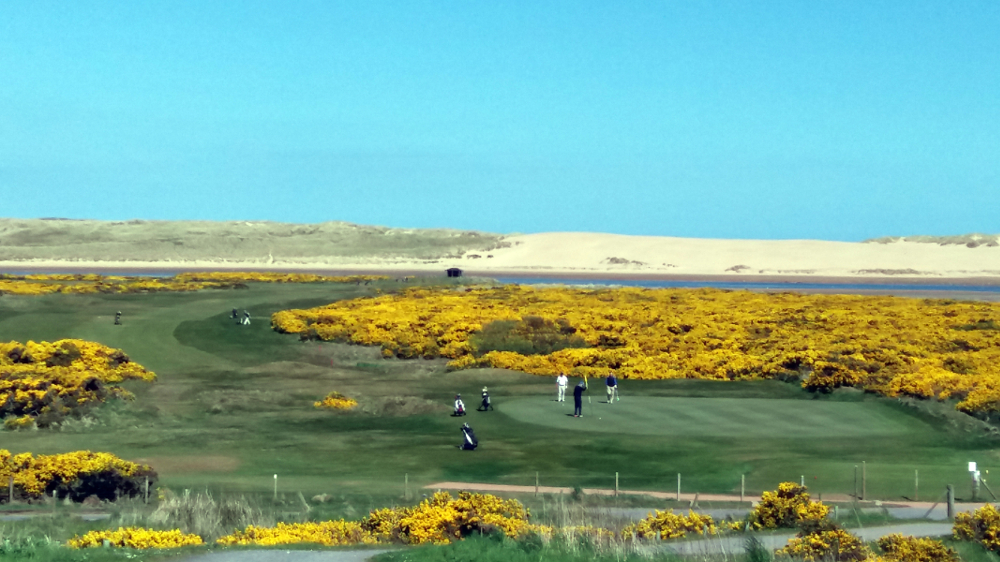 Twenty minutes from the course is Tolquhon Castle, a showplace built in 1589 by a progressive laird who entertained the likes of King James VI. Occupied until the mid-19th century, the well-preserved ruins surround a courtyard fronted by a decorative gatehouse.

Nearby is the four-star Meldrum House Country Hotel, an historic mansion with 51 guest rooms and an award-winning dining room.

Established in 1777, Fraserburgh Golf Club is the seventh oldest golf club in the world. Redesigned by James Braid in 1922, it’s known for extremely hilly fairways and a variety of hole configurations—especially on its par 3s. Elevated tees offer a peek over massive sandhills to the golden beaches and ancient town of Fraserburgh. 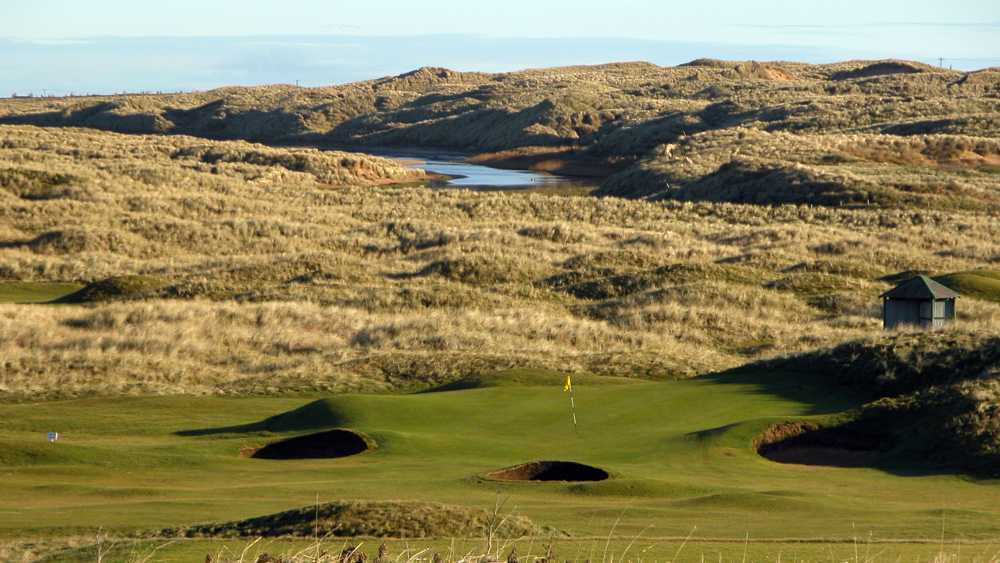 As in the case of Newburgh-on-Ythan, the Meldrum House Country Hotel is the closest four-star lodging, with rooms in the baronial manor house, the converted stables and a modern new wing. After drinks in the 800-year-old Cave Bar, guests dine on seasonal, local produce in the elegant dining room. For a change of scene from links golf, the hotel’s private, parkland golf course winds through the estate’s mature woods.

Meldrum House is a perfect base for a visit to Craigievar Castle, whose pink towers inspired Disney’s trademark. A family home for 350 years, it is fully furnished and open for tours.

Opened in 1909 on a spectacular stretch of linksland near the Royal Aberdeen Golf Club, Murcar’s Archie Simpson layout was fine-tuned by James Braid in the 1930s and more recently by Graeme Webster. The course offers views of the North Sea from almost every hole, which also exposes it to capricious winds. The dunes are massive and a pesky burn (stream) conspires with heather and gorse to devour balls. Ranked in Scotland’s top 50, the course plays much harder than its 6,516-yard length implies. 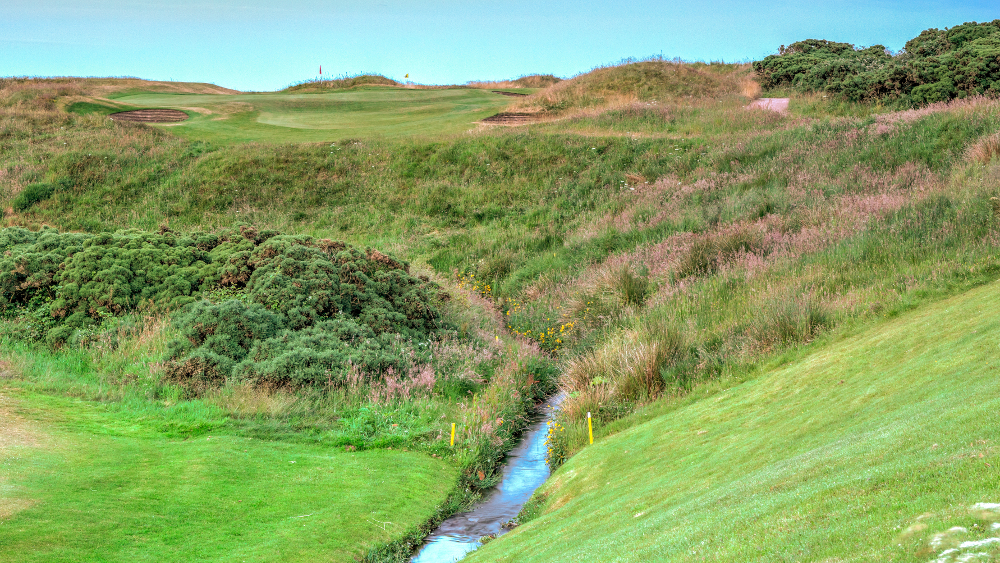 Forty minutes from Murcar is 800-year-old Fyvie Castle, one of the most impressive bastions in Aberdeenshire—and an enchanting place to stay. Robert the Bruce, Edward I and Charles I were guests here. Five families added towers to the fortress, which is surrounded by parkland with a loch nearby and a lovely walled garden. Inside are spiral staircases, original suits of armor, stern portraits, eight guestrooms—and, some say, ghosts.

The world’s sixth oldest golf club, Royal Aberdeen hosts national and international tournaments on its rugged, 6,900-yard Balgownie Links, the club’s home course since 1888. Greens on the front nine are small targets buffeted by winds off the North Sea. The par 3 eighth, guarded by ten bunkers, can vary from a wedge to a wood. Blind shots and diverse greens define the back nine, which ends in a long par 4 stoutly defended by bunkers and gorse. 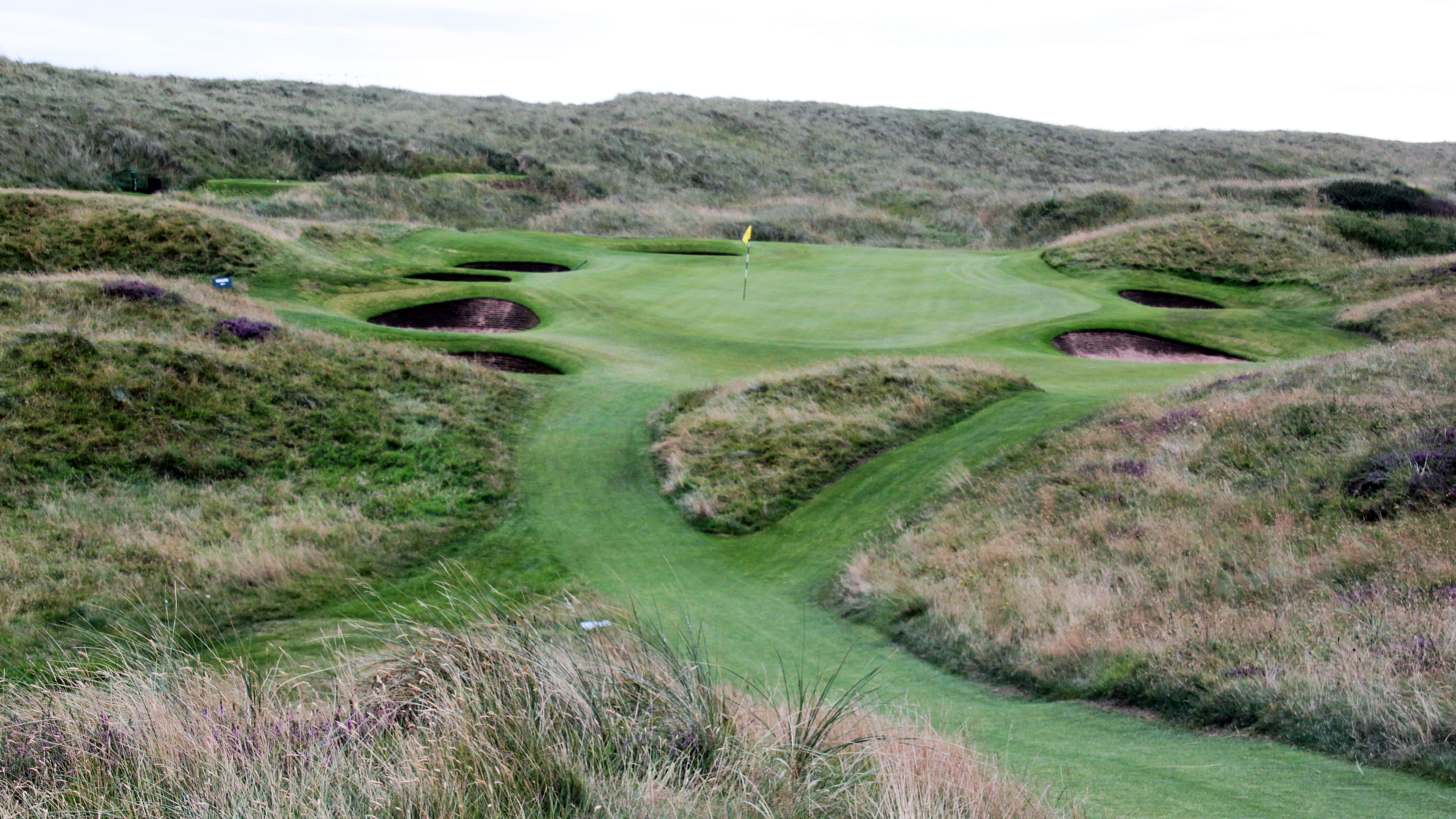 Twenty minutes away in Aberdeen is the 40-room, five-star Marcliffe Hotel & Spa, an 1848 mansion converted into a luxury hotel. Owner Stewart Spence is an avid golfer who is also passionate about his restaurant’s authentic Scottish dishes.

The dramatic ruins of Dunnottar Castle are about an hour to the south, atop a 160-foot high headland. Hamlet (1991) and Frankenstein (2015) were filmed here, and the site inspired the movie Brave (2012).