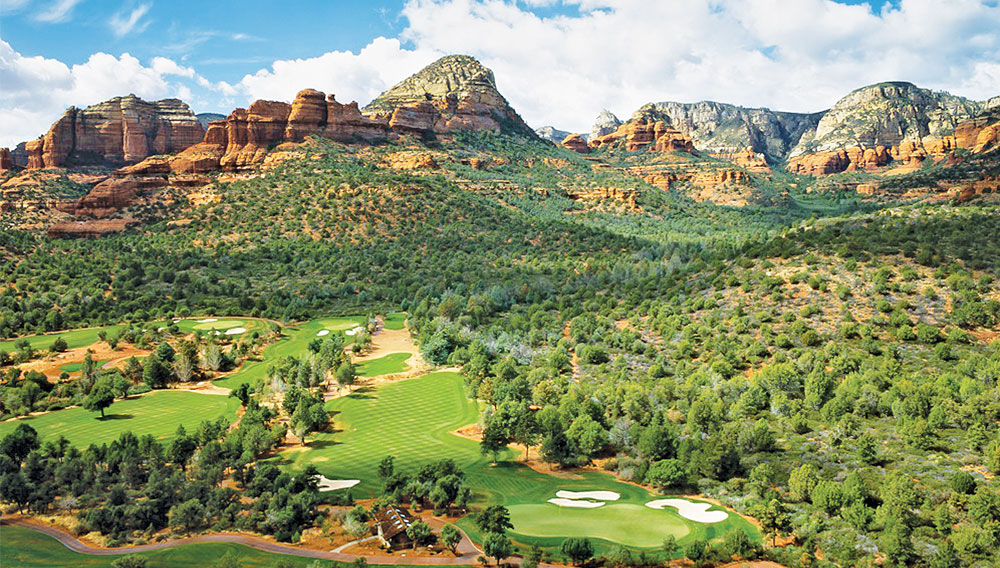 Arizona’s Enchantment Resort is a feast for the senses. Nestled in Boynton Canyon in Sedona—and surrounded by the Coconino National Forest and the area’s mystically beautiful red-rock formations—Enchantment lures everyone from adventurers to spiritualists with its outdoor activities (notably hiking and mountain biking), gourmet Southwestern dining, world-class spa, and proximity to what many believe are energy-filled vortices in the rugged landscape. In June, the 27-year-old property augmented its amenities menu with a delectable new course: the Tom Weiskopf–designed Seven Canyons golf club.

Just five minutes down the road from Enchantment, Seven Canyons originally opened 10 years ago as part of a private residential community. The club filed for bankruptcy in 2010 but has now reemerged after its acquisition by Enchantment, which has opened the challenging Weiskopf layout to guests of the 218-room main resort and its on-site destination spa, the 16-room Mii Amo.

Weiskopf, who is one of his generation’s most creative architects, has a special affection for his adopted home of Arizona. With Seven Canyons, which he designed as a private club, he fully embraced the difficulties of high-desert golf. Spread over 200 acres, the course twists tightly through junipers and pines and uses subtle elevation changes and large bunkers to play considerably longer than its recorded yardages. (One exception to the subtlety of the terrain is the par-3 fourth hole, which drops 80 feet to a small, sand-fringed green.) Because the course sits at an elevation of 4,600 feet, the turf—bluegrass and rye fairways, bent greens—is lush and easy to hit from. The majestic saguaros found at lower elevations are absent, but missing the fairway involves tangling with low brush, dry washes, and other trouble that is just as prickly.

Indeed, Seven Canyons is a thinking person’s course, not suitable for corporate hit-and-giggle outings. It helps to hit a controlled right-to-left draw and to control an arsenal of high and low shots inside 100 yards (as well as a high-lofted sand wedge). The greens are banked and often tiered, roll true if not exceptionally fast, and use mounding and bunkers to both protect and deceive.

Like Enchantment, however, Seven Canyons stands out for the beauty of the surroundings. With its red rocks, tall trees, and desert flowers—all under a deep-blue Arizona sky—the course is the cherry on top of a delightful destination.