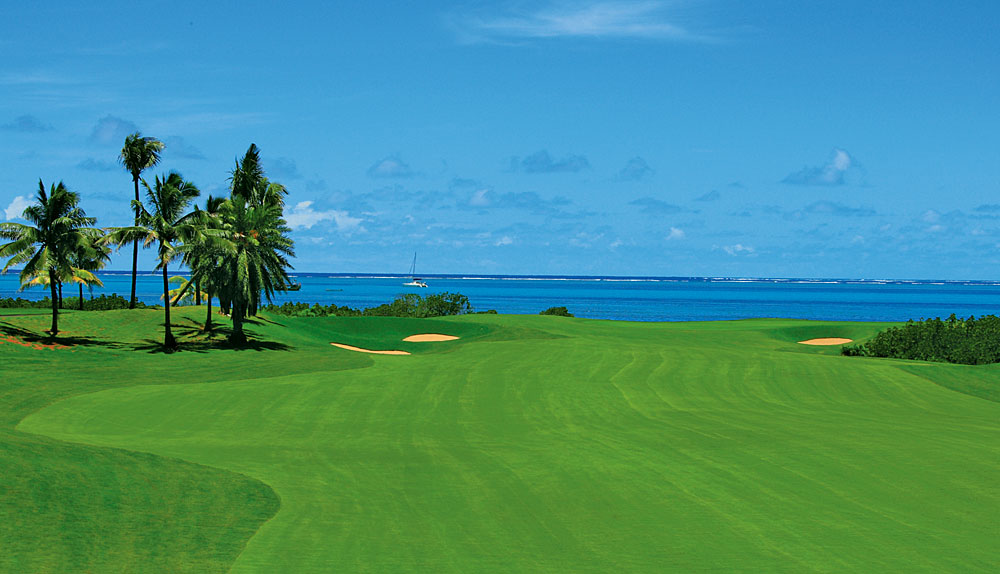 In person, on the course that he designed at the new Four Seasons Golf Club Mauritius at Anahita, Ernie Els does not look as imposing as he does on TV. But his swing—the one that, together with his 6-foot-3, 230-pound frame, earned him the nickname the Big Easy—is as smooth and seemingly effortless as ever. The two-time U.S. Open champion, who was on hand for the golf club’s grand opening in November, played the 7,580-yard course (the country’s longest) from the tips. Each hole, however, has four alternative tees that, for lesser golfers, can make this new resort layout not so big, and a little easier.

Els’ design at the Four Seasons is certainly easy on the eyes, showcasing the natural beauty of Mauritius, an island nation located off the coast of Madagascar in the southwest Indian Ocean. The course runs through fields of sugarcane, around mangrove-lined lagoons, over ravines, and along the coast, offering views of pristine beaches and calm, reef-protected waters. The jagged peak of Trou aux Cerfs, a now-inactive volcano that helped form Mauritius some 10 million years ago, serves as the inland backdrop, while banana and coconut trees line many of the fairways. “This site was crazy, like a jungle on the ocean,” says Els in between shots, gesturing at the scenery. “Three years later it’s a golf course. It’s incredible.”

Els, who lives in Florida, has been designing courses since 2000 in locations as diverse as Hawaii, China, Dubai, and his native South Africa. Like this layout, many of his prior efforts indicate his affinity for Scottish links courses, which fit the golf to the land instead of tailoring the land to the golf.

The resort itself, the Four Seasons Resort Mauritius at Anahita, is configured as a compound, with 123 freestanding thatch-roofed villas and residences. Each accommodation has a plunge pool, an open-air bathroom with a soaking tub and a glass-walled shower, a fully equipped kitchen, and an array of indoor and outdoor living and dining spaces. All of the villas are located just steps from a private beach.

Mauritius—which the Dutch first settled in the late 1600s, and the British and French both occupied in subsequent centuries—has long been popular with European vacationers. The island is also a favorite destination for South Africans, who can reach it via a short plane ride. “When Americans discover it, they are going to love it,” says Els. “It’s safe, friendly, there’s a lot of great golf being built. It’s a gem waiting to be discovered.”