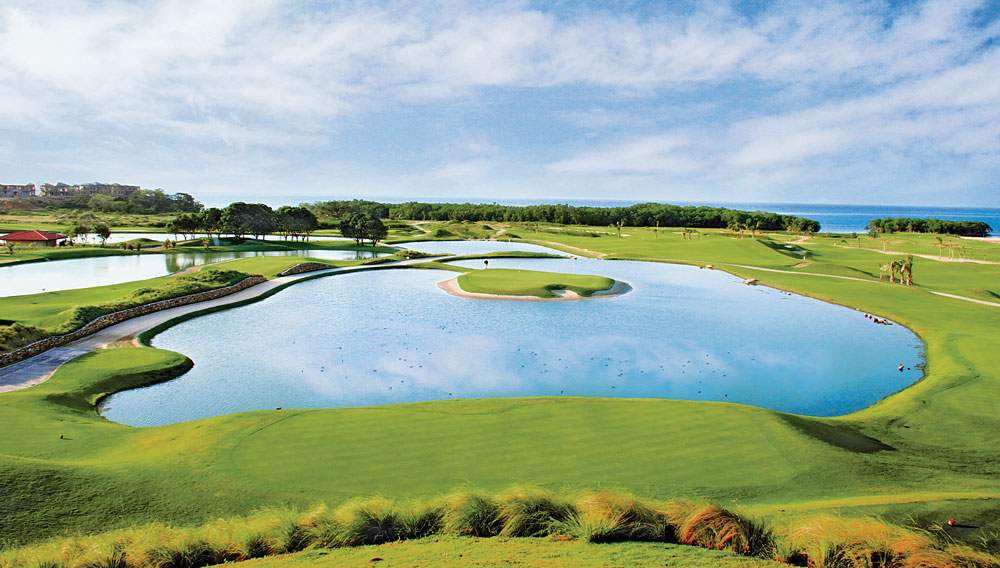 At 86, golf architect Pete Dye is still in full swing. The energetic octogenarian has a half dozen new projects in Latin America alone, most in conjunction with his son Perry. The duo’s latest collaboration, the Black Pearl, opened last year as the cornerstone of Pristine Bay, a sparkling resort community on Honduras’s Roatán Island.

Pristine Bay is the first high-end development on Roatán, a carefree Caribbean island where divers have been coming since the 1960s to explore the world’s second-longest coral reef. “It’s not so serious an island,” says Luis Toriello, a Guatemalan whose family is developing Pristine Bay. “You’re in the Caribbean, for God’s sake.”

While its setting may be casual, the Black Pearl—in typical Dye fashion—is no pushover. Like the surrounding reef, Roatán’s first and only golf course can prove painful. The layout does not play along the Caribbean, but the sea is visible throughout, and a quartet of lakes on the back nine ensures plenty of close encounters with water. A jungle-covered mountain provides the backdrop for the all-Paspalum-grass course, which features sharp elevation changes as it cuts into the hillsides.

Despite the mountainous terrain, the Black Pearl is a fairly easy course to walk. Playing it is another matter, thanks to the numerous water hazards, trees in fairways, lengthy waste-area bunkers, and thick marshes where errant shots go to die. The most significant deterrent to low scores is the persistent breeze (which, on a positive note, helps keep the humidity down and the bugs at a distance). Usually out of the northeast, the wind pushes approach shots toward the lake along the par-4 10th hole, blows into the golfer’s face on the long downhill 18th, and comes from the right on 11, an island-green par 3 with an elevated tee and a putting surface surrounded by sand and water. “When you’re a Dye,” Perry says, “you spend a lifetime trying to build an island green that’s different.”

The father-son team also logged significant hours trying to capture the relaxed ambience at Pristine Bay, which, in addition to rental villas and private residences, will be home to a 120-room hotel by early next year. “We tried to match the course to the people who come here,” Perry says. “We made it more naturalist, a little edgy, not flowers and fluff. It’s good for resort play, but it still has the risk–reward that Pete is famous for.”