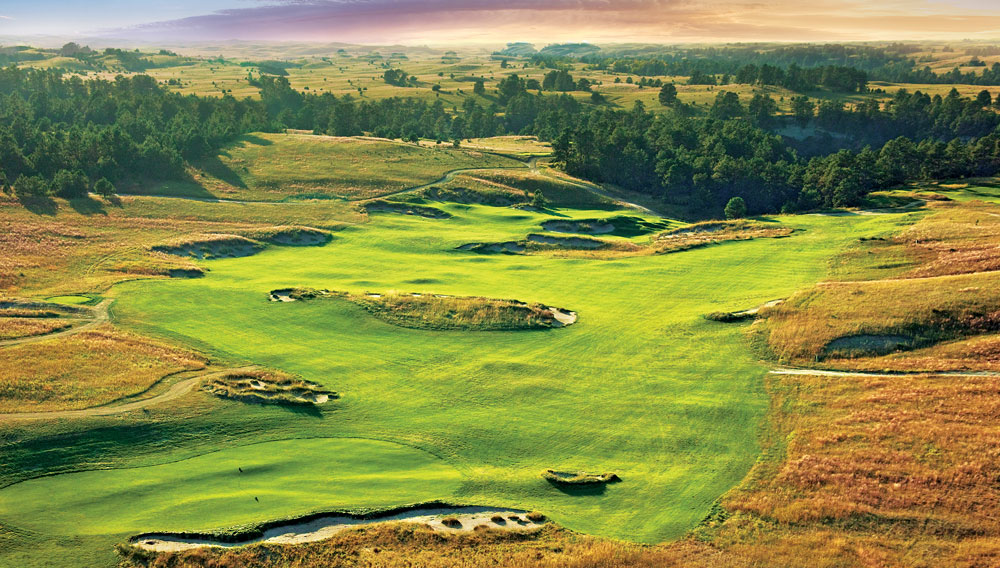 Golfers in search of a British Isles–like experience in America generally head to Oregon’s Bandon Dunes and other cool-climate coastal resorts. But some of the United States’ best British-style terrain can be found in the heartland, in the Sand Hills region of north-central Nebraska, where rolling hills, towering dunes, sandy turf, and long grass add up to a classic canvas for golf.

Several excellent courses—including the Sand Hills Golf Club and Dismal River—have been built in this sparsely populated region in the past decade. The two latest entries are at the Prairie Club, near Valentine, Nebraska (population 2,820), a semiprivate golf club on 3,000 acres of pasture. The vision of Paul Schock, a former venture capitalist from Sioux Falls, S.D., the Prairie Club opened in May with a pair of 18-hole courses, a short par-three layout, a 31-room lodge, and plans for an additional course and accommodations.

The Prairie Club’s long, sweeping 18-hole courses are the work of Tour-players-turned-designers Tom Lehman and Graham Marsh. Lehman seemingly was given unlimited land for the Dunes Course, where some fairways stretch 100 yards across. Still, these cavernous spaces can appear confining when the powerful (and seemingly ever-present) prairie winds are blowing.

Similarly spacious, the Dunes’ greens are oftentimes flanked—but never fronted—by bunkers, thanks to scratch-golfer Schock’s request for open entryways into every putting surface. Schock also wanted a traditional experience at the Dunes, which explains the course’s walking-only policy.

Owing to a more compact routing—and the permissibility of golf carts—Marsh’s Pines Course is slightly tamer than the Dunes. For a completely casual round of golf, Prairie Club offers its wedge-and-putter Horse Course. This fun par-three layout is the work of designers Gil Hanse and Geoff Shackelford, who are currently staking out the club’s third 18-hole course, called Old School, which should open sometime in the next few years.

The Prairie Club, which offers memberships but is open to the public, is also developing guest cabins to supplement the property’s main lodge accommodations. Membership at the club begins at $17,500 (plus $2,000 in annual dues) and includes discounted rates at the lodge and complimentary green fees (from $180 to $220 for nonmembers). The Dunes and Pines courses alternate daily between private and public play, and the Old School course will likely be reserved for members only.