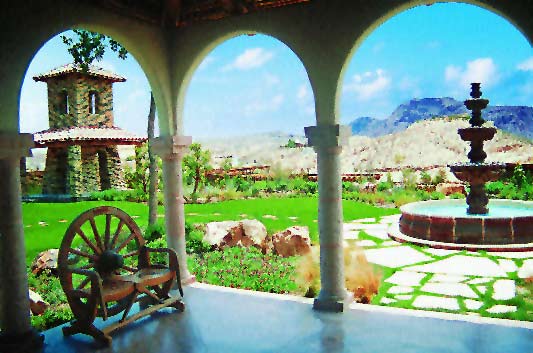 It’s hard to imagine a location in the continental United States more remote than Lajitas, Texas. The nearest commercial airport is almost 300 miles away. Even the nearest grocery store lies 90 miles distant. No wonder Steve Smith calls his new resort “the Ultimate Hideout.”

Set against the base of Big Bend National Park—and along the banks of the Rio Grande separating Texas from Mexico—Lajitas occupies a picturesque patch of southwest Texas that makes Scottsdale and Palm Springs seem downright claustrophobic.

The first golf course in this majestic setting, dubbed Ambush at Lajitas, opened this summer, and another is scheduled for completion in 2004. By next year, the resort will include a 32,000-square-foot spa and a restaurant, Ocotillo, which will be run by one of Austin’s finest chefs, Jeff Blank of Hudson’s on the Bend. But the golf courses are the cornerstone of this $100 million experiment in the middle of nowhere.

Smith rejected the first layout from veteran Texas designers Roy Bechtol and Randy Russell because it looked too much like a typical desert golf course: lots of native areas and waste bunkers. “You don’t understand,” Smith told them. “I want an oasis.” And that’s what they built. Bechtol and Russell moved more than 500,000 yards of dirt and planted 132 acres of sod to create an improbable green carpet amid the desert’s baked browns. That did not come cheaply, but Smith, who pocketed more than $600 million when the company he co-owned, Excel Communications, went public in 1996, is sparing no expense.

In 2000, Smith purchased Lajitas and its surrounding 22,000 acres at auction for $4.25 million. The town began as an outpost for Gen. Jack Pershing’s cavalry troops while they searched for Pancho Villa, and it continues to attract those who do not want to be found: a motley collection of hippie river guides, political separatists, and the occasional smuggler. (For a sample of the local flavor, consider that the unofficial mayor of Lajitas is a beer-drinking goat.) Cell phones don’t work here, and many nearby residents make do without running water or electricity, in stark contrast to the creature comforts Smith is importing.

Smith believes that others in his income bracket—or in the vicinity—will share his appreciation for this isolated setting. He built 800 luxury homesites and upgraded the amenities by adding a water-treatment facility and a 7,500-foot runway for private aircraft. For now, visitors can stay in a newly renovated hotel, but Smith eventually plans to turn the resort into a private club for the homeowners.

If the golf course is any indication, he’s off to a roaring start. The Ambush plays like its name, lulling you to sleep on the front side and then demanding more shot-making on the closing holes. There’s even a novelty hole (number 11a on the scorecard) that allows you to shoot at a green located across the Rio Grande in Mexico. The par-71 layout is accessible to all players, but it’s definitely not a pushover; I played one day with a club pro from Arizona who shot 82.

The second course will be more treacherous, with numerous canyons that require players to carry the ball long distances.

Of course, Lajitas is not for everybody. If you prefer concrete canyons to 100-mile views, stay home. If you need to talk on your cell phone 24/7, find someplace else. But if you’re looking for a true hideout, this is unlike any other.