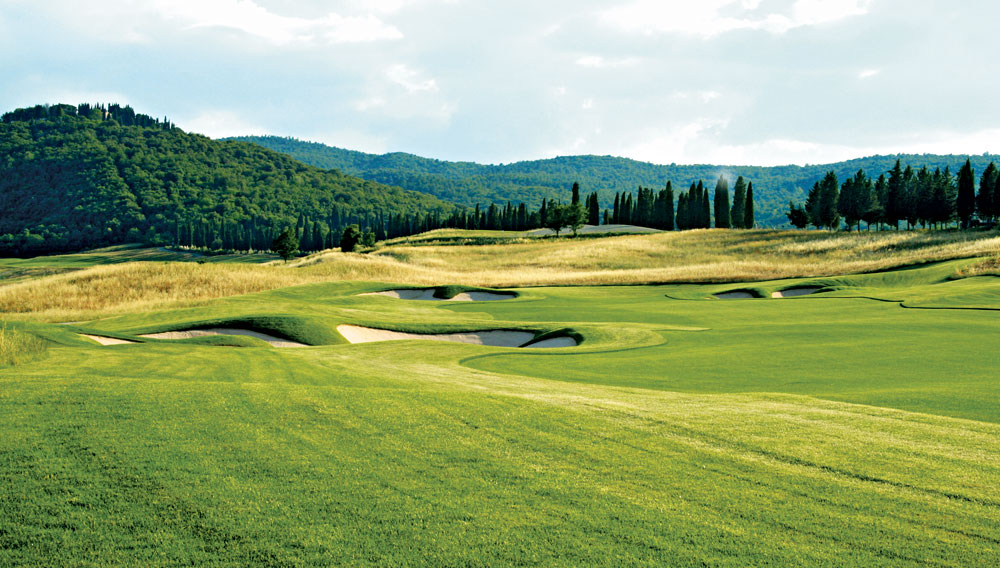 Italy’s riches are innumerable, as any aficionado of art, architecture, automobiles, food, or wine will surely attest. But when it comes to golf, Italians have never embraced the sport with the same gusto they reserve for a Michelangelo or a Maserati. Recently, however, the emergence and growing popularity of Italian professional golfers Matteo Man­assero and brothers Edoardo and Francesco Molinari seem to indicate a shift in attitudes toward the sport, as does, over the past two years, the debut of two noteworthy golf retreats: Argentario Golf Resort & Spa on the Tuscan coast and Verdura Golf & Spa Resort in Sicily.

The latest sign that the pastime is gaining favor in Italy is the Castiglion del Bosco Golf Club, a rousing 7,212-yard layout set within a 4,500-acre wine estate and resort community in Tuscany’s Val d’Orcia (a World Heritage Site described by UNESCO as “the agricultural hinterland of Siena”). The brainchild of Massimo Ferragamo, the youngest of the namesake fashion company’s scions and the chairman of the firm’s U.S. operations, the course is nothing short of a design masterstroke for two simple reasons: “It blends in completely with the natural landscape,” course architect Tom Weiskopf says, “and it looks like it has been there for 100 years.”

Weiskopf, who has built more than 60 courses around the world, brought all of his experience to bear on this project, which required creating a contemporary championship layout on a protected preserve in a country with dizzying layers of agrestic bureaucracy. Opened in June, his finished work is a challenging parkland track with rippled fairways that mimic those of the undulating landscape; strategic “catch bunkers” that, as dictated by local preservation laws, are not visible from the nearby hilltop village of Montalcino; and crafted greens with false fronts that are protected by native grasses. The whole course has a stadium-golf feel, and each hole—whether it follows an allée of cypresses, a winding brook, or parallel furrows of ploughed land—appears its own stage.

The par-72 layout sits in the shadow of Il Borgo, an ancient, pine-covered village whose taupe-colored 17th- and 18th-century buildings have been artfully recast as Castiglion del Bosco’s 23-suite luxury hotel. In addition to the golf course and accommodations, the estate includes nine original stone farmhouses that have been converted into luxury villas, a petite spa, and—this is Tuscany, after all—an osteria, a cooking school, and a winery.