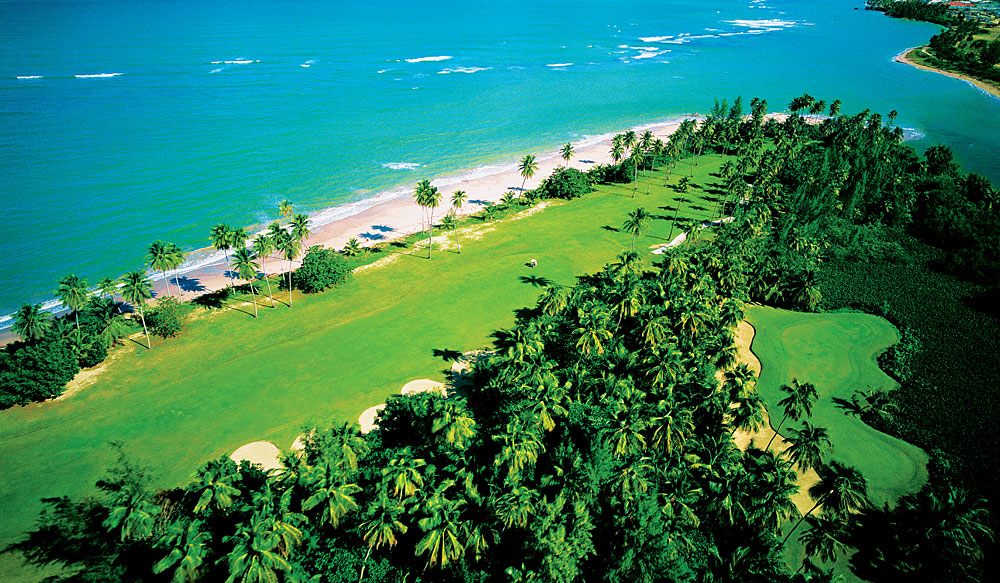 Tim Blackford, general manager of the Bahía Beach Resort & Golf Club in Puerto Rico, steps back from his ball on the course’s 13th tee. Before him stretches a narrow fairway lined with clusters of coconut palms on one side and a saltwater lagoon on the other—a scene that, by now, is familiar to his foursome. “In case you haven’t noticed,” jokes Blackford, “rule number one at Bahía is that the water is on the left and the forest is on the right.”

Blackford’s pronouncement, if not particularly insightful, accurately describes the par-4 13th hole and eight of its 12 predecessors at Bahía. Instead of monotony, however, the course’s routing results in a refreshing departure for Caribbean golf. “So many Caribbean courses have water holes, but then they’re dry inland,” says Blackford. “The key difference with Bahía is how much water we have on the inland part of the course.”

Opened in November, the Bahía course is part of a new resort development set on a former coconut plantation 16 miles east of San Juan. The 483-acre property, which by 2009 will include a 150-room St. Regis hotel and a like number of private residences, is bordered by the Espiritu Santo and Herrera rivers on two sides and a 2-mile stretch of the Atlantic Ocean on another. A network of saltwater lagoons cuts through the heart of the development, and the golf course, as designed by Robert Trent Jones Jr., circumnavigates the waterways before spilling out next to the ocean for the final three holes. “We were able to create a rhythm to the course,” says Jones Jr. “It builds a crescendo toward the water.”

Jones Jr. has designed more than 240 courses worldwide, but Bahía is the 68-year-old’s first project in Puerto Rico, where his father, Robert Trent Jones, built four courses at Laurance Rockefeller’s Dorado Beach Resort from the late 1950s through the early 1970s. Comparisons between the layouts are inevitable, but at least one similarity can be attributed simply to Bahía’s setting: The property’s more than 50,000 mature palm trees—Blackford says he has hired two sets of three workers just to harvest coconuts—lends Bahía the appearance of a course several years its senior.

In a sense, Bahía has been around for years; a public golf course previously existed on the site. “It was what we call in the business a blow-up job,” says Jones Jr. “There are many holes that are in the same space, but we built it from scratch.” His transformation of the property included adding bumps, swales, and bunkers to the formerly flat terrain. “We were working in sand, which is like cutting butter,” he says. “We put a lot of motion in the course, as if the waves continue right into the land.”

The sound of surf helps build the suspense, or crescendo, as you approach the Atlantic on the 14th and 15th holes. Once you arrive at the shore, Bahía does not disappoint. Although the three closing holes do not demand dramatic shots over the ocean, they continue Bahía’s emphasis on water—in this case, on the left and right. But if the final three holes stray from Blackford’s first dictum, they at least abide by his second rule of golf at Bahía: “Hit it straight and long,” he says, “and you have nothing to worry about.”