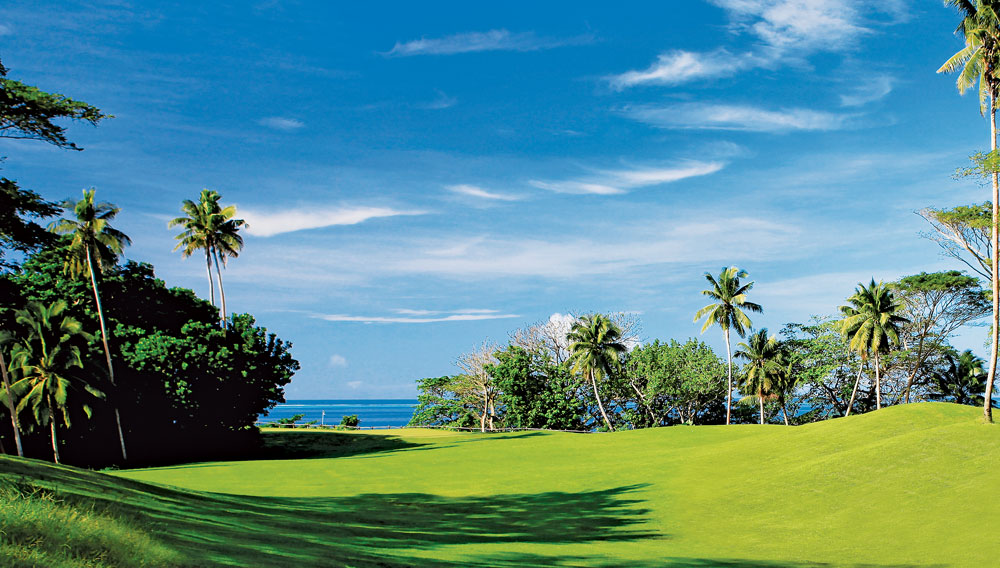 David McLay Kidd has proven that he can create remarkable courses in remote places. But the Scottish golf architect—designer of the Bandon Dunes golf course on Oregon’s southern coast—says he was “dumbfounded” when he was approached to build a course on a private island in Fiji. Still, he figured, it couldn’t hurt to take a quick trip to paradise to have a look.

Kidd’s journey to the proposed site, which he first visited in 2005, involved landing at Fiji’s international airport in Nadi, taking several inter-island flights, riding 45 minutes on a bus, and then spending 45 minutes on a boat before arriving at Laucala Island. “That’s all to say,” he says, “when I got there I really felt remote.”

Since that first visit by Kidd, Laucala Island has added a private airstrip and two hangars—as well as 25 villa accommodations (priced from $3,600 per couple per night), five restaurants, a beach club and activity center, swimming pools, a chapel, a gym, a Fijian village, an equestrian center, and a spa. The 3,000-acre island, which opened as a resort at the end of 2008, also now includes Kidd’s latest—and most exclusive—creation. “Everyone will hear about this course and will want to play it,” says Laucala’s golf pro, Tony Christie, a New Zealander who played on the Australian PGA Tour. “But only so many will be able to afford it.”

When Kidd eventually signed on to build the course at Laucala, his only directives from the island’s Austrian owner, Red Bull founder Dietrich Mateschitz, were to be as light-handed as possible and to leave the trees untouched. So Kidd designed the course as he found it—winding underneath the coconut palms on the northeastern side of the island. “We had to build the course out of the jungle,” he says. “We came up with some very simple thoughts, but we didn’t have accurate plans to design with.”

The par-72 course, which debuted nine holes last spring and the final nine in the fall, is as much of an adventure to play as it was for Kidd to design. “When you’re on hole three you don’t know where hole two was because you can’t see it anymore,” says Christie. “You come out here and lose yourself.”

The adventure begins in the saddle between the island’s two highest hills. By the fourth tee, the undulating terrain has led to what feels like the edge of a platform diving board, below which the fairway plummets toward a freshwater wetland. Hole five finishes with the course’s first ocean view, but the best vistas appear at the juncture of the eighth and ninth holes. “The holes form a crucifix,” says Kidd. “The peninsula next to the first ocean bay is so cool that we wanted to use it twice—and we could, since there’s likely to be no one behind you when you’re playing at Laucala.”

Indeed, a round at Laucala’s golf course will rarely, if ever, be impeded by crowds—or anything else. “It’s rare these days to build a course that’s unencumbered by roads and power lines, things that break the magic of just playing golf,” says Kidd, who reports that Mateschitz, though not a golfer, is pleased with the design. “I believe he uses the course as a walking trail, and I suppose it works as well for that as it does for golf.”