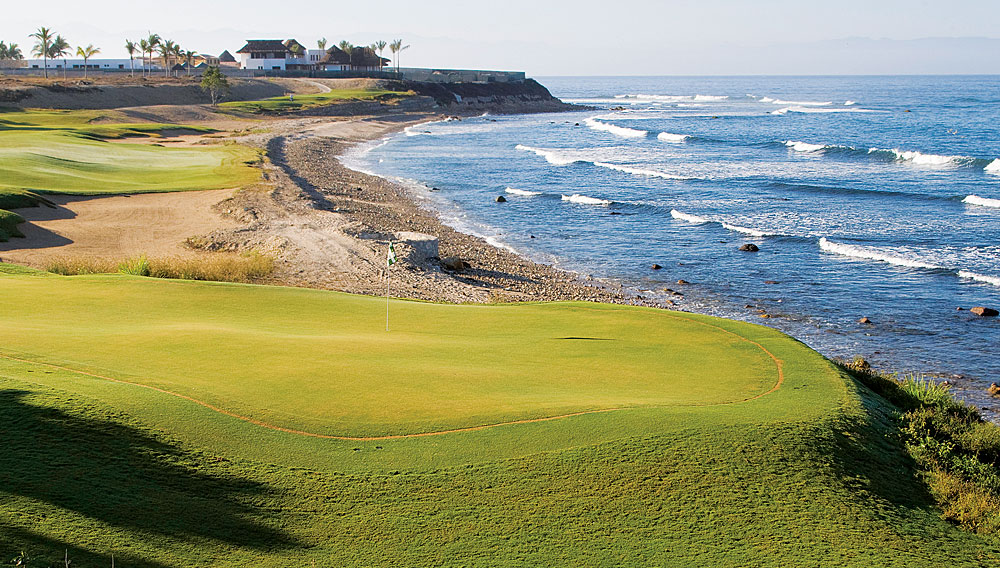 The grumble of construction trucks drowns out the rumble of surf on the oceanfront 17th hole at the Punta Mita Club de Golf’s new Bahia course. The racket detracts from this otherwise serene setting on Mexico’s Pacific Coast, but the disruption is not unwelcome. At a time when many resort projects have been put on hold indefinitely—or worse—Punta Mita is plowing forward with new developments and debuts.

Set on a peninsula about 25 miles northwest of Puerto Vallarta, the 1,500-acre Punta Mita resort community features nine and a half miles of coastline dotted with multimillion-dollar homes, private beach clubs, and Jack Nicklaus–designed golf holes. Among the recent signs of Punta Mita’s progress are Nicklaus’ Bahia course and a new St. Regis resort. The 120-room property, which joins a 10-year-old Four Seasons hotel at Punta Mita, opened last November on a 22-acre beachfront site adjacent to Bahia on the peninsula’s western tip.

Officially opening this November, Bahia is Nicklaus’ second course at Punta Mita, following his now-famous Pacifico layout that debuted along with the Four Seasons in 1999. (Both courses are open to guests of the Four Seasons and St. Regis hotels, as well as Punta Mita homeowners.) Known for its picturesque bonus hole—an optional par-3 with a green set on a natural island just offshore—Pacifico offers ocean views from nearly every hole and plays along the water for nine of them.

Though Bahia is Punta Mita’s second course—a status that at many resorts means a lesser location—it, too, offers ample exposure to water, owing largely to the development’s abundance of shoreline. The sea seldom comes into play on the course, but five of Bahia’s 18 holes front the Pacific.

The ocean makes its first appearance near Bahia’s second green, which sits above a rocky beach. But the course’s most dramatic stretch begins with the 15th hole, a 462-yard par-4 that undulates and bends toward an oceanfront green. After a 217-yard par-3, the 17th hole offers a reprieve on distance but not difficulty: The short dogleg left, which follows the contour of a cove, requires a carry over rocks and sand to a green perched just above the water. And while Bahia’s 18th hole at first appears anticlimactic—the tee looks out to a gaping fairway with no signs of sea—the layout soon opens up to views of ocean, islands, palm trees, and the villas at the St. Regis.

The St. Regis promises to be popular with golfers because of its proximity to Punta Mita’s courses: The new hotel, unlike the Four Seasons, is within walking distance of the clubhouse for Bahia and Pacifico. Nongolfers will also find reason to applaud Punta Mita’s recent progress, as the St. Regis features one of Mexico’s better spas—a 10,000-square-foot Remède facility—plus family and adult infinity pools, a children’s club, a beach club, and suites with private beachfront pools and butler service.