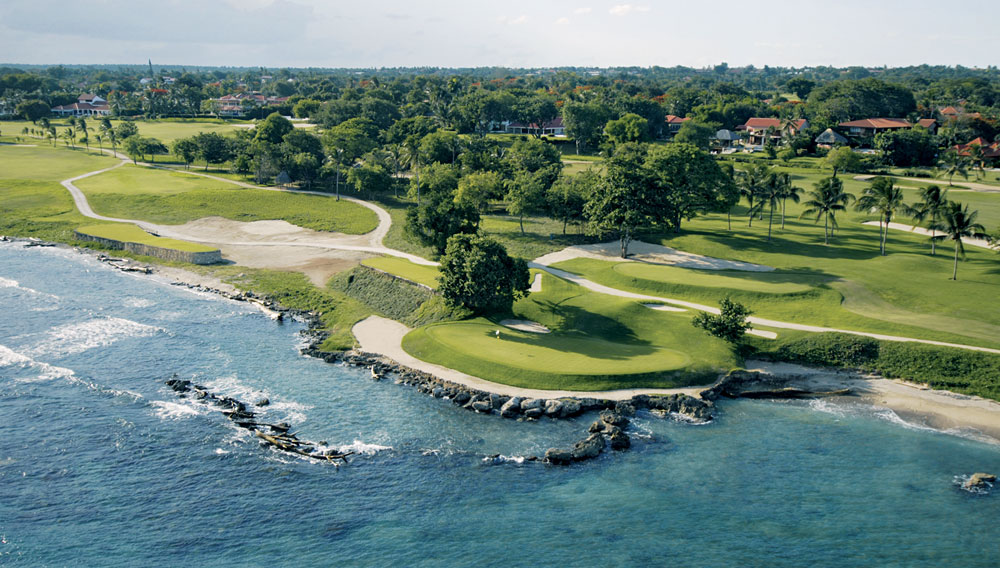 If golf architect Pete Dye ever decides to retire, Teeth of the Dog will lead his legacy. More than 40 years after it opened in 1971, the magnificent seaside layout (think Pebble Beach with palm trees) at the Dominican Republic’s Casa de Campo resort remains the Caribbean’s premier golf course. The 86-year-old Dye, meanwhile, is still sketching great courses the world over—and still putting his finishing touches on Casa de Campo.

In addition to Teeth of the Dog—plus a luxury hotel, villas, restaurants and shops, a spa, beaches, tennis courts, shooting ranges, polo fields, and more—the 7,000-acre Casa de Campo is home to 72 golf holes, all designed by Dye. The architect recently added nine new holes while renovating 18 existing ones, helping to solidify the resort’s status as the top golfing destination in the Caribbean.

Dye’s new Lagos nine brings to 27 the number of holes at the resort’s Dye Fore complex. From a dry and flat expanse, the designer concocted a rolling layout with five lakes, acres of sand, and, in keeping with the other courses on the property, wide fairways and deceptive greens. “There’s plenty of movement up there,” Dye says of Lagos. “But it’s not excessive, and it’s not hard to walk. The holes around the lakes are flat, and the long views are great. You can see mountains, ocean, and down to the river.”

As part of Dye Fore, Lagos joins the La Marina and Chavon nines, the latter of which sits high atop cliffs overlooking the Chavon River. Lagos and Chavon are being integrated as one 18-hole course, which could eventually rival Teeth as Casa de Campo’s top dog.

The resort’s follow-up to Teeth, the Links, opened in 1976 on an inland stretch. The oddly named layout—it is marginally links-style at best—has never matched the popularity of its coast-hugging predecessor, but recent tinkering by Dye has made it a requisite round at Casa de Campo. His biggest change to the course was to switch to Paspalum grass on the greens, which, given a little seasoning, will offer rolls as fast and true as the rest of the resort’s putting surfaces.

The updated Links layout offers the gentlest introduction to Dye’s diabolical trademarks of speed, sand, and stealth, making it the smart choice for a warm-up round before cutting your teeth at Casa de Campo.