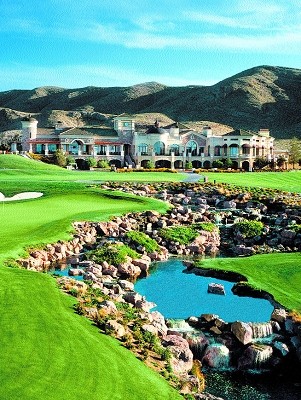 Las Vegas, with all its diversions, is a noisy place where one’s senses are assaulted with a never-ending cacophony of sounds and pictures promoting the latest shows, nightclubs, restaurants, and gaming rooms. Only a fool, of course, would visit Vegas seeking peace and quiet, yet one place does exist, for the properly initiated, where the clinging and clanging of the slots do not reach and Black Jack tables hold no quarter. Southern Highlands Golf Club, which is about to launch a national membership drive, is within sight of the Strip yet has nary a neon light nor jarring noise within its gated environs.

Southern Highlands is a rarity in the Las Vegas area: a private golf club reserved for members only. It’s surrounded by a real estate development; nevertheless, the club is an independent entity, with membership by invitation only. Owner Garry Goett, a successful developer of Southwestern shopping malls, hopes to attract an elite list of avid and accomplished golfers who will appreciate the atmosphere of the place, with its no-tee-times policy, caddies assigned to every group, and casual but responsive service.

Goett had in mind models such as Seminole, Pine Valley, and Cypress Point for his club at Southern Highlands, which includes a handful of tasteful golf cottages for use by out-of-town members. These standards show in the quality of the course, the final collaboration of Robert Trent Jones père et fils. It was completed two years ago, just before Trent Jones Sr. died. Built on the edge of the Las Vegas valley, hard against the sloping mountain walls, Southern Highlands contains some wonderfully diverse terrain, complemented with an amazing variety of imported trees and plants. From the elevated tee box on 11, the entire valley spreads out below, and the Strip, with its pyramid, Eiffel tower, and faux New York skyline, glistens like Oz in the warm Nevada sun.

While the front nine is pleasant, it is just a warm-up for the challenges of the back side. The holes grow longer and longer as they wind up and down the severe foothills before culminating in the devilish 17th, a long par-3 over water, and the par-5 18th, riven by a babbling, rock-strewn brook. A short route lies left of the water, but it is narrower and thus more risky. The safer fairway to the right is longer and demands a third shot over a stepping-stone waterfall to find the tiny green.

After a game, few places could be better to savor victory or assuage defeat than the 42,000-square-foot clubhouse at Southern Highlands. It is designed in Tuscan style, with stuccoed arches and ceiling murals giving way to the stone-and-timber masculinity of the expansive men’s lounge. Members can sample the contemporary American cuisine, backed by an excellent selection of wine, outside on the patio or in the formal dining room, behind floor-to-ceiling picture windows overlooking the valley. The Strip, with all of its attendant hubbub, is only 10 minutes away, but if you couldn’t see it from the club, you wouldn’t believe it could be that close.