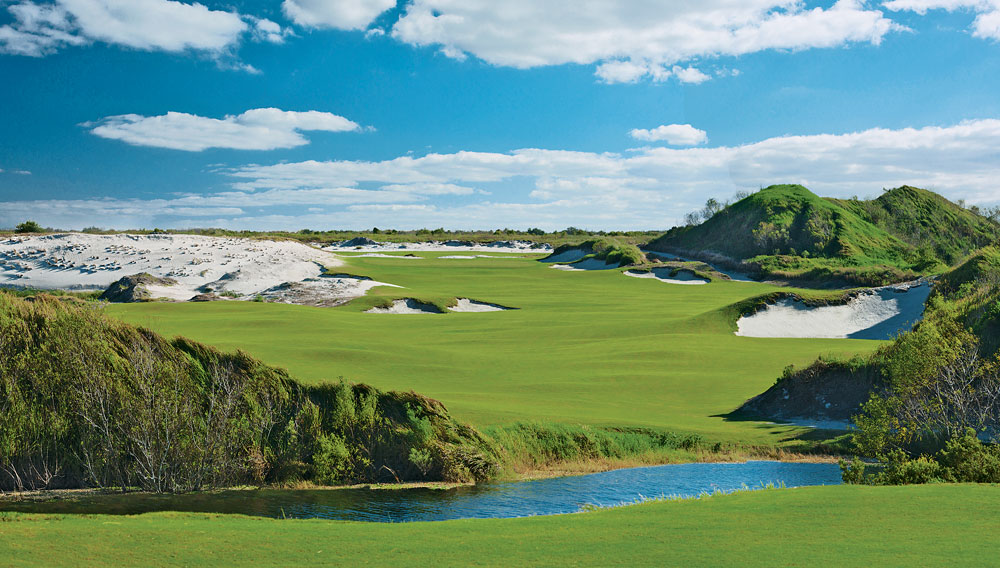 Every few years, the golf world begins to buzz with news of the Next Great Destination. It happened with Oregon’s Bandon Dunes Golf Resort in the late 1990s, and more recently with Scotland’s Castle Stuart and Nova Scotia’s Cabot Links. The latest in this line of highly anticipated resorts is located miles from civilization, in central Florida, where Tom Doak and the team of Bill Coore and Ben Crenshaw recently completed two courses unlike anything else in the Sunshine State.

The Streamsong resort is set roughly between Tampa and Orlando, but the property’s Blue (Doak) and Red (Coore and Crenshaw) courses defy preconceptions about Florida golf. Fashioned amid soaring sand dunes, great gashes in the earth, and natural vegetation that is more high desert than Hialeah, the courses recall links-style layouts in Nebraska, the Pacific Northwest, and even southwestern Ireland. The two 18-hole tracks, which opened for play at the end of January, sprawl over vast expanses of the rolling terrain and are highlighted by cavernous bunkers, massive waste areas, and challenging green complexes. But nothing about either layout looks artificial; instead, both courses appear to have been uncovered from the existing land, as if golf greatness were lying beneath the surface, waiting to be revealed.

In a sense, Streamsong’s terrain had been groomed for golf long before the architects’ arrival: The 16,000-acre property (with that much land, it is safe to assume more courses will follow) occupies the former site of a phosphorus mine, and many of the sand piles, lakes, and gorges that now define play on the courses are the result of decades of digging and dredging.

Though heavily influenced by their dramatic setting, Streamsong’s Blue and Red courses are vastly different. Both layouts are designed for walking (with caddies and carts available), but the Blue course is wider, more forgiving, and more finely tuned, while Red is more difficult and ragged, and likely to be favored by golfers with lower handicaps. Unlike at most multicourse facilities, which keep their routings at a distance from each other, the two layouts at Streamsong cross and intertwine, and the architects even collaborated on a few holes.

The Blue and Red courses begin and end at Streamsong’s striking wood-and-glass clubhouse, which includes a pro shop, an outdoor terrace, and 12 guest rooms. A full-service lodge—with 216 rooms, a spa, a swimming pool, and restaurants—is scheduled to open by the end of this year.

In addition to golf, Streamsong will eventually offer bass fishing, shooting, and miles of hiking and bird-watching trails. But this newfangled Florida resort—like Bandon Dunes and other must-play destinations before it—will undoubtedly be defined by its golf.