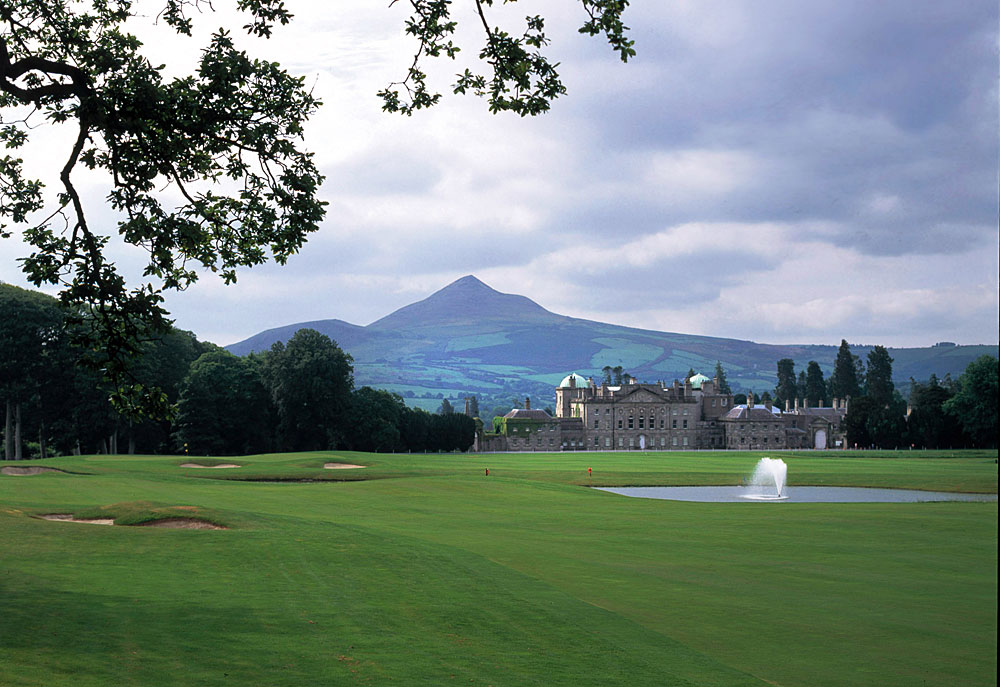 The 16th tee of the Powerscourt Estate’s West Course invites lingering. You will want to stop at this hillside spot 12 miles south of Dublin, Ireland, and enjoy the sweeping views across the valley to the 1,700-foot-tall Great Sugarloaf Mountain. You also might need a minute or two to compose yourself before confronting the 574-yard par 5 and its narrow fairway, which is split down the middle by a row of bunkers. The slightest loss of control will send your drive into a forest of Sitka spruce on the left or a field of yellow-flowered gorse on the right.

In the 12th century, the Anglo-Norman Le Poer family (later changed to Power) built a castle on this estate near the foot of Great Sugarloaf. Today, the 1,000-acre property is home to a new Ritz-Carlton hotel and two especially scenic golf courses. The West Course, designed by David McLay Kidd, opened in 2003, while the East Course, a 7,012-yard moorland track designed by former Walker Cup captain Peter McEvoy, debuted in 1996 and hosted the Smurfit Irish PGA Championship in 2001.

McEvoy followed the ice age topography of County Wicklow (from the Irish word vikinglow, which means meadow of the Vikings) and produced a course that meanders over long rolling hills framed by forests of spruce and oak. Kidd took a much different route. “He really had to build this one,” says Powerscourt Estate manager Don Clarke. “It is shoehorned in between the East Course and a steep hillside. They moved a lot of dirt.”

The tee on the par-5, 595-yard first hole sits directly in front of the broad facade of Powerscourt House, the family’s ancestral home. The tee looks out over a wide fairway that might deceive you into believing that similarly generous landing areas are going to follow. However, a short walk through a dense line of lime trees to the second hole dispels such illusions.

The view from the second tee reveals a hilly course (with an elevation change of more than 80 feet) and few if any obvious signs of Kidd’s earthmoving. Stands of centuries-old pine forests come into play on many holes, and other mature trees dot the landscape. (The enormous horse chestnut behind the 11th green has the greatest girth of any in Ireland, according to Clarke.) All four of the course’s par 3s play downhill to large, undulating greens guarded by shallow, links-style bunkers.

The elevated green on the West Course’s par-3 17th provides remarkable views of Sugarloaf, much of the estate, and the tiny village of Enniskerry, just outside Powerscourt’s gates. Just off Enniskerry’s common is the Powerscourt Arms pub, where you can enjoy a dry stout, just as Samuel Beckett would have done years ago while resting during his walks through the area from his home in nearby Rathfarnham.

You also can order a Guinness in the Sugar Loaf Lounge at the Ritz-Carlton Powerscourt. Guests in the seven-story hotel, which opened last fall with 124 suites, a 30,000-square-foot spa, and a Gordon Ramsay restaurant, enjoy preferential tee times. The hotel’s design is supposed to embody the principles of neoclassic Palladianism: clarity, order, symmetry. Whether you play the West or East course, applying those same principles to your golf game should improve your score.