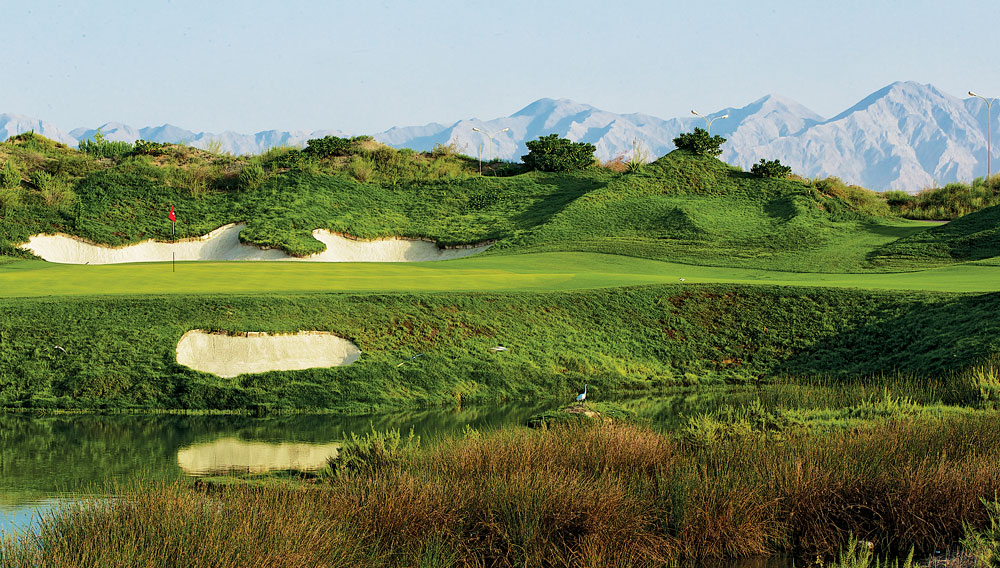 With its rugged wadis, ancient-fort-studded mountains, and 1,300 miles of coastline, the Sultanate of Oman has long attracted adventurous travelers, especially those from Europe. Like the United Arab Emirates, its neighbor to the northwest, Oman has recently started buttressing its natural and cultural attractions with new resorts and developments. But the country’s relatively low-key projects—which include the standout Six Senses Zighy Bay on the Arabian Sea, the forthcoming Alila Jabal Akhdar in the Al-Hajar mountains, and the Royal Opera House and soon-to-open National Museum in Muscat—pale in comparison to the $2.5 billion resort community that is rising along the modern capital’s coast.

The Wave, Muscat, which is scheduled for completion in 2019, will eventually comprise 4,000 residential units, a marina, several restaurants and retail outlets, and a Kempinski hotel, among other properties. The development’s first major debut—the Greg Norman–designed Championship Course at Almouj Golf—already represents something of a sea change for Oman.

Playing along a 3.5-mile stretch of coastal dunes, the 7,310-yard links-style Almouj Golf opened in late 2011 as only the second grass course in the country.(Other clubs in Oman have fairways and “greens” made of sand.) The eye-catching layout features sunken fairways, bunkers partly filled with crushed white Omani marble, and generous rolling green complexes that, says Norman, “incorporate land forms and plant material that mirror the surrounding countryside.”

Norman calls Almouj Golf“one of the most beautiful and unique courses I’ve ever been involved with.” Indeed, five of the club’s contoured holes are set directly on the azure Gulf of Oman, while another four play around a pair of inland lakes, affording near-constant water views. But thevistas—which also incorporate the peaks of the Al-Hajar mountains as a backdrop—may be the only constants on the course: Coastal winds can drastically change the way Norman’s layout plays, although the premium is always on distance and trajectory control.

The Kempinski hotel at the Wave is not scheduled to open until 2015. In the meantime, travelers interested in discovering this emerging Arabian destination can stay at the beachfront Chedi Muscat, located about 10 minutes away by car. According to Norman, golfers who make the journey will not be disappointed. “Oman is really the antithesis of a Dubai or an Abu Dhabi,” he says. “We’ve worked hard to make sure the course has much of the same character, so the golf experience is just as unique.”