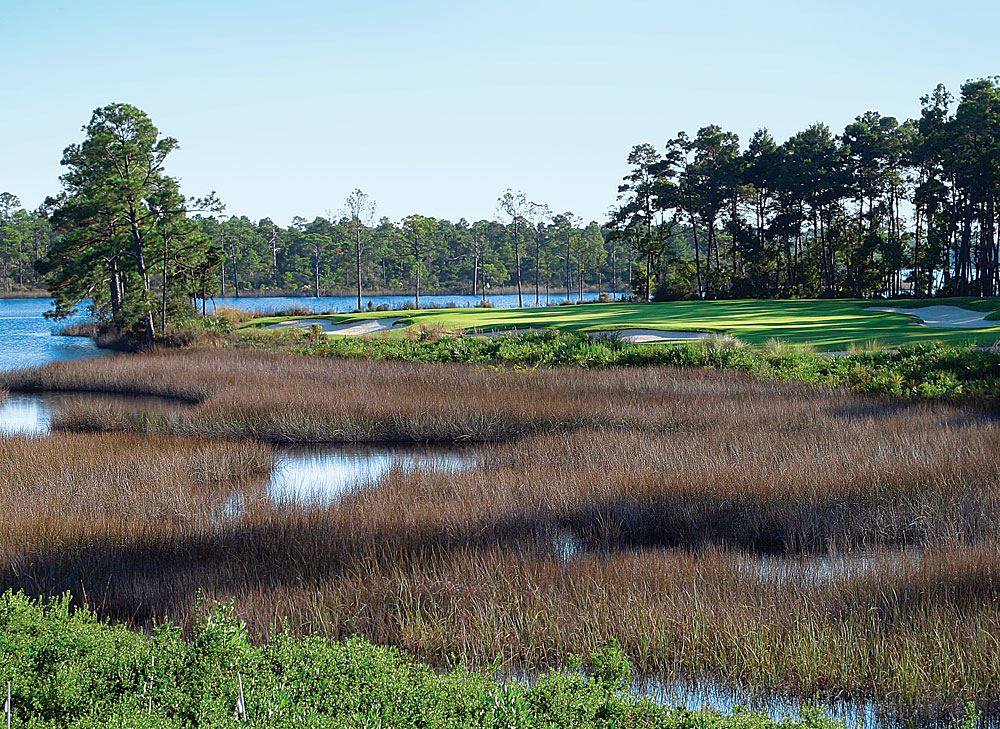 The view from the 13th green at the Shark’s Tooth golf club may be obscured, but few locations offer a clearer perspective of Greg Norman’s design philosophy. Looking back toward the tee of the 531-yard par 5, you see a fairway pocked with bunkers and crowded by oaks and loblolly pines. What you do not see, at least at first glance, is the lake that borders the 13th hole and several other stretches of this course 15 miles east of Santa Rosa Beach on Florida’s Panhandle. Where other designers might have found the proximity of the water irresistible, Norman retained the towering, sound-dampening, view-blocking flora to create a green on which putting is less a mundane act than it is a holy rite performed in a grand cathedral.

Norman built Shark’s Tooth in 2002 as a members-only golf club. This fall, after its acquisition by real estate development company St. Joe, the 7,204-yard course opened to guests of the firm’s Watercolor Inn, a stylish, 60-room retreat on Santa Rosa Beach (a stretch of sand so fine and white that local legends speak of unscrupulous entrepreneurs who sold it as sugar during World War II). In addition to Shark’s Tooth, guests of the inn have access to another semiprivate course, the design of which presents a sharp contrast—and the perfect complement—to Norman’s understated layout.

Built in 2001 by Tom Fazio, the St. Joe–owned Camp Creek course is a 7,159-yard stunner that demonstrates how the Panhandle’s topography can be transformed. While Norman barely altered the landscape at Shark’s Tooth, Fazio, as he is prone to do, moved mountains at Camp Creek. “It was somewhere between 1 and 2 million cubic yards, no one really knows,” says the course’s general manager, Will Hopkins, of the amount of dirt Fazio used to form this striking dunescape.

Long swales bisect Camp Creek’s fairways, which run between hummocky pines and man-made ponds. Though landing areas are generous, Fazio played with sight lines, causing you to doubt the designer’s charity. A fair example is the 178-yard 14th hole, where a large green, when viewed from the tee, resembles a postage stamp. A pond that borders the entire right side of the hole, a deep bunker directly in front of the green, and the surrounding patches of gorse contribute to the visual trickery—and lure the stray shots of intimidated golfers.

To prepare for the challenges of both Camp Creek and Shark’s Tooth, Watercolor guests can warm up on the inn’s new Origins Course. Designed by Davis Love III, the layout is a throwback to the six-, nine-, and 12-hole courses that once were common in Scotland. Origins can be played as a regulation course of six holes or as a 10-hole par 3, simply by changing tee boxes. However you play the course, Origins—like Camp Creek and Shark’s Tooth—will alter your perspective of golf in the Panhandle.