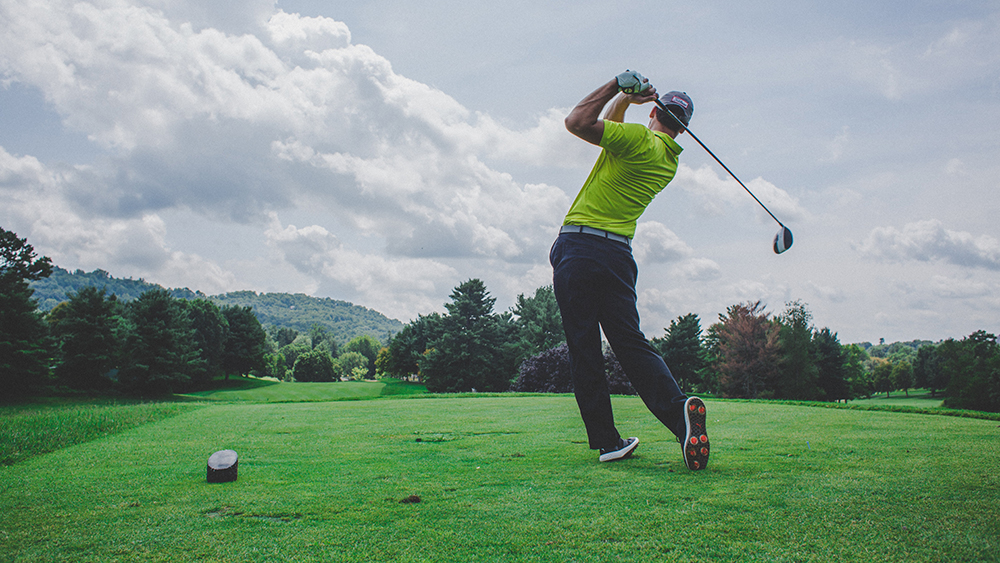 I’m not proud of myself. There we were, my son and I, not more than 100 yards from the 16th green, waiting once again for the “gentleman” up ahead to get the damned ball in the damned hole. As he lined up his third putt—squat, hold up a finger, close one eye, walk ’round for a confirmatory view from the other side—for what I calculated would be a triple-bogey seven, I yowled, “Come on, Tiger!”

I’ve been playing golf for nearly 35 years and was schooled in the game’s ancient codes by my father. Golf etiquette, I know well, dictates one does not holler sports-bar ironies at nearby players as they stand over testy three-foot, downhill, left-to-righters, even if watching is like waiting for the punch line in a Soviet leader’s Five-Year Plan speech.

But after 15 holes without any suggestion we might be waved through—as etiquette suggests would be the upstanding thing to do—I felt my enthusiasm for the niceties of the game abandoning me.

Two holes and half an hour later, I plucked my ball out of the cup, removed my wool hat and shook my son’s hand. Our round, just the two of us, had stretched to four hours and 30 minutes.

When I was my son’s sort of age, my father and I used to career around a golf course in three hours, give or take the odd whiff. Once on a sunny summer’s evening, we played our local course in two and a half hours. We talk wistfully of it now.

Golf nowadays takes forever. Five-hour rounds have become agonizingly normal. Why? Some of the blame lies at the door of longer, harder courses designed for riding carts, where greens and tees can sit hundreds of yards apart (which might look more appealing in a post-coronavirus, lessons-learned world, actually). But I don’t think they’re entirely to blame.

Far more culpable are the gearheads who futz around with distance gizmos, or who treat golf as some kind of pathway to betterment, managing a round in almost religious subservience to detailed plans laid out by web gurus and their cash-cow online courses. And let’s not forget amateurs like my friend up ahead, who are in thrall to the deliberations of slow-play specialists such as tour pro Bryson DeChambeau.

Slow play is the crime that will kill golf. Not the whiskey-swilling old duffers who don’t want to let the womenfolk into the club except to buy Christmas presents for their husbands, although the grillroom-cocktail generation are responsible for golf’s loss of face with today’s more open-minded youth. The sport’s expense is also not culpable for killing the future of the game. Around the world, clubs with six-figure membership fees are enjoying high demand, and many specialist equipment manufacturers are still printing money.

No, golf’s great problem is that it has become slower at a time when the world has sped up. When life is a 4K blur and switching off is a distant second to being always on, some might call the ponderousness of golf a virtue, and to a point, it can be. But slow works only until the mind begins to wonder if time couldn’t be better spent. Until it gets bored—or, in the case of this golfer, shouty.

All is not lost, however. This year, the European Tour introduced a slow-play rule, which appears to be speeding the game up, although not by much. At the same time, golf participation in the US is actually rising. The National Golf Foundation calculated that, between 2014 and 2018, total golf participation went up from 30 million to 33.5 million players. Business is good, too. In 2018, the World Golf Foundation tallied the economic activity of golf in the US for 2016 at about $84 billion a year, up 22 percent from its 2011 figures. Golf isn’t dead yet.

But solid numbers can’t mask the problem. Much of that participation growth was in off-course simulator experiences such as Topgolf, which is bowling with golf balls. Golf’s authorities still need to focus on getting golfers through courses more quickly. Otherwise, they’ll find something else to shout about.