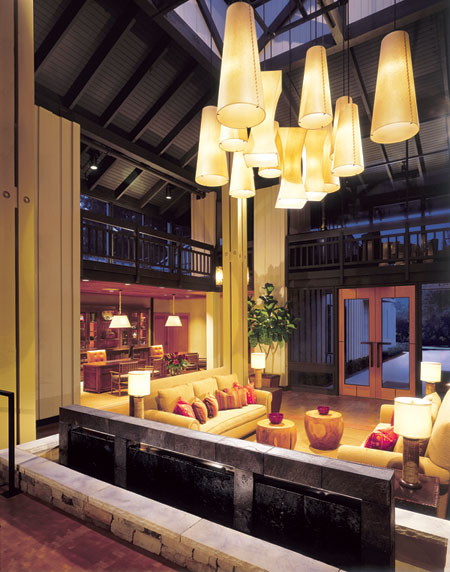 It may seem sacrilegious for a golfer to visit the Monterey Peninsula and not stay or play at Pebble Beach. But an excellent alternative to that sacred ground along Seventeen Mile Drive has long existed just a few miles east in Carmel Valley. After completion of a major refurbishment in July, the Quail Lodge is better than ever.

In December 2002, the Peninsula Hotel Group, in a partnership with local hotelier, vintner, and former Dutch racecar driver Ben Pon, initiated a rapid-fire, seven-month construction program at the nearly four-decade-old Quail Lodge. The new owners redecorated the 97 rooms and suites in rustic, earthy tones and added feather beds and plasma-screen televisions. The resort’s $25 million renovation also included an overhaul of the golf clubhouse, which now features meeting and banquet rooms, an exercise facility, a swimming pool, and Edgar’s, an informal 19th hole and restaurant.

A nine-hole putting track wends its way between the buildings at Quail Lodge, but it is just a warm-up for the resort’s real attraction, the Robert Muir Graves–designed championship course. Set along the Carmel River, the Golf Club at Quail Lodge features a front nine that is wider and more inviting than the back nine, where the fairways are lined by the river and a series of ponds. Teaching pro Ben Doyle can help you cope with these challenges, but you may have to wait until he has finished working with Steve Elkington or one of a dozen other touring pros before he casts his expert eye on your swing.

At the lodge itself, a new spa and wellness center complements the resort’s boccie courts and miles of walking trails. Adjacent to the resort is a farm run by Earthbound, the nation’s largest purveyor of organically grown produce. Quail Lodge chefs shop for their ingredients at the farm—and the resulting menu will not disappoint. The famous Covey restaurant—long considered the place in Carmel for rack of lamb—is home to a new bar and a new executive chef, Jeff Rogers. Rogers works closely with Cal Stamenov, the chef who has made Bernardus Lodge, another Ben Pon property in the Carmel Valley, a top culinary destination. Naturally, both restaurants serve the best vintages from Pon’s own Bernardus Winery.

During the famed Concours d’Elegance at Pebble Beach, the Quail Lodge sponsors a smaller, more intimate motorcar rally, featuring many of the 1960s-era sports cars that Pon raced on the European circuit. But the resort—quiet, classy, and always basking in the valley sunshine—should not be compared to that famous place with the pebbles; it does quite well on its own merits.