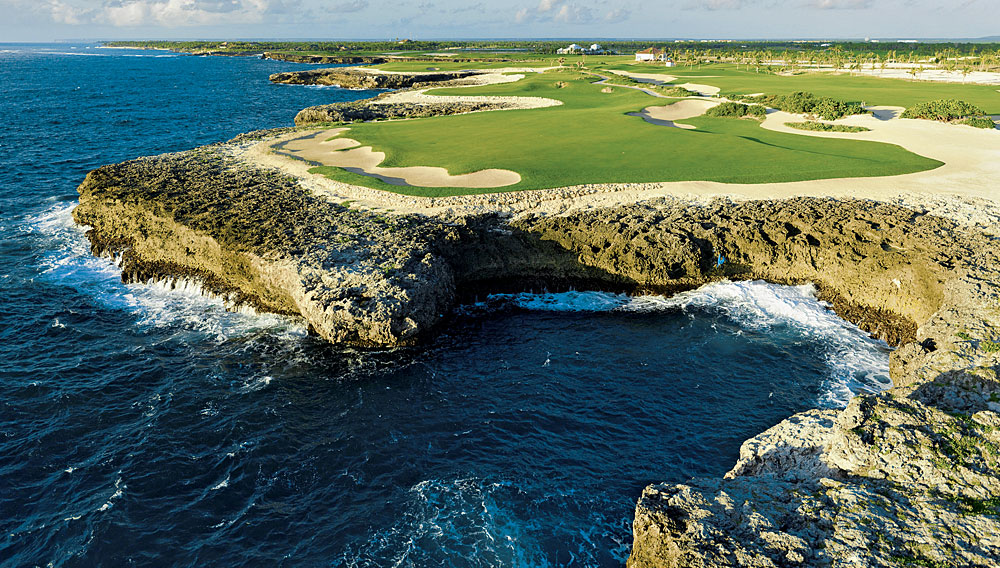 Frank Rainieri and Tom Fazio are a perfect twosome. Rainieri, CEO of the Puntacana Resort & Club in the Dominican Republic, dreams of making his property the Caribbean’s top golf and beach resort. Fazio, the renowned golf architect, says he “helps people fulfill their dreams.” With the opening of Puntacana’s Corales course—a bold, windswept layout that hugs the Atlantic—their ambitions align in spectacular fashion.

The Puntacana resort spans 26 square miles on the Dominican Republic’s east coast, an area that a few decades ago was untamed jungle fringed with white sand and coral reef. “We knew what God had given us,” says Rainieri, a Dominican developer and hotelier, “but we lacked the resources to develop it.” A break came in the 1980s, when the Dominican government allowed Rainieri and his partner, New York attorney Theodore Kheel (fashion designer Oscar de la Renta and singer Julio Iglesias joined as investors in 1997), to build an airport in the Punta Cana area; today, it welcomes about 2 million visitors a year. The partners also built hotels—including the elegant Tortuga Bay villa retreat—residences, and the P.B. Dye–designed La Cana golf course, which debuted in 2001.

Opened this April, Corales promises to perpetuate Puntacana’s rise—and stimulate the senses of golfers. The course is a vibrant palette of blue sky and sea, white sand and coral, and green paspalum grass. Just as intense is the wind, a steady presence that affects every shot. To accommodate the current, Fazio carved wide fairways and heaved the landscape, placing greens high and low and protecting them with gaping bunkers and rippled terrain as billowy as the nearby surf.

Two holes—the third and 15th—have two greens each, which alternate daily. “When Frank heard that Pine Valley had a hole with two greens, he wanted two holes like that,” says Jay Overton, Corales’ director of golf. “He wants this course to be regarded as one of the world’s best.”

Both nines finish along the ocean, where waves crash against retaining walls, cooling players with a fine mist. The final three holes have been dubbed “Devil’s Elbow” (another nod to Pine Valley, which has its own, more vulgar, allusion to satanic anatomy), because they start inland and then crook to the sea, crossing foaming blowholes before ending at greens that teeter above the ocean.

More hospitable environments await golfers at the end of a round at Corales. In addition to its golf courses, Puntacana features three miles of beach, a Six Senses spa, an ecological reserve, and a marina. In the coming years, the resort will also offer new options for golfers: La Cana is scheduled for a face-lift, and another P.B. Dye course, an inland layout called Hacienda, will open in 2011.