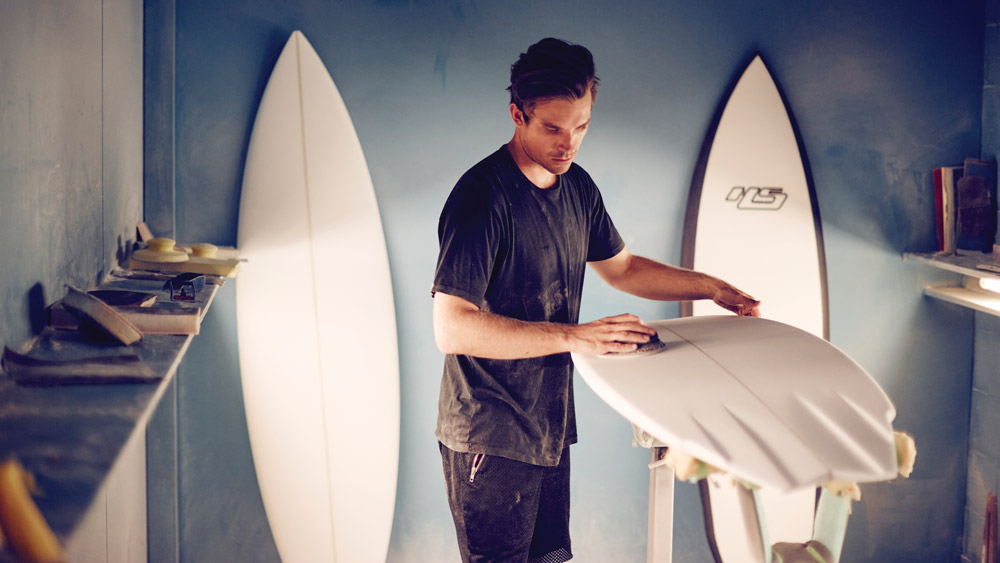 A surfboard that not long ago spent several weeks being shaped in the Sydney factory of Haydenshapes is now carving through eight-foot waves off the coast of Hawaii. As one of the world’s most in-demand surfboard manufacturers, Haydenshapes has grown from just a handful of staff to 30 in-house employees and another 200 distributing and manufacturing these artworks of wave-shredding beauty. It’s an international success story, which itself began to take shape more than 20 years ago on Sydney’s picture-postcard northern beaches.

The entrepreneur behind these prized surfboards, crafted exactingly to each customer’s needs, is Hayden Cox. His love of surfing began at the age of four, and he learned the art of shaping boards while working in Sydney at age 15. From there, he dedicated his life to creating premium surfboards, even while doing school assignments. His boards now sell from about $675 to nearly $4,000 for the top-of-the-line models. The company now has an office in Los Angeles, from which it handles the northern hemisphere. Perhaps surprisingly, one of Haydenshapes’ hottest export markets currently is Israel.

Famous customers include Rob Trujillo of Metallica, Mike D of the Beastie Boys, and actor brothers Chris and Liam Hemsworth. Even Miley Cyrus has ordered a board as an art piece for her Malibu home, so aesthetically beautiful and unique are Cox’s creations.

“Surfboards are all about creating a good experience for surfers,” says Cox, “and you can’t fake that part.” To fulfill that promise, Cox created his proprietary FutureFlex technology that dispenses with the central wooden stringer of a conventional design and introduces a parabolic carbon rail concept, which delivers a very particular flex and feel in the ride. It also makes these boards take off much faster when catching a swell.

Haydenshapes’ Hypto Krypto model has been the company’s best seller for the past three years and has been named surfboard of the year twice in Australia and last year in the States. There’s no end of nuance to the shape, the curve of the rails, and the concave underside that all determine the board’s performance and maneuverability. The Hypto Krypto is also hailed for its versatility across variable wave conditions and its suitability for beginners through to highly experienced riders.

Going global has hurt many bespoke surfboard makers, as the challenge of maintaining the close relationship between maker and customer disintegrates with distance. While Cox’s staff works hard to counter that, Haydenshapes relies extensively on its website to allow potential buyers to design the board they want, using the HSStudio custom board-design digital program. “The detail in shape, the ways you are able to customize your order from dimensions to artwork, and the fin configuration—it’s the most advanced online custom board-ordering platform in the industry,” says Cox.

Cox’s adherence to quality control combined with his passion and expertise have led him to become one of the most admired surfboard makers in the world.—Bennett Ring

“If your board does not paddle well—if it’s not loose and fast—then you are on the wrong surfboard,” says Bill Hamilton. These legendary shapers are continually innovating tried-and-trending board designs.

• Bill Hamilton (Hawaii)
Hamilton invented a patented fabric that hugs the rails of his custom surfboards, adding 28 percent more strength and serving as a bumper in rocky, shallow terrain. He’s known for making big-wave guns and was involved with the early tow-in designs used by Laird Hamilton and Darrick Doerner. Built on Kauai, his custom longboards utilize polyester and epoxy and are crafted from koa and monkeypod woods sourced from Kauai’s forests. 808.639.3493

• Daniel Thomson (Australia/California)
A young mastermind at Firewire Surfboards, “Tomo” Thomson is considered a design prodigy while also being highly regarded as a top surfer. He is known for aggressive, high-performance boards, and his EVO board is designed for smooth transitions and in-the-pocket attack.

• Jason Stevenson (Australia)
Attend any professional surfing competition, and you’ll most likely spy Stevenson’s iconic Traktor logo underfoot of top athletes. As the founder, owner, and shaper at JS Industries, Stevenson innovates. His company won surfboard of the year in 2016 for the HYFI Blak Box II, and he’s consistently at the forefront of board design.

• Ashley Lloyd Thomson (California)
Shaping may be male-dominant, but Thomson, headquartered in Santa Cruz, is a female powerhouse among an elite gent’s club. As more women learn to surf, Cruz creates sleek and stylish longboards inspired by her Malibu upbringing. Her signature “Made with Love” inscriptions decorate boards that buck tradition, as she shapes with environmentally-friendly resin versus polyurethane.—Erin Lentz