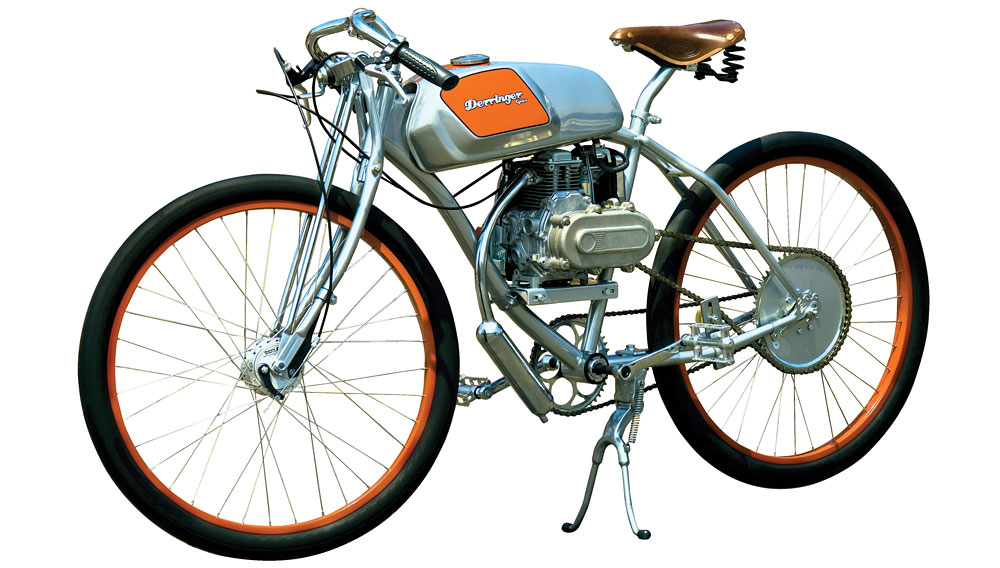 From around 1910 until the late 1920s, board track motorcycle racing was both a provocative and deadly endeavor that attracted fearless drivers with a penchant for speed as well as crowds eager to witness the spectacle. Competing on rickety wooden ovals built with steep banked turns, racers flirted with triple-digit speeds upon crudely developed bikes without brakes. Carnage was not uncommon during a race, which ultimately led to the sport’s demise in the early 1930s.

Today, many racing enthusiasts view those board track years as an important era in motorsports history. One fan of the sport, industrial designer Adrian Van Anz, aimed to revisit the past when he launched Derringer Cycles (www.derringercycles.com) in 2009 and began producing gas-powered bicycles with nostalgic styling. It wasn’t long before a couple of passionate investors saw the bikes, recognized their potential, and invested heavily in the company. “When we looked at the brand, we saw a very cool era of history that needed to be celebrated and remembered,” says Ian Sephton, who was one of those investors and now serves as the brand’s managing director.

Today, Sephton is one of three men running the company (Van Anz is now a shareholder), and together they’ve expanded upon Van Anz’s initial design, creating new spring-loaded chain tensioners, engine mounts, mufflers, and transmissions. Powered by either a two- or four-stroke engine, the street-legal bikes can reach a top speed of about 35 mph—a far cry from the original board track racers of the 1920s—though Sephton says drivers wouldn’t want to go any faster on these glorified bicycles (complete with working pedals).

The real appeal of a Derringer lies in the customization available—each bike is built to order. “Someone wants to put a mini jet engine on one of these, which isn’t street legal,” Sephton says of a current project, just one example of the many types of special requests that he and his team entertain on a regular basis. He adds that they’ll rarely turn down such a challenge. “If somebody is willing to pay for us to put on a turbine engine, we’ll figure it out and put a turbine engine on it.”

A gas-powered bike built to the company’s regular specifications with only cosmetic enhancements costs about $4,000, though Sephton has overseen the production of elaborately customized bikes with significant mechanical alterations. The most expensive project to date cost close to $10,000, but Sephton says that most elaborate requests typically fall in the $6,500-to-$7,500 range and require about two months to build. Later this year the company will begin taking orders for an electric version that can produce anywhere from 250 to 750 watts of energy, based on the customer’s local jurisdiction. “There’s been so much great technology that’s been developed,” Sephton says of the alternative energy industry. “We’re really excited about the possibility of a future electric bike.”

According to Sephton, an elaborately customized electric model would cost significantly less—between $2,500 and $4,500 less—than a highly bespoke gas-powered model, because there are fewer moving parts involved in the manufacturing process. That said, Sephton and his team approach each order with the same commitment, regardless of the model or power source. “We’re trying to build a product that can stand the test of time and that people can be proud of,” he says.