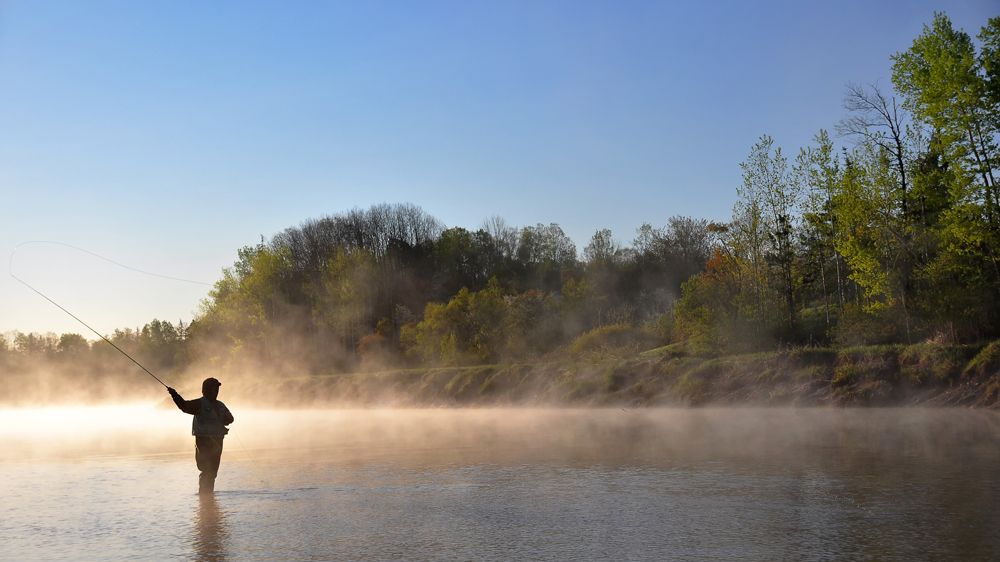 In summer, when I was a boy, I rowed our ancient Alumacraft to the bay down the shore from our cabin. Dusk was arriving, the water was still, and I cast to largemouth bass near the reeds. I brought a beloved tackle box with me, a net, and my license, which I bought each year at a shop, long defunct, called Bob’s Minnow Bucket (if the outfit had made hats, they would be cult objects in Japan). I returned to the cabin, wood walls warmly lit, and recounted these adventures to relatives I now realize were politely feigning interest. Catching a fish on my own in near silence was an electrifying thrill, and I felt the connection to the natural world that I still get today when I land a cutthroat trout in the Lamar Valley in Yellowstone National Park.

As a boy I owned one rod—it couldn’t have been more than six feet, but it felt enormous. My tackle box was meticulously arranged with a few Dare Devils, plastic purple worms, Mister Twisters (which for some reason were sweetly scented), and later something called the Banjo Minnow, which is the only thing I’ve ever ordered off television. This was before I began fly-fishing in my 20s. That elevated pursuit promised simplicity; the rod and reel are enduring forms that seem to resist technology. Though the materials change—bamboo evolves into boron, silk line into synthetic—the motion and principles convey a sense of timelessness.

Only the most disciplined anglers bow to simplicity. Others, as they gain ambition, subscribe to rarefied magazines (Eastern Fly Fishing, anyone?), read books (almost certainly too many), and, dangerously, begin to adopt theories. Where it once was sufficient to be a generalist, over the years they find themselves becoming specialists. More than that, they’re specialists with needs. The standard nine-foot, five-weight fly rod, the angling equivalent of a blue blazer, is no longer enough. Now there is need for lighter and heavier rods with distinct purposes—the velvet evening jacket and the unlined linen coat, as it were.

When it comes to flies, anglers are overtaken with the mania that overwhelms teenage baseball-card collectors. There is the acquisition, but, just as crucially, the arrangement. These flies need to be stored in boxes with some sort of master plan that makes sense when you’re standing in 50-degree water up to your waist in a river. The orderly fly box is something of a holy grail, a Platonic state all anglers strive for. Flies that we’ve had luck with are close to our hearts but look and sound strange to outsiders—how dare you laugh at the Stimulator, the Crazy Charlie, or the Royal Trude after what we’ve been through together!

Obsession turns downright criminal in Kirk Wallace Johnson’s extraordinary new book, The Feather Thief. Collectors track down illegal flies, available on shadowy online markets, made from the feathers of endangered birds. A massive theft of bird skins from a British natural-history museum by a flytier shows just how irrational and extreme the desire can be. All this in the name of re-creating rare Victorian-era flies that will never touch water. Something valuable but never used sounds nutty until you think of the wine enthusiasts who wouldn’t dream of drinking their beloved bottles, or certain car devotees who just polish their prized possessions.

The world is full of water, sweet or salty, and the fish in these different waters require specific rods (or so we’re led to believe). Soon we find ourselves with a delicate rod for spring creeks in Idaho, a more robust rod for bonefish in Andros—but different than the rod for Atlantic salmon. My Manhattan apartment doesn’t have enough corners for me to prop rod tubes in—I keep many in my car, the trunk of which is essentially a fishing storage unit. One reason anglers relate to one another is that we don’t have to explain our growing collections. It’s a relief to meet somebody else as obsessed as yourself—someone who understands when you tell them that this past summer you traded your lumbering but beloved 2001 Saab (Blue Book value: dwindling) to a friend for a fishing rod (Orvis Helios 3 value: enduring).

These new rods, in sleeker materials, are welcome technological marvels. But what of the past and the bamboo obsessive? These are men who want to party like it’s 1899. But of course it’s not just men; one of the great bamboo rod-makers, Annette McLean of Winston Rod Company in Twin Bridges, Mont., has been an expert in the field for decades. A bamboo rod can take more than 30 hours to build by hand, and there are not many people who possess the skill to do so. That’s why beloved makers can command prices of thousands of dollars, and there’s an active market for antiques. I have a New York friend who sent his brother on the West Coast to an estate sale in Los Angeles to buy all the bamboo rods that belonged to a sporting gentleman who had ascended to that trout stream in the sky.

I pride myself on simple tactics in fishing in general (think hard, but not too hard) and simple equipment, too, for that matter (when I go bass fishing, I keep my poppers in an Altoids tin). But then I went bonefishing in the Bahamas and became addicted to that marvelous pursuit. Fishing in remote islands, you bring all your gear with you, and I found myself buying every conceivable fly I might need, late at night on the Internet, for a yet unconfirmed trip six months later. The fear of not having the right fly was simply too much to endure.

Reels also multiply around anglers. The classic Hardy reel, made in England with models like the Marquis and the Perfect, long set the standard for the sport when it was a gentleman’s pursuit. Now others have entered the deep end with modern ingenuity, like Tibor’s Billy Pate reel. Some want the best of yesterday, others the best of tomorrow.

One reason we want this equipment is the illusion that it will impose order on this most uncertain pursuit. We can’t control what the fish do, so we try to control what remains in our power. But can we overthink this? Hell yes. A crucial part of fishing is doubt. In fact, failure is the defining pattern of fishing; the action is the exception. That’s why the late great art critic Robert Hughes, himself an avid angler for striped bass in Montauk, called fishing “a ridiculous human passion.”

The key is thriving in its incongruity. That moment of animation, the connection to a living thing, gives angling its shape. I would say it gives it its symmetry, but it’s really an asymmetry since the catching is a relatively rare occurrence. I don’t fish on our cabin’s lake anymore; it’s not much of a fly-fishing lake, and I feel bittersweet toward the idea that I outgrew it on those terms. But this past June, I took out my father’s Lowell wooden rowboat (itself an object of some obsession). I brought a fly rod and nothing else. I rowed across the lake. The day was cool, and the bass hadn’t descended into deeper water. I saw shadows moving in the shallows and tied on a popper, which looks like half of a wine cork painted black (great debates rage, naturally, about what is the most effective color) and attached to thin, whiskery, plastic legs. A child’s idea of a water creature, yet a standard in the bass arsenal.

I cast toward the shore and pop-pop-popped it across the surface. Suddenly, it disappeared in a flash of water. It was inhaled by a bass, and I exhaled in surprise, raised the rod, and set the hook. A short while later, I landed a perfectly respectable largemouth bass. With this hardy fish you can reach right into his mouth, unhook the fly, and release him, and he swims quickly away. You don’t even need a net. It couldn’t have been simpler. I rowed back across the lake with nothing in the boat but a rod, a reel, and this angler. Beneath all the collections, the theories, the doubts, it’s still the classic equation.