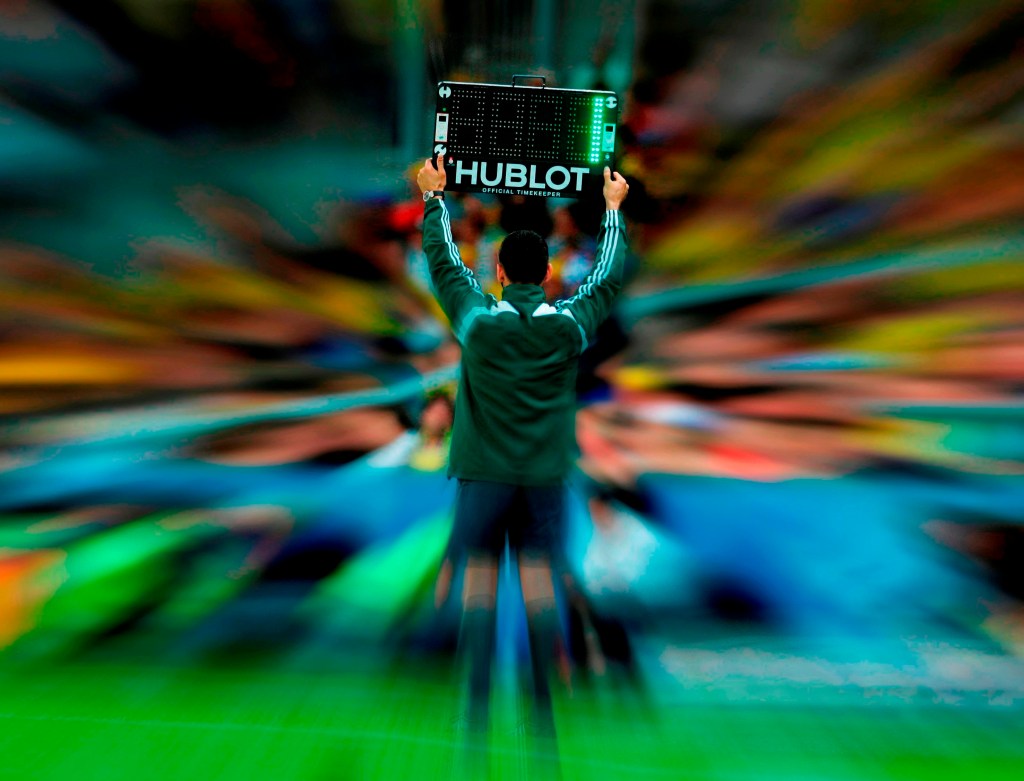 Last week of World Cup and already I have a bit of nostalgia. Here and gone so quickly with so many emotions and heart pounding excitement. The tough northern European countries have come back but they will have to deal with the determined elegance of Spain’s passing and the never quitting attitude of Uruguay (little over 3 million people …). Heart is always a key element to success.

In different countries Hublot is holding special finals events .In New York at Wall Street Cipriani we will have the Hublot Café’ and show the semifinals and finals and also our soccer watches from Maradona’s to M.U. Even if your country is not in this last week, you cannot deny wanting to watch the games. Who wants to miss the ‘deliziosi’ movements of Schneider and Robben or the incredible skills of the young Germans?

But especially who wants to miss the unifying moment of the Final, the Moment that maybe more than any other athletics event brings the World together? a Moment that makes us all bite our nails or tap our feet to then explode in that marvelous word which has become more like a mantra

I still love to hear it in different languages – same word but so many ways to say it, feel it, mean it and express it …… Sure there will always be a winner and loser next Sunday but just being part of the game means scoring in Life.

Soccer is really life on a green surface …. Another week of excitement, goals, controversies… Two things come to my mind about the World Cup so far.

The historical super powers of Europe have to develop new talent and character –Italy was eliminated mainly for lack of stars and France of spine. The South Americans have taken to the World Cup with passion and desire from its young players and the will and tenacity of its old guard. Even Japan and South Korea have shown deftness and skill. For Europe this a soccer challenge which in a way may be keen to a political one.

The second is about technology – we have to be careful to think through the need for instant replay, sensors and others. It may change the nature of the game. Just because sports such as baseball and American football have them it does not mean that it may be easily translated into soccer. And if we use in the World Cup how do we adapt in local championships?

It sounds great on paper but do we really want to wait 5 minutes for a review? And how will rowdy fans react if a decision is changed? I am not saying not to look at possible tech-interventions but I think FIFA is right to be cautious. Technology is the future but Soccer is timeless.

First week of World Cup and I could not be happier. My beloved Swiss team beat ‘Goliath’ Spain. I could almost hear from my distant farmhouse the honking of horns from the thousands of cars in cities and villages in all of Switzerland. Hublot is also sponsoring the Swiss team so I felt even more thrilled, if this is possible. Now perhaps people will take the Swiss seriously not only for our beautiful watches and mountains but also our futbol talent.

The rest the World Cup is also thrilling, even if some games were a bit slow and not many goals scored in the first matches. The Cup is such a wonderful fusion of humanity and passions with thousands of different expressions and colors.

As Head of Hublot I also love to see the Hublot ‘sign’ which indicates a substitution and how much overtime will be played. This partnership with FIFA is a great fit for us. The eyes of the entire world are focused glowingly on beautiful South Africa. It reminds me of a saying I heard a few days ago from a big soccer fan: ‘The Earth is round because God loves soccer’.