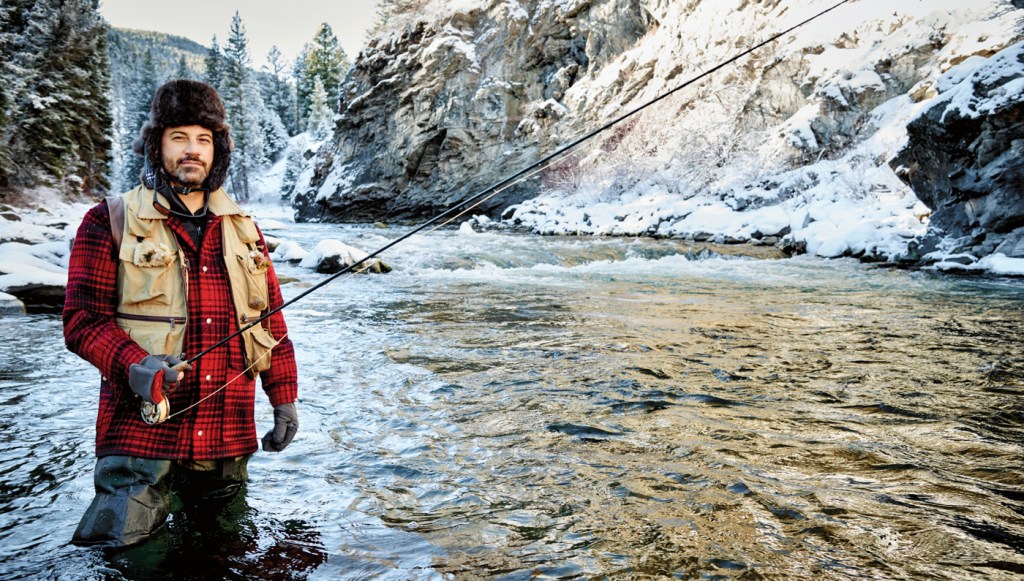 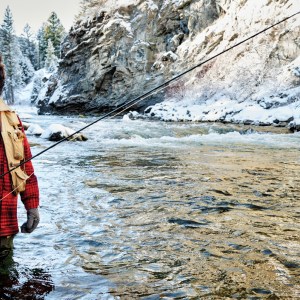 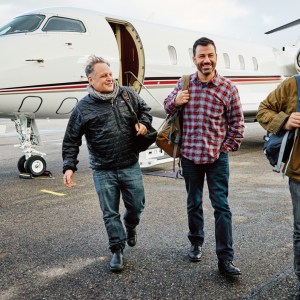 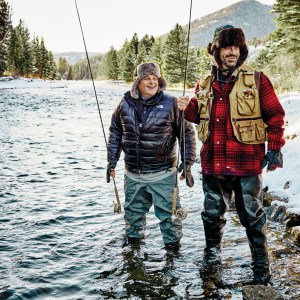 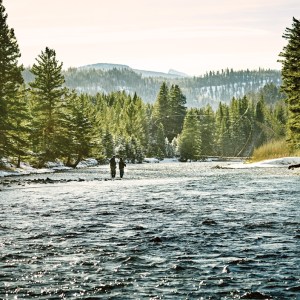 The large onyx stones covering the banks of the Gallatin River are coated with a few inches of fresh powder—remnants of a passing snow shower that blanketed Big Sky, Mont., and its immediate surroundings the night before. As the late-morning sun clears the tops of the conifers of Levinski Ridge, its rays bathe the adjacent embankment and steep cliff face rising up from the water’s edge in a warm glow—a warmth that belies the chill in the air and in the river’s flowing, shadow-cloaked waters. A gentle breeze blows snow from the pines that line the shore, filling the canyon with occasional swirls of drifting ice crystals. The landscape is a snow-globe scene come alive.

At the center of this frozen vista, Jimmy Kimmel wades up to his mid-thighs in the river, a fly rod in hand and a smile upon his face. He watches in amusement as his friend, the acclaimed chef Chris Bianco, stands waist deep in the near-freezing water farther downstream and struggles to break away the ice that has formed on the line at the end of his own rod. Upriver, their friend Adam Perry Lang, also a celebrated chef and the most experienced fisherman of the three, carefully maneuvers his way over slick, ice-covered rocks and casts his line toward a swirling pool near the Gallatin’s center. “No reasonable person would think to do this,” Kimmel said as he pulled on a pair of waders at the Yellowstone Club lodge about an hour before. “In fact, it wouldn’t even occur to me to fish for trout in the mountains with fresh snow on the ground.”

But Kimmel has come to Big Sky during the first week of December for precisely this purpose. When Robb Report approached the late-night TV host about fulfilling one of the experiences on his own personal bucket list, this river came readily to mind. The Gallatin, like all of Montana’s waterways, teems with wild fish, an irresistible lure for seasoned anglers. Indeed, the state’s rivers and their tributaries have not been stocked for some 60 years. According to Geoff Unger, the lead fly-fishing guide at the Yellowstone Club, the river’s frigid water, which remains cold even in the summer, promotes a robust population of rainbow, brown, and cutthroat trout. “That’s what makes Montana such a destination for fly-fishermen,” Unger says. “They want to catch wild fish.”

The Gallatin, however, has an additional draw for Kimmel: It is where Robert Redford shot many of the fishing scenes in the 1992 film adaptation of Norman MacLean’s novella A River Runs Through It. “Most people think fly-fishing is very complicated, and it’s not something that they want to try,” Kimmel says. “It’s not particularly complicated, and you can become proficient at it pretty quickly if you’re interested in it. When you do get an idea that you might want to go out in a river and put on this unusual costume and try out this rod and reel that is not the one that your grandpa taught you to use, you watch a movie called A River Runs Through It; and when you see it, you’re entranced. It’s a beautiful film. The fishing scenes are really something very special. I love the book, too, and just seeing the towns that are mentioned in that book on the local maps is exciting and fun. But to fish in the river where that movie was shot is a very special thing.”

By his own admission, Kimmel has lived a “buckety” life. For that reason, he struggles to think of many experiences that would populate his list. The few pursuits that occur to him include adventurous culinary journeys to Japan and Patagonia, though he acknowledges that fly-fishing would also play a pivotal role in those itineraries. According to his wife, Molly McNearney, Kimmel has developed an abiding obsession with this pastime. “Every time we’ve ever gone past any body of water, he’s like a dog with his nose out the window,” she says. “He looks at the water to see how it’s moving, and he’ll say, ‘I wonder if there’s any fish in there.’ He’s always looking at water that way. No matter where we are, he would rather be in a river. He always wishes that he was fishing. He’ll be there mentally sometimes, where we’ll be talking and his arm will just go up, and he’ll be doing the casting motion and he won’t even realize that he’s doing it.”

Kimmel caught the fly-fishing bug nine years ago, when the musician Huey Lewis invited him to his home on the Bitterroot River, nearly 300 miles northwest of Big Sky. Kimmel was almost immediately hooked, so to speak. “I wouldn’t use that exact phrase,” he laughs, “but I fell in love with it instantly. Ever since, it’s all I want to do when I go on vacation.” In fact, he now only fishes with a fly rod, preferring as he does the precision and finesse this method requires over the more passive practice of fishing with bait.

Despite his passion for the sport, the 48-year-old entertainer refrains for the most part from burdening listeners with his favorite fish stories. Other than sharing humorous recollections of an ill-fated childhood fishing trip led by his father, he tells few tales. “Fish stories are boring,” he exclaims. “Who wants to hear a fish story? If I were swallowed by one and had to light a lantern to get it to regurgitate me, that would be interesting. But who cares about me catching a fish?”

Yet catching a fish inspired Kimmel’s love of cooking more than two decades ago. He landed a king salmon on a bait-fishing trip off the coast of British Columbia in 1990—and then realized that he needed to cook it. After researching preparation methods, he basted the whole fish in butter, wrapped it in foil, and threw it on his grill. “It was simple but it came out great,” he recalls. “I was so pleased with myself, and that encouraged me to continue.”

Darkness finally forces Kimmel, Perry Lang, and Bianco from the frosty Gallatin, but its waters have been generous. The trio has caught almost a dozen trout, and they now turn their attention to the kitchen of their temporary residence at the Yellowstone Club, where they will prepare an elaborate meal consisting of rack of elk; sautéed wild mushrooms with toasted hazelnuts; a winter pasta dish accented by fresh bay leaves and a dried-heirloom-tomato pesto; and a salad consisting of Tahitian pomelo, ruby-red grapefruit, tangerine, Cara Cara orange, avocado, and a dressing of basil oil and lemon.

Kimmel’s culinary interests prompt him to routinely invite celebrity chefs onto his talk show, Jimmy Kimmel Live!, which is where he met Perry Lang in 2006. At about the same time, he visited Bianco’s Pizzeria Bianco in Phoenix and the two became fast friends. “One of the best things about hosting a talk show is that you get to meet a lot of people, and for me, right at the top of that list is meeting great chefs like Adam and Chris,” says Kimmel while he peels dozens of cloves of garlic. “I probably wouldn’t know them if I didn’t have the show. I’d probably just be a customer at their restaurants. But they are two of my best pals, and they’ve taught me a lot about cooking and eating.”

“You knew a lot about eating already,” quips Bianco.

“Well, yes,” Kimmel laughs, “that’s true.” Bianco feeds him a piece of pomelo, and after savoring the bite, the entertainer adds, “One thing that I’ve really learned from these two is an appreciation of ingredients—just to taste a piece of fruit that’s not adorned in any way and to stop and appreciate how good it is. Most people’s inclination is to do something to a piece of fruit or vegetable, but to recognize that it is best in its simplest form takes a lot of insight and learning.”

Kimmel’s hunger to learn more about food and his quest to grow as a cook make the kitchen a natural sanctuary for him. Still, even though he undertakes elaborate home meals—including a traditional Italian seafood feast for 50 people every Christmas Eve—he refuses to think of himself as a chef. “The word chef means ‘chief,’ so you need a staff that calls you chef,” he says. “If you’re chief of no one, you’re not a chief.”

When all the prep work is done and the elk is roasting in the oven, Kimmel falls into a comfortable seat and reflects on the day and the important role that fly-fishing plays in his life. “I live a highly electronic life, with e-mails and scripts to edit and questions to answer and videos to watch, so it’s nice to get out on the river,” he says. “Fly-fishing is meditative. You’re focused on this little fly or indicator, and everything else just washes by you, and the day goes by in a snap. I love rivers. I don’t know why. I grew up in Brooklyn and Las Vegas, so there’s no reason for me to. But I love the idea of them and being on them and floating and wading in them. When I’m fishing, I’m able to think about nothing but fishing, which is very rare for me. I always have a million things in my head.”

Sipping the glass of Cabernet Sauvignon he holds in his hand, Kimmel continues, “This is how I want to spend the last part of my life: Coming out to a river. Standing in the river. Listening to the river. Seeing the birds in the trees. And seeing these beautiful fish that present themselves to you. You have a little moment with them where you catch them, you see them, you say good-bye to them, and you send them on their way. To me, that’s fun. And to fish in this beautiful place in the snow with my pals Adam and Chris, that’s as good as it gets.”