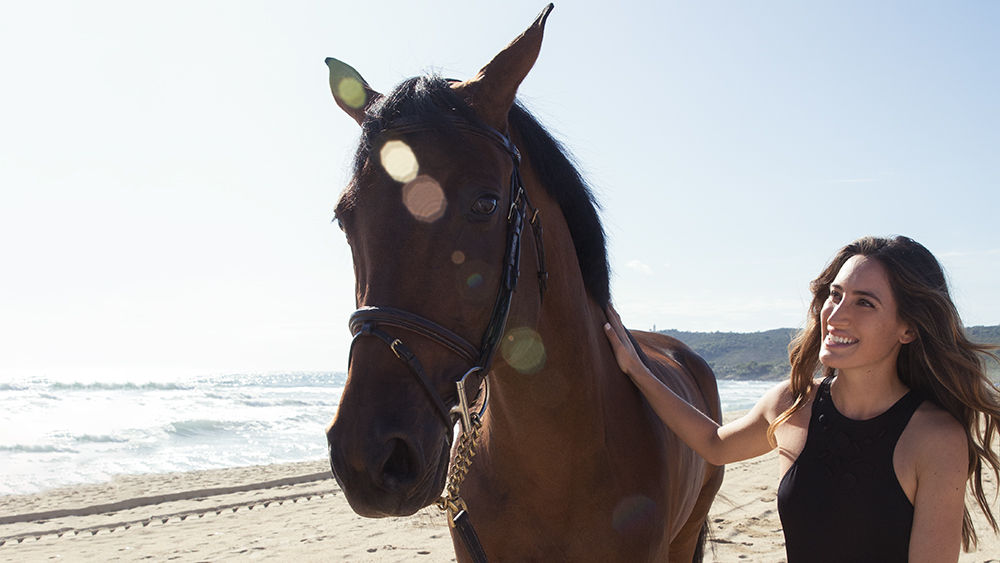 On a recent Wednesday, the 12-year-old mare was surrounded by the kind of conditions you couldn’t order if you tried: sun suspended in a cloudless sky, the Mediterranean’s waves lapping vast stretches of white sand, summer heat that should have left when all the tourists did. Beside her was a fence and, just beyond it, a lush courtyard at the hotel Epi 1959, a glamorous cocoon where beautiful French people kept replenishing barely touched dessert tarts with yet more dessert tarts—lemon meringue, ganache, blueberry. In this tableau vivant, lobsters were bobbing around an outdoor tank, Bill Withers was crooning about how he knew it was “gonna be a lovely day” and every fourth minute plumes of mist were materializing from the bamboo cabanas.

But Zecilie was all nerves. You could see it in her ears, which were twisting in and out like searchlights that couldn’t land their target. Or in the way she was nodding from side to side, her ridiculously shiny copper coat catching the light as she turned. “They’re so sensitive,” her rider, Jessica Springsteen, later explains. “And if you get nervous, it’s going to affect the horse.” Horses sense fear. Which is why the equestrian, who is warm and effusive, said nothing on that stretch of shore. Extending her open palm, she simply stood there.

For a moment, Zecilie calmed.

The two of them are on the French Riviera to compete. Half a block away, a parking lot has been transformed into a small white stadium for the Longines Global Champions Tour, where 55 men and women from 18 countries could win $680,000 in prize money over three days. In place of a typical sporting event’s hotdog or T-shirt stands, there are Hermès and Dolce & Gabbana booths.

The goal in equestrian jumping is to be the fastest to coax a 1,000-pound animal to torque its body over a series of obstacles in a thoughtfully considered course. “You need to be able to extend your horse, collect your horse, turn your horse all in a certain way so you’re meeting the jump correctly,” Springsteen says over tuna tartare and chilled passion-fruit soup. Some turns are tighter than others; some fences require different angling. It is an inordinately expensive sport that is based on geometry and strategy, but also on the most invaluable thing of all: time.

Springsteen should know: She has dedicated more than three-quarters of her 27 years to it.

Her earliest memories of horses are foggy ones that begin in California, where she was the second of three children born to rock icon Bruce Springsteen and his wife, the guitarist and E Street Band member Patti Scialfa. Jessica learned what she knows growing up in Rumson, N.J., where her family moved when she was four so she and her brothers could have a childhood removed from tabloid culture. Their house was across the street from her middle school. “I remember walking home over a hill to all of our dogs waiting for us on the other side,” she says. “It was amazing.” (Her parents now live in nearby Colts Neck, 10 miles from Freehold, the factory town Bruce grew up in. Jessica calls their 300-acre farm her “happy place” and puts her retired horses out to pasture there.)

The pair take a jump at the Longines Global Championship Tour event in Saint-Tropez.  Stefania Paparelli

Rumson was also near a top-notch riding school, and by five years old, Springsteen was saddling up to practice almost every day. To become an exceptional rider, you begin with the Ford and work your way up to the Ferrari. “Really talented horses teach you how to be a better rider, but you don’t start there because you’re not ready,” Springsteen says. There were ponies first, notoriously attitude-prone: They would scoop down for grass without warning and send her tumbling over. In her recollection, she would fall off pretty much all the time. “It’s good for you, I think, when you’re little.” At 12, she got her first horse, a brown mare named Deneuve, who was “brave as a lion” and taught her confidence.

Jumps were scary in the beginning, and Springsteen was overly cautious. “You’re meant to canter [over the fences], and I would only trot,” she says. “And because I would only trot them, I would never win.” There was this one rainy competition she remembers where the whole Springsteen clan had been patiently waiting for her turn to jump the low barriers. “It was pouring and they were like, ‘We’ve been here all day, you have to canter the horse.’ So I finally did it and got over the fear.” She now clears five-and-a-half-foot obstacles.

“Her way with horses is exceptional,” Helena Stormanns, the trainer and veteran championship rider who scouted Zecilie at a show in Germany three years ago, tells me. “Jessica’s got a very generous personality, and horses like that… Horses don’t respond well to fear.” Still, inside the lovely twentysomething who has Taylor Swift’s new Lover album on repeat is a fierce competitor. “You go through pain and emotion and anxiety as a rider, and you have to get to the other side of that,” Stormanns says. “Jessica is determined. She wants to win.”

A year ago Springsteen relocated to Brussels. After basing herself in England, the Netherlands and Germany for three summers, Springsteen found a city without a language barrier (she knows conversational French) that also proved a central location for competitions. She and boyfriend Lorenzo de Luca, also a show jumper who enters many of the same competitions, live five minutes from the stables and spend winters together in the equestrian enclave of Wellington, Fla.— “the one time of the year when you’re in one place for longer than two weeks,” as she puts it.

In this shot, Jessica is about five or six. She started on ponies and got her first horse at 12.  Springsteen family archives

The couple typically compete Thursday through Sunday and then ride Monday through Wednesday, with most mornings beginning at nine o’clock. Springsteen often takes an hour-and-a-half train ride to Germany, where Stormanns is based, for time with Zecilie, who spends up to four hours a day being exercised through the surrounding forests. “I’ll be on the phone with my mom and I’m like, ‘Hold on, I’m crossing the border, I’m going to lose you,’ ” Springsteen says with a laugh. “We’re in three countries in one day. She’s always so surprised.”

They are traveling the world together, Springsteen and Zecilie, and theirs is a complicated waltz of a lifestyle, requiring precision and months of planning. Before Saint-Tropez, they were in Rome, where Springsteen was able to bolt over to the Colosseum on a long run with a friend between rounds. Before that: Paris, Cannes, Shanghai and Madrid. Within Europe, the horse, who is worth around $10 million, almost always travels on a truck specially outfitted with a partition for support. When Springsteen competed in New York this fall, Zecilie boarded a plane with stalls instead of seats—a journey that wasn’t too taxing because of the horse’s ability to sleep standing up. The round-trip ticket cost upwards of $20,000.

Much like the concert touring circuit, Springsteen’s nontraditional path will likely find her living out of a suitcase for the foreseeable future, given that riders can and do compete into their 60s. Her parents, she says, “always really supported me. They understand the lifestyle and how it can be taxing.” When she feels the need to come home, even if only for three days, they get her there. “As you get older, you realize. You assume everyone has that support, and you see how lucky you are to really have [it].” She chalks it up to parental love, of course, but also to empathy for her dreams and ambitions. “They obviously found their passion when they were younger with music, and they recognize how hard it is. Some people go through their entire life without finding something that they really love, so they just kind of really pushed me. They know that you just have to keep going. And they’ve really instilled that in me.”

On occasion, touring paths will cross. Three years ago Bruce and Patti had a show in Madrid the same weekend their daughter was in town for a global-tour event. “Everyone from the horse show went [to the concert], and it was the best of overlapping,” she recalls. “So much fun.”

The difference between the two pursuits is time off. Which is to say, there is next to none for Springsteen. There can’t be when you’re working with a live animal. “You have to manage your schedule and do what’s best for [the horse],” she says. And there are eight that require her attention.

It is ultimately that attention, that focus, on which success hinges. “You have to dig deep, the horse has to dig deep, and together you grow into a partnership,” Stormanns tells me.

It took Springsteen and Zecilie nine months to find their rhythm. “She couldn’t understand what I was asking her to do, and I was a little confused by certain movements,” Springsteen says. Studying developmental psychology at Duke isn’t something she cites as having influenced her process, but horses are not unlike children. “You’re never going to change them in a day, and they’re never going to understand everything you’re asking. You have to do it gradually and be patient.”

Whether Zecilie is the one that will carry Springsteen all the way to the Olympics, time will tell. (Unlike many sports, equestrian does not have a single Olympic-trial event. Instead, riders are chosen based on their cumulative performance at competitions throughout the season.) Zecilie is squarely within a horse’s peak years—typically between ages 11 and 15—and has the physique. But as Springsteen points out, “You can buy the best horse in the world and pair it with the best rider and still have a bad result.”

The next day, they enter the ring. Gone from Springsteen’s face is her Julia Roberts smile, and her long, flowing brown hair is secured beneath a helmet. Her torn denim and the Chanel sleeveless tee she’d nicked from her mom’s closet (“she has the best taste”) have been swapped for a navy blazer, white breeches and the most dialed-in focus. Watching her and Zecilie snake through the 13 jumps feels like a lesson in presence, a hyperextended version of the way Springsteen had energetically become the anchor between sea and horse the day before.

It lasts 77.35 seconds, this first round. It is so quick. It is so quiet. And their first-place finish two days from now will be the biggest win of their career. Perhaps Zecilie was feeling Saint-Tropez after all.