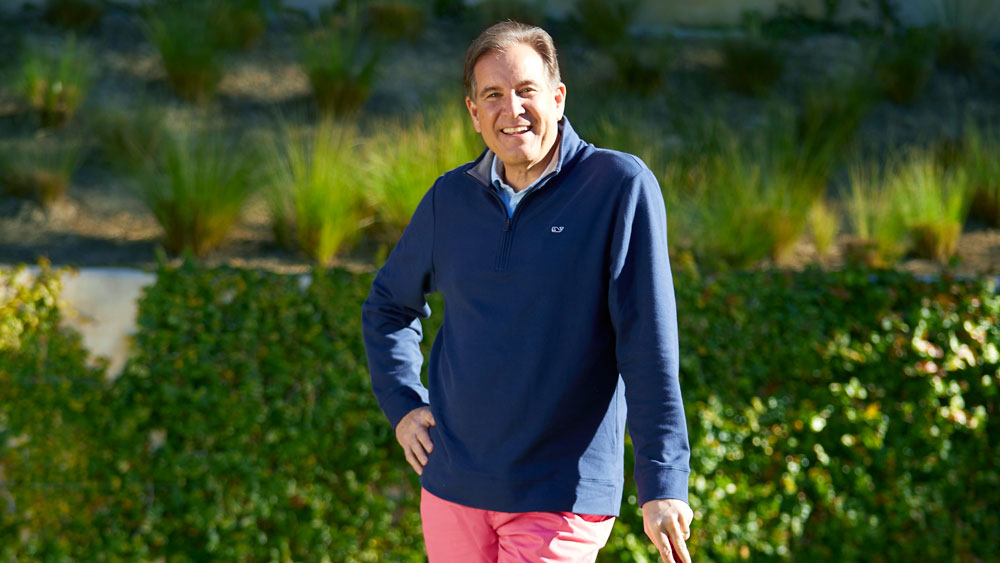 When the flowering peach and magnolia trees bloom in eastern Georgia, the best golfers in the world converge on the city of Augusta for the Masters (April 5 to 8), one of golfing’s four annual major tournaments. We recently had the opportunity to speak with Jim Nantz—who has broadcasted the event for more than 30 years—following his press conference at the recent PGA Merchandise Show in which he announced a new partnership with Ian Murray of Vineyard Vines to produce a collection of golf apparel set to debut in early 2019.

During the intimate press conference, Nantz touched on his lifelong experiences in the golf industry, beginning with his job as a young boy working for a PGA professional, as well as his more recent work broadcasting for CBS and lending his voice to Titleist’s television commercials. Yet, the 58-year-old emphasized the significance of his upcoming fashion endeavor. “This is something that I always wanted to do,” he said. “Golf is a central part of my life, and I look forward to working with the great folks at Vineyard Vines to create an authentic golf apparel brand that speaks to the golfer.”

Following the event, we sat down with the esteemed broadcaster to talk about a variety of subjects, including his passion for golf, the allure of the Masters, and why he would never live anywhere other than Pebble Beach.

Looking back over your 33 years broadcasting the Masters, what are your favorite moments?

For me, nothing can top 1992. To see my college teammate and suite mate, Fred Couples, accomplish his dream and to be there to present the green jacket in Butler Cabin . . . it goes beyond words.

How difficult was that 1992 Butler Cabin ceremony for you as a broadcaster?

When we roomed at the University of Houston, we both had very clear goals. Fred wanted to win the Masters; I wanted to broadcast it. We used to sit around and talk about it. Then all those years later, it actually played out for real. Man, it was emotional. So it was difficult and wonderful at the same time.

Do you have any other favorite moments from your years broadcasting The Masters?

Three other tournaments really stand out. For starters, Jack Nicklaus winning his historic sixth green jacket in 1986. I was there working my first Masters broadcast at the age of 26. It was such an honor to try and lend words to frame Jack’s final major championship. Of course, Tiger winning in 1997 is on the list. There was so much historical and social significance to his victory. It wasn’t compelling in terms of a tight competition because he lapped the field and won by a dozen shots, but it was riveting watching something so extraordinary. I called it “a win for the ages,” and providing the narrative to that event ranks as one of the thrills of my career. And then Mickelson in 2004, winning that first major championship that had eluded him for years. It was special to call the breakthrough win for Phil as he will be remembered for being one of the premier players of his generation and even throughout the history of the game.

What has you most excited about the Masters this year?

You have a talented young brigade that’s ready to make the tournament their own. Plus, Tiger has made an amazing return to competition in the weeks leading up to it. The scripts that the Masters produces have been fantastic every year, and I can’t wait to see what’s about to be written.

What is it about the Masters that made broadcasting it a childhood dream for you?

There was something about watching the Masters tournament that inspired me. The beauty, the drama, the way the announcers told the story—I was completely enraptured. I knew before my high school years that there was nothing I wanted more than to be one of those voices at Augusta.

Your passion for golf is evident. Is that why Pebble Beach is home?

I first saw Pebble Beach when I was 10 years old, living with my parents in Moraga, California, about a 3-hour drive away. In my parents’ minds, the more they could introduce their kids—myself and my sister, Nancy—to cultural, interesting experiences the better. For them it was always about teaching moments. My father wanted to make sure we all understood that in his mind Pebble Beach was a paradise worth sharing with his young family. We rode around 17 Mile Drive, saw the golf course from a distance, window shopped in neighboring Carmel-by-the-Sea, and took in all the sights and sounds. Years later, when I was hired by CBS, I got an assignment to go to Pebble Beach to broadcast the 1986 tournament, and my time there reaffirmed those early childhood memories that it was a special place. I said then that someday I wanted to live there.

It captures you in a lot of tranquil ways, the landscape, the quality of the golfing experience, the restaurants. There’s no hustle and bustle out there; it’s peaceful, and it works in perfect harmony with the fast-paced world that comes with my broadcasting job. I’ve been fortunate that my job has taken me to all corners of the globe, and I’ve never seen a place that matches the beauty of Pebble Beach. I don’t wake up a day without counting my blessings to be able to call it home.

Do you have a favorite memory from a round of golf that you’ve played at Pebble Beach?

How often do you play the course?

I play Pebble Beach Golf Links about five times a year. But I walk the course about 10 times that number. Nothing I enjoy more than an early evening stroll out to the 7th tee to pause and appreciate our many blessings.

You actually built a replica of the 7th hole in your backyard. What can you tell us about it?

My wife Courtney and I got married on Pebble Beach’s 7th hole, and from our house we have an unobstructed view of our wedding chapel. So having a replica in our backyard has special meaning. It took about a half year to build it. The shot from the tee is actually about half the distance, and the vertical slope from the tee to the putting surface is half the drop. We got topography maps from Pebble Beach’s terrific golf superintendent, Chris Dalhamer, which allowed us to make sure the putting surface and surrounding bunkers were identically shaped, yet miniature versions of the real hole. The greens break the same.

How often are you out there hitting balls?

I hit balls all the time. When we have parties at the house, our guests love to give it their best shot. It’s bad form to name-drop, but we’ve had some legendary golfers play the hole, beginning with names like Palmer and Nicklaus.

Speaking of Arnold Palmer, you had the good fortune to play golf with him several times. What were those experiences like?

You could see that even in his later years, he loved to play and loved to just be out with his friends and buddies. He loved playing the game, even though he couldn’t hit it as far as he used to or didn’t make as many putts as he once did. He was hopelessly in love with the game of golf.

Other than golf, do you have any hobbies or passions?

I’m starting a collection of paintings by Samuel Finley Brown Morse, the founder of Pebble Beach. He built the golf courses inside Pebble Beach, the Lodge, the 17 Mile Drive—he was ahead of his time. He also painted as a hobby before passing away in 1969. I’ve bought a few of his pieces and am always looking to add more. We Nantzes are all-in on all things Pebble Beach. We got married here, we live here full time, we are going to raise our children here. It’s only fitting that we adorn some of our walls with the man who took a gift from Mother Nature and turned it into the greatest resort property in the world.

Let’s switch gears and talk about your Vineyard Vines partnership and golf apparel. What can you tell us about the project?

It’s important that when you enter the world of golf apparel that you do so with a brand that is authentic to the sport. One that speaks to the golfer. There are hundreds of clothing manufacturers that produce polo shirts. That doesn’t mean they are in the golf business. Back in its heyday, I served on the Ashworth board for 8 years. It was the biggest golf lifestyle brand in the country. It was a serious role; it wasn’t just in name only. I never missed a board meeting, and it was an invaluable experience that has given me a solid foundation to take on this exciting enterprise. There are some great brands out there these days. We are going to create one, as well. Living at Pebble and calling many of the biggest tournaments in the game, I know what a golf “lifestyle” looks like. I see it every day. We will give golfers an experience that makes them feel special. And stylish.

Can you describe the new collection’s aesthetic?

For now I will just say that we are going to create a line that is fun yet classical, anchored to the past but playing to the future. You will enjoy wearing the JN Collection by Vineyard Vines when you come tee it up at Pebble Beach. And you will be just as comfortable wearing the clothes when you come to the famed Tap Room after the round. I will see you there.