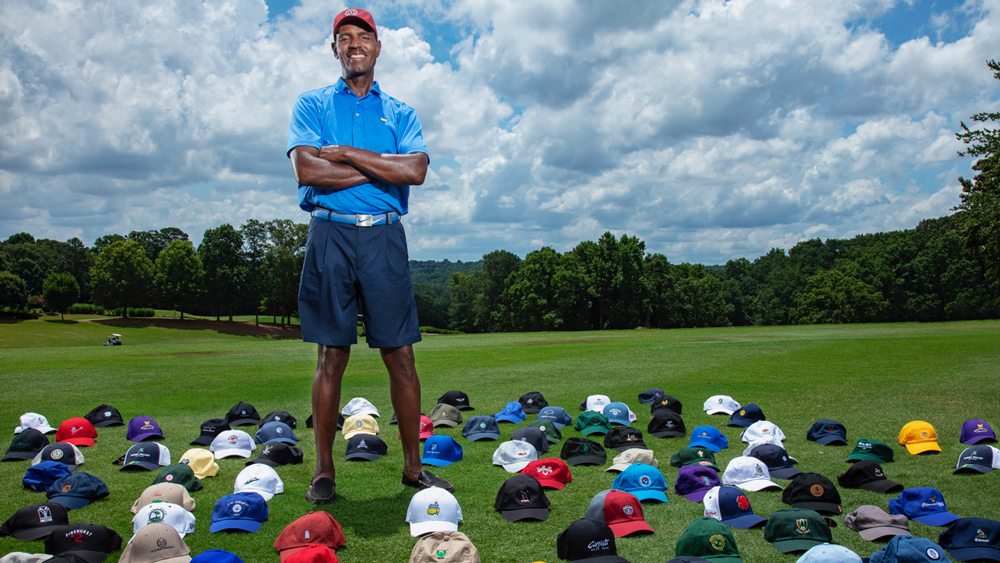 Not every adventure has to be the kind that risks life and limb. Some exploits are more nuanced than hoisting yourself atop Everest or barreling down white water on the Zambezi. They aren’t driven by strength or a disregard for one’s life; they are adventures of tenacity and fortitude, the kinds of quests that start out simply as ideas but ultimately drive some of us to do incredible things, like motorcycle solo across the contiguous states or visit every country in the world or, in this case, play 100 golf courses in a single year.

But it wasn’t just any 100 golf courses. It was “the century.” That is, the list of America’s 100 greatest courses, determined by a legion of experts who make it their business—no, their life’s work—to rate, and re-rate, and then re-rate again the best of the best (sounds familiar). Sure, there were golfers who had ticked off nearly all of them, but the always-evolving list—which is released by Golf Digest magazine every other year with updated rankings—is a moving target. The golfer who could play them all before the list turned over would no doubt be a legend on the green for life.

Who could pull off such a stunt? Clearly, someone unburdened by the daily demands of a job. You might imagine some mid-amateur silver fox with a private jet and a fat Rolodex, but you’d be wrong. The golfer of the year (or rather, the century) is as unlikely as the idea itself. Jimmie James was raised the fourth of eight children by a single mother. Their house in Huntsville, Texas, had no plumbing or electricity. Signs forbade him to drink from certain fountains. But he ultimately climbed his way up every rung at ExxonMobil, until, last year, at the still-got-it age of 58, he found himself retired—and wondering what to do next. “It was a very high-stress job with a lot of global travel,” he says of his 33-year career. “When I retired and went from 100 miles per hour to 30, I wanted a project to keep me engaged, because I’d seen others struggle with this transition.”

The athletically built James, who took up golf at 45, thought he might pass his first year of retirement playing two golf courses in every state. But then a grander notion occurred to him: If he was going to play 100 courses in the United States, why not play the best?

“Since the Golf Digest rankings update every two years, it occurred to me that perhaps no one had ever played the entire list while it was current,” says James (correctly), who at the time of his idea’s inception had bagged only four: No. 16 the Country Club, No. 22 Whistling Straits, No. 75 Congressional, and No. 21 the Ocean Course at Kiawah Island—the latter multiple times, because he has a residence there. For good measure, he’d play those again. “It was important to me that I play each course within the 12-month time frame.”

In golf, unlike most other sports, the major obstacles aren’t extremity; they’re exclusivity. Personal connections and the rub of the great green in the sky are paramount no matter who you are. That’s why James knew his first course had to be the one that was most notoriously di cult to get on: Georgia’s No. 2 Augusta National. “As I pursued my quest, I anticipated that a lot of people would ask if or how I was going to get on Augusta,” says James. “Playing there first gave me credibility. People knew I was serious.”

The connection that started it all wasn’t made by James himself, but rather by his wife. The dean of the Goizueta School of Business at Emory University, Erika James is an overachiever like her husband. She made an open plea to her board that if anyone would invite her husband to play golf, she’d sure appreciate it. Not long after, James officially began his crusade aboard the private jet of a golfer who had the coveted Augusta connection.

“Augusta wasn’t my favorite golf course, but it was my greatest overall golf experience,” says James. “From the drive up Magnolia Lane, to warming up on the Par-3 Course, to the pimento-cheese sandwich for lunch, to the gallery of staff coming out to watch our opening tee shots on the championship course, I never wanted the day to end.” Having 1992 U.S. mid-amateur champ and Augusta National member Danny Yates in his foursome didn’t hurt either: After the round, Yates offered to help James with entrée to other courses. He declined.

“Once you get introduced into a certain circle, you could really leverage someone for their contacts, but I didn’t want to lean on any one person to help with more than a handful of courses,” says James. “The fun was going to be meeting people as I went and letting this network of people develop naturally.” As such, he rarely planned his itinerary further out than a month. Though, at this point, we must insert one small asterisk: James played Augusta National in May 2017 during his last month of work. It wasn’t until he was settled into retirement on June 12 that his mission officially began, he says, and he completed the list on June 11, 2018, so he gave himself a year to play 99 courses—not 100. Still, the judges will allow it.

Though James is a successful guy, he faced another obstacle: the question of how. After all, he and his wife have two sons who want to go to college one day. So he cashed out his modern road warrior’s chest of hotel, airline, and car-rental rewards points, paying for nearly half of the travel for “Jimmie’s Top 100 Golf Course Tour,” as his blog dubbed the adventure, without ever opening his wallet. And armed with the sort of airline status so lofty it’s unpublished, he could make last-minute flight changes without getting penalized—like when his No. 5 Oakmont invitation suddenly materialized while he was on his way out to No. 73 Cherry Hills.

The occasional manic travel moment aside, James’s year unfurled beneath prime season sunshine at a pace befitting the game. He loved hanging around putting greens, starting conversations, and seeing where they led. “Whenever I told anyone what I was doing, the re ex response was to wonder how they could help,” he says. “Forty years ago, there’s no way I could’ve played all these courses. There were people who warned, last year, that there would be some courses I couldn’t get on, but I felt totally welcomed and respected everywhere I went.”

Such a year was filled with superlatives. The hardest course was No. 40 Pikewood National; the fastest greens, No. 12 Crystal Downs; the tightest lies, Augusta National. The most expensive green fee was $750 at No. 63 Canyata in Illinois, although James did have the place to himself, with a lone pyramid of range balls welcoming him on arrival. (The private club averages 350 rounds per year.) The strictest cell-phone policy belonged to No. 14 Chicago Golf Club, where use of any kind is permitted only inside a car. The hardest course to get on turned out to be No. 71 Milwaukee Country Club. James worked his contacts for months to nail down a host, and even then, had to tee o on the 10th hole per club policy.

James’s most indelible memory might be the sudden silencing of silverware on the patio that occurs when you address your opening tee shot at No. 6 Merion. And though he encountered an outpouring of hospitality almost everywhere he went, the vibe at No. 56 Old Sandwich sticks in his mind: “I stayed for three hours after my round. They wouldn’t let me leave!”

When James ran global fuel-supply lines for ExxonMobil, the master logistician never left anything to chance. But toward the end of his great mission, with 35 days and 29 courses—many of them in the New York area—left to go, he had to get lucky. Leaving No. 4 Shinnecock Hills unpegged the spring before it was hosting the U.S. Open was poor planning, but a solid favor from investment banker Jimmy Dunne, who rushed home early from his college reunion, got James on the Long Island course on the final day guests could play before the tournament. There was another near-miss at Winged Foot’s No. 10 West Course: The front nine was being renovated, but James improvised and played a composite 19 holes with the adjacent East Course (No. 62 on the list).

But it was across the street from Winged Foot, at No. 76 Quaker Ridge, where James got really lucky. After his two-for-one round at the former, as he drove past the latter on Griffen Avenue, something like fate intervened. A golfer at the eighth hole struck a massive slice that flew into the windshield of a passing pickup just ahead of James. Head pro Mario Guerra was summoned to mediate, but despite assurances that the club would cover the cost of a new windshield, the driver was reluctant to move his truck until police arrived. With traffic backing up, Guerra feared another accident.

“Then, walking up the shoulder of the road, I see this tall guy with a big smile,” says Guerra. “He comes right up to us and starts in, ‘Gentlemen, I’m sorry for this damage that has occurred today, but with every unfortunate situation there is a silver lining. Do you believe in destiny? You see, I was born poor in Texas and am now on a quest to play all of our nation’s greatest courses and . . .’ He goes on, and the golfer, the pickup owner, and I are all stunned by this guy. I was impressed with how he handled himself. I gave him my contact details to ping me that night, and I played with him a few days later.”

During the home stretch, James began to recognize a rising tension within himself. Was the urge to complete the mission overwhelming his ability to savor his spirit of adventure? To get back on track, he returned to what he’d been doing all along: making small talk with as many employees at each club as he could. His go-to opening line: “What’s the one piece of advice you would give me for playing this course?” These interactions supplied the texture to make days memorable within the blur.

While James was making chitchat with locker-room attendants, his wife kept things together at home and survived their teenage son learning to drive. “He traveled so much when he was working that it didn’t feel that different, except the cadence of the golf trips was more random,” Erika says. Despite her husband grabbing a trip to Ireland and an additional 70 rounds along the way, he did make it back for a lot of important dad activities. For his 99th course, the couple walked together in their backyard at Kiawah, and his last course, No. 25 Wade Hampton in North Carolina, was only a short drive away.

And then there was the inevitable improvement of James’s handicap. When he started his mission, it was a respectable 12, and at one point, it dropped as low as 8.5. But toward the end, his body broke down and he regressed to 9.4. Still, James says, it was an epic way to spend a year.