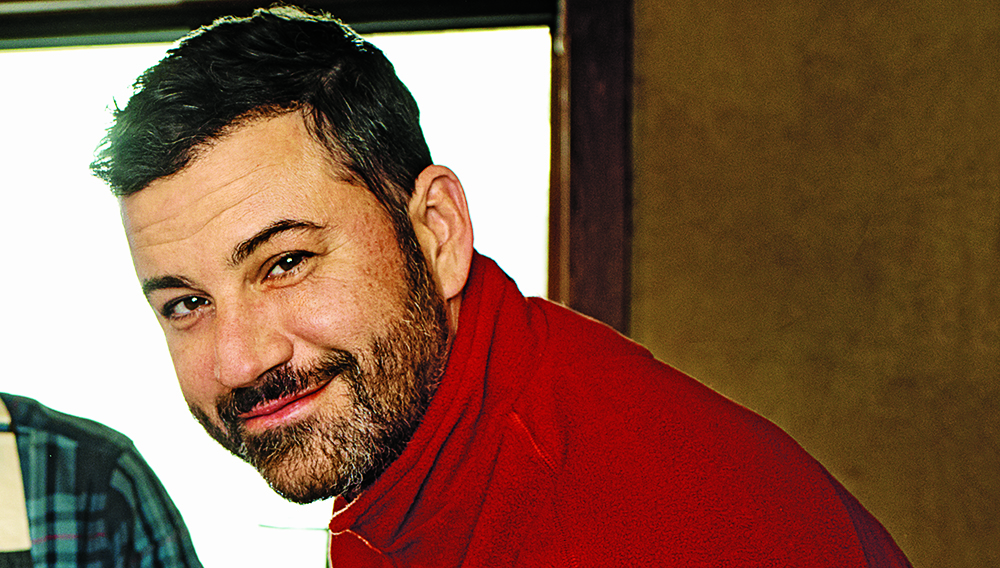 RobbReport.com: Given that you just spent about seven hours wading in freezing cold water with a fly rod in your hand, it seems safe to say that you are passionate about fly-fishing. What piqued your interest in it?

Jimmy Kimmel: Nine years ago, Huey Lewis invited me to come to his house on the Bitterroot River in Montana and hang out and fish. I fell in love with it instantly. Ever since, it’s all that I want to do when I go on vacation.

RR.com: Was it difficult learning the casting techniques?

JK: Most people think fly-fishing is very complicated and it’s not something that they want to try; it’s not particularly complicated and you can become proficient at it pretty quickly if you’re interested in it.

RR.com: What made fishing in the Gallatin River today a bucket-list experience for you?

JK: When you do get an idea that you might want to go out in a river and put on this unusual costume and try out this rod and reel that is not the one that your grandpa taught you to use, you watch a movie called A River Runs Through It; and when you see it, you’re entranced. It’s a beautiful film. To fish in the river where that movie was shot is a very special thing. Now, I don’t cast like Brad Pitt did in that movie; I don’t know that anybody casts like that. I still wonder if he was casting, and if he was, he’s more superman than man.

RR.com: What do you love most about fly-fishing?

JK: When I’m fishing I’m able to think about nothing but fishing, which is very rare for me. I always have a million things in my head. I live a highly electronic life with e-mails and scripts to edit and questions to answer and videos to watch, so it’s nice to get out on the river. Fly-fishing is meditative. You’re focused on this little fly or indicator, and everything else just washes by you and the day goes by in a snap.

RR.com: Do you have any good fish stories?

JK: Fish stories are boring. Who wants to hear a fish story? If I were swallowed by one and had to light a lantern to get it to regurgitate me, that would be interesting. But who cares about me catching a fish?

RR.com: Tell us about your relationship with Adam Perry Lang and Chris Bianco. How did you meet?

JK: One of the best things about hosting a talk show is that you get to meet a lot of people and, for me, right at the top of that list is meeting great chefs like Adam and Chris. They’re so creative, and on top of that, they’ve both become really good friends. Our relationship goes far beyond the kitchen—that’s just one small part of what we do together—but it’s by far the most delicious part.

RR.com: You are a passionate home cook, yourself. What have you learned from your time spent cooking with Adam and Chris?

JK: One thing that I’ve really learned from them is an appreciation of ingredients. Everybody talks about the tomato sauce that they make, but they never talk about the tomatoes. I’m very passionate about tomatoes. When you make a recipe for a marinara sauce, which is very simple—it’s basically olive oil and garlic and tomatoes, and then maybe you put in some basil or carrots and onions—people say get tomatoes. But there are so many terrible tomatoes, and then there are great tomatoes.  But how many people do you know that have opened six different cans of tomatoes and tasted each one to know which one is the best? The biggest leap you can make as a cook is being discriminating when it comes to ingredients. Your cooking is automatically going to be better, but you have to have the wherewithal to seek out those ingredients.

RR.com: What is your greatest strength in the kitchen?

JK: My strength is improvising. If my neighbors come over at 11:30 and say that they’re hungry, I can find something to make for them. I’ll never usually remember what I made, and it’s something that will almost never be repeated. But that’s my strength; I’m relatively creative.

RR.com: Fly-fishing and cooking are clearly two of your passions. Do you have any others, like golf?

JK: It’s funny because I consider golf to be an enormous waste of a life, yet I’m catching fish, which theoretically is a good skill to have, but I’m not even eating them. I’m releasing them. I understand that it’s ridiculous that I would compare those two and would say golf is a waste of time and fishing isn’t, because ultimately they probably both are. But maybe they aren’t because they add quality to our lives, and that’s probably the most important thing.