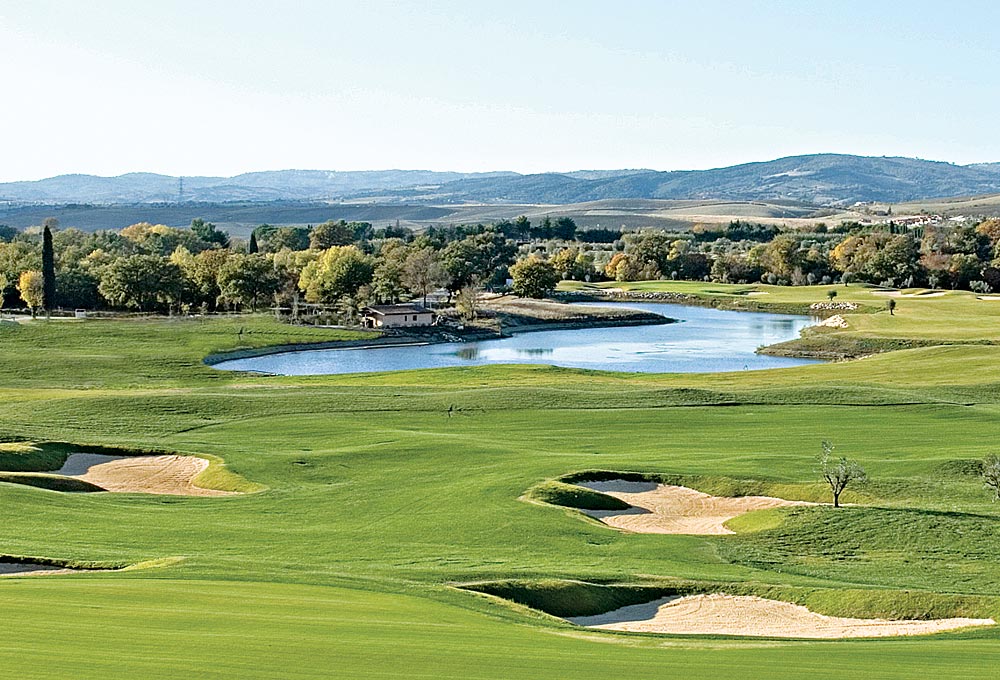 My golf ball sits deep in the gully, and as I consider my next shot, I hear only water trickling in the creek at my feet and the faint cries of kestrels, which soar in the sky above me as they look for lizards in the hills that ring the valley.

Ahead lies the 14th green at the Terme di Saturnia Spa & Golf Resort in Tuscany. Olive trees line two sides of the green, and the gully guards the approach. The green had seemed reachable, but now it looms several feet above my head. Salvaging the hole would require hitting an explosive chip shot, which, given my shot-making history, would have little chance of stopping on the putting surface.

The setting presents another risk, one more serious than suffering the indignity of another double bogey. Wild boars use this network of gullies, which crisscross the course like Scottish burns, to travel between feeding grounds, where the bounty is plentiful enough to produce 700-pound specimens with 4-inch-long tusks. I listen hard for the beat of approaching hooves, but I hear only the creek, the birds, and now the bells of the 13th-century church in the village of Saturnia, located high on the valley rim.

In truth, I have a better chance of holing out than I do of being gored by a boar while playing this Ronald Fream–designed course in Tuscany’s Maremma region. But if a golfer were to be felled by a boar, few places are better suited for a pleasurable convalescence than Saturnia.

legend has it that the god Saturn, in exasperation, hurled a thunderbolt at squabbling villagers and opened the spring that continues to pour forth at more than 200 gallons per second from nearby Mount Amiata to Saturnia. The sulfur- and mineral-rich water is heated naturally to a temperature of 98.6 degrees Fahrenheit. For millennia, the spring has been a popular destination for Romans and other Italians. Today, about 85 percent of Terme di Saturnia’s clientele is Italian, but in April, with the opening of its Fream course, the 52-?year-old resort made a play for American travelers who are more inclined to pack golf clubs than spa wear.

Golfers of any nationality would do well to leave room in those bags for some perspective, as I learn on the 14th hole. When my playing partners appear from the green above, their faces—like the Etruscan masks hanging in the Museo Archeologico in the nearby town of Grosseto—betray a subtle bemusement. If this were a burn at St. Andrews, my partners would be in the bunker with me, bestowing deadly serious advice. Here, all I receive is a good-natured “Buona fortuna con quell’.” It may be that Tuscany has too much good food, wine, and art for golf to become as revered as it is in other parts of the world.

A similarly relaxed attitude prevails at the spa, where Terme di Saturnia’s unofficial motto is “health through pleasure.” This philosophy would have been familiar to the ancient Romans, who saw thermal bathing as hygienic and curative but also enjoyable.

The resort’s medical director, Dr. Piergiorgio Calcaterra, nods his head as I tell him that the water in the spa’s massive pool felt oily to me. “The water is full of mineral salts,” he explains. “There are 2,790 grams in every liter—carbonic, sulfur, potassium, magnesium, calcium. There is also a lot of hydrogen sulfide. That’s why you shouldn’t spend more than half an hour in there at a time.”

Calcaterra then launches into a technical discussion of the antioxidant effect of the water and the way in which repeated exposure to it bolsters the body’s defenses against free radicals. “This,” he says, “is the future.” He is just warming to the topic when he pauses and asks, “Do you mind if I smoke?”

After finishing his remarks on antioxidants (and his cigarette), Calcaterra describes the golf wellness program that Terme di Saturnia recently implemented. It includes golf-specific massages, stretching regimens, and back exercises. Americans, he says, should plan to stay at the resort for at least five days to enjoy the benefits of the program fully. Though tempting, a five-day stay at Terme di Saturnia would provide only a taste of the indulgences Tuscany holds for golfers.

food, not spa treatments or golf, is the primary source of pleasure at L’Andana. But then, the hotel is owned by Alain Ducasse, who is known for his cuisine, not for his short game or chakra. Set in the seaside resort town of Castiglione della Pescaia, in an area where Tuscan cowboys called butteri ride herd on the cattle that graze in the meadows, the resort does have a golf course—a three-hole track that can provide an hour’s diversion. The resort plans to expand the course next summer, but the layout in its present state seems like an afterthought. Nevertheless, L’Andana can have a magnetic effect on even the most dedicated golfer because of its restaurant, La Trattoria Toscana.

La Trattoria Toscana’s menu features such Tuscan fare as melting gnocchi and scottiglia of lamb (a light ragù sans tomatoes) that are served on the restaurant’s veranda, which overlooks the chef’s garden. Picnics (yes, in Tuscany a Ducasse restaurant has take-out food) can be arranged on the beach in the town of Punta Ala, 10 miles north of the resort, on the southernmost point of the Golfo di Follonica. The town’s picturesque marina, which sits directly below an ancient castle perched on a rocky hill, shelters yachts that can be rented for a day’s sail among the islands of the Arcipelago Toscano.

Farther to the north, three courses—Circolo del Golf dell’Ugolino, Poggio dei Medici, and Le Pavoniere—girdle the city of Florence, a situation that is both a blessing and a curse. Each course offers players challenges, but all are in competition for attention with Florence, one of the world’s great cultural attractions.

The Circolo del Golf dell’Ugolino, set in the Chianti Hills about 10 miles south of Florence, has a pedigree that dates to 1889. (The club was moved to its present location, in the town of Grassina, in 1933.) The course has hosted a number of important tournaments, including the 1983 Italian Open, in which Bernhard Langer defeated Seve Ballesteros and Ken Brown in a play-off. The greens are small, and, like the rest of the course, the putting surfaces are seldom flat.

Le Pavoniere is located 15 miles northwest of Florence, just outside the town of Prato. Here the large, American-style bunkering and inventive water hazards on 11 of the holes identify the course as an Arnold Palmer design. Many of the greens lie on the far sides of those water hazards, prompting stressful risk-versus-reward calculations as you prepare to hit from the gently rolling fairways.

Like Ugolino, Le Pavionere has no hotel, but lodging is a highlight at Poggio dei Medici, in the town of Scarperia, 15 miles north of Florence. The refurbished 16th-century Villa di Cignano, with its terra-cotta tile floors and exposed-beam ceilings, exudes Tuscan tradition. The resort sits in the foothills of the Apennine Mountains (its name translates as “Hill of the Medicis”), leaving golfers with many uneven lies along the holm oak–lined fairways.

A tasting of Chianti Superiore vintages on the clubhouse veranda at any of these three courses is a satisfying way to end a round. But that satisfaction might be tempered by the realization that instead you could be enjoying a Vin Santo served with almond biscuits at the Caffé Giubbe Rosse in Florence’s Piazza della Repubblica, just a few miles away.

back on the 14th hole at Terme di Saturnia, I have flown the green, and the ball has rolled to an unplayable lie against the trunk of an ancient olive tree. As I walk toward my ball, I look to the adjacent fields of wheat and sunflowers, where the topography closely resembles that of the course. Fream, who has been designing courses around the world for 40 years (the Pezula Championship Course in South Africa and Thousand Island Lakes in Hangzhou, China, are two of his recent works of note), moved very little dirt when making this course. High above the green, in the surrounding mountains, the villages of Saturnia, Montemerano, and Poggio Murella perch on the cliffs, while just below, steam rises from the thermal pool at the spa.

To avoid holding up my playing partners, who still are shaking their heads over the lie, I pick up my ball and head for the 15th tee. After all, if we hasten our pace, I will have time to take a walk through Saturnia and perhaps enjoy a caffé corretto (an espresso spiked with a shot of alcohol, often grappa) in the square’s sidewalk café.