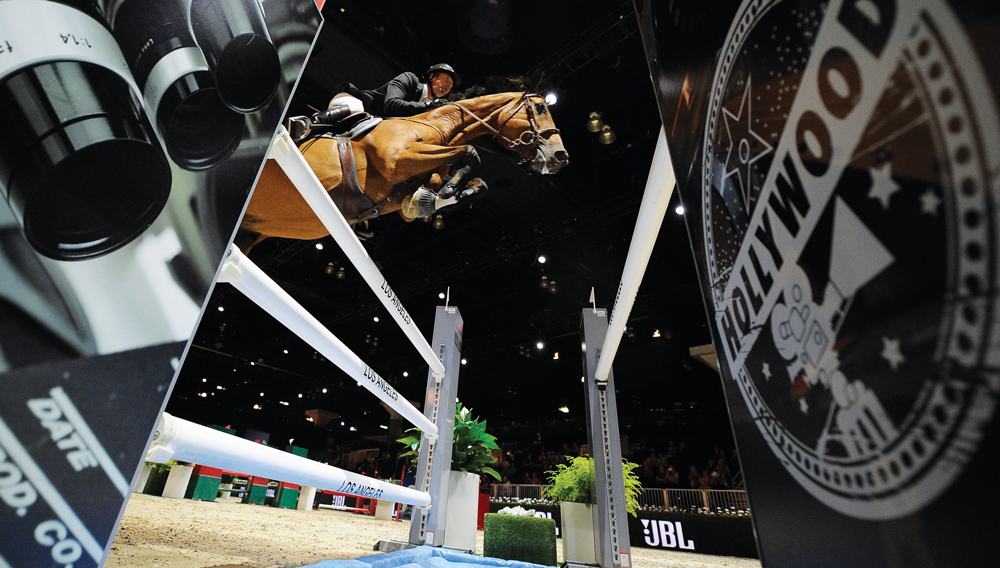 Jos Verlooy, who is 18, and Domino, who is 11, came of age together in Belgium, sharing a bond that allows them to communicate without speaking. The connection is apparent to those watching them here in Los Angeles, as Verlooy trots Domino, his show jumper, into an arena that is a labyrinth of 13 enormous obstacles, some taller than many people, others wider than most cars. The bay gelding pricks his ears as Verlooy steers him to a fence more than 5 feet high. The horse explodes into the air, tucking his front legs tightly against his chest and clearing with inches to spare. It is so quiet that the microphones pick up the creak of Verlooy’s leather saddle, Domino’s loud breathing as he gallops, the thuds as he lands. At jump No. 3, Domino faces a monstrous triple bar—as wide as an Escalade—arcing his neck and hanging in the air like Michael Jordan. Five jumps later he is at the “power line,” a tricky set of obstacles that demands a horse to respond instantly to the rider’s cues or crash. A couple of riders barely escape disaster.

Verlooy tugs on the reins. Domino pauses briefly to collect his 1,200 pounds of bone and muscle, coiling to spring. Everything about this ride has been so smooth—no irritated bucks, no tug-of-war for control—that even the waiters at the VIP seats stop to watch. The sold-out crowd senses this duo will deliver what they have been waiting for: a flawless round. But first the pair must master jump No. 10, a lightly balanced fence set distractingly close to the out gate. One horse after another peeks at the exit, loses concentration, and sends the top rail flying.

As the crowd holds its breath, Verlooy and Domino clear easily and are on to the triple combination. The three massive jumps are set one to two strides apart; imagine leaping your height from a standstill. Yet it is no problem for Domino, who heads to the last fence at a dead run. As he vaults No. 13, the crowd erupts. The teenaged Verlooy pumps his fist in the air. He has qualified for the all-important jump-off at the Longines Los Angeles Masters five-star Grand Prix—and a share of its $475,000 prize.

Show jumping is that rare sport in which men face off against women and teenagers are as common as middle-aged competitors. It takes place throughout the world, from its birthplace in Great Britain to obscure places like the tiny island of Grenada, which proudly issued a postage stamp in its honor. In Europe it is phenomenally popular, the No. 2 spectator sport behind soccer, with tens of thousands converging for revered competitions like the one in Aachen, Germany.

The classes in which show jumpers compete vary wildly—from beginners who leap 2-foot fences to very advanced riders who tackle 5-foot obstacles—but all follow the same scoring system: four faults for knocking down a rail, and elimination for a double refusal (to attempt a jump) on the horse’s part or a fall on the rider’s part. Riders must also race against the clock to finish within a prescribed time. The handful who go clear—acquiring no faults—move on to a second stage, the jump-off.

Grand Prix is the highest level of show jumping, with the tallest and widest jumps and the most prize money: $50,000 for a one-star Grand Prix and a minimum of $450,000 for a five-star. The largest concentration of five-star events is in Europe, where equine event producers band with luxury retailers—Gucci, Longines, Rolex—to stage numerous show jumping spectacles each year. The top riders mark their calendars by them, trailering their horses from country to country or arriving by jet from the United States, the Middle East, South America, and Asia.

It was big news, then, when the equine events producer EEM World expanded the Longines Masters Grand Slam—modeled after the tennis tour—to the United States this year. Thousands of horse shows are staged yearly around the country, but not on this scale. “We bring the best of show jumping to three continents: Asia, Europe, and, for the first time, North America,” EEM World founder and CEO Christophe Ameeuw said from his five-star training facility, the Ecuries d’Ecaussinnes in Belgium. “The Masters also function as an exclusive networking platform, the meeting point for horse lovers, neophytes, celebrities, VIPs, luxury brands, and corporations. And at the Los Angeles Convention Center we have the optimal logistics that we could not find in New York.”

The Longines Los Angeles Masters took place in September, and long before the bluebloods arrived, show director Frank Lombaers was walking the Convention Center’s cavernous spaces, pointing to where he would erect a Prestige Village around the horses’ warm-up arena, a mix of luxury retail booths, gourmet food and wine bars, an art gallery, and a stage for local performers. “People can fetch a glass of Champagne, some caviar, and watch the horses warm up,” he said. “I want to create a proximity to the athletes, so that the spectators can be a part of it, smell it, chat with the champions.”

On a late September morning a few weeks later, a jet carrying 51 elite European horses taxis to a stop at Los Angeles International Airport. Once at the downtown Convention Center, the visiting athletes settle into their stalls for a three-day quarantine before more than 200 other jumpers arrive. Grand Prix jumpers are the world’s costliest horseflesh. Owners pay hundreds of thousands for raw talent and millions for proven champions. These jumpers take years of expensive training to develop, prohibited by international rules to compete before the age of 7 and rarely hitting their stride before age 9.

For four days the action at the Convention Center is nonstop as junior, amateur, and professional riders vie for prize money totaling $1 million. The biggest draw is the final day’s five-star Grand Prix. The list of its 41 competitors reads like a show jumping who’s who: 28-year-old Scott Brash of Great Britain, No. 1 in the Longines world rankings; French champion Kevin Staut, a victor at the Hong Kong Masters; Switzerland’s Steve Guerdat, individual gold medalist at the Olympic Games in London; and many more.

Interest is keen in two up-and-coming Americans, Georgina Bloomberg and Jessica Springsteen, as much for their celebrity fathers as their riding. Springsteen, fresh from a win in August at the Furusiyya FEI Nations Cup Dublin Horse Show, likes her chances aboard her mount, Vindicat W. “For me, since I’m newer at this level, I like to have a horse that’s really brave and confident,” she says. “Vindicat loves to jump, so he really goes at the fences.”

The grandstand is full for the Grand Prix, as is the VIP section, where spectators enjoy a luncheon prepared by the Michelin two-star chef Yves Mattagne, who smiles and works the room. The monitors flash images of celebrity parents and spectators in attendance. As the first rider enters the arena, all eyes move to the ring. The tough course design by Luc Musette takes its toll. Decorated American Reed Kessler has a shocking double refusal. Springsteen’s Vindicat W takes down a rail.

Verlooy’s error-free ride that afternoon is one of six. A crew scurries into the ring to reduce the number of jumps to seven for the jump-off. As Verlooy and Domino rocket flawlessly over the smaller course, chef Mattagne, a fellow Belgian, cheers. The pair’s time of 38.11 proves unbeatable, and Verlooy is $157,000 richer.

Later, in the press area, a beaming Bloomberg gives credit for her third-place finish to a strategy she learned from her dad. “My horse isn’t naturally fast, so I wanted to focus on going double clear,” she explains. “Or as my father would say, ‘Just don’t screw it up.’ ”

Where the Champions Meet

A top show jumping event is the complete package: athleticism, drama, and glamour. Here are the sport’s most prestigious competitions.

This global enterprise, which runs from February through September, is newly revamped with support from the Saudi Equestrian Fund. Teams from countries in six regions vie at 20 qualifying events to reach the championship final in October. The 15 Europe-based qualifiers include some of the sport’s most historic shows, at Barcelona, Spain (established in 1902); St. Gallen, Switzerland (1909); and La Baule, France (1931). fei.org

Founded by Jan Tops, a Dutch equestrian and Olympic gold medalist, the tour invites only the top riders to compete at 14 different sites—including Doha, Qatar; Paris; and Shanghai—from April to November. globalchampionstour.com

The tour comprises three shows; the first is in September at the sprawling amoves to Europe and the world’s largest indoor jumping venue, in Geneva. The third installment, in May 2015, takes place at the Aachen, Germany, equestrian festival, which draws more than 350,000 spectators over 10 days. rolexgrandslam.com

The three events—the Gucci Paris Masters in December; the Hong Kong Masters in February, which includes a $700,000 five-star Grand Prix; and the new leg in Los Angeles in September (October in 2015)—represent the pinnacle in show jumping glamour. mastersgrandslam.com