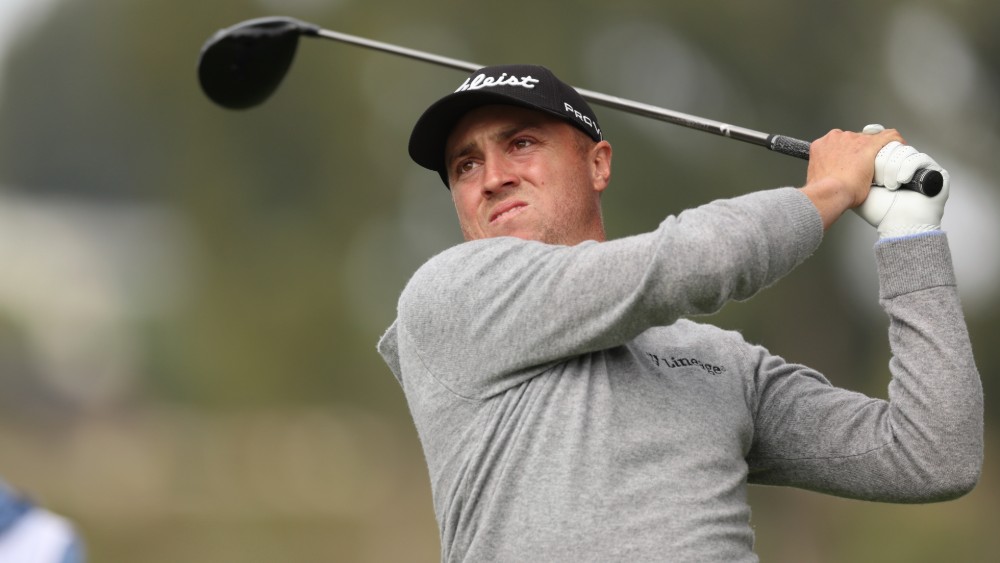 This week, the PGA Tour schedule officially kicks into high gear with a return to the Stadium Course at TPC Sawgrass, where golf’s fifth—though unofficial—major, The Players Championship, will be contested for the 48th time. “Any time you’re here at The Players, it’s a big deal,” Justin Thomas declared immediately following his victory last year. “It’s such a huge event. Everybody knows it’s a major. . .I don’t think you can go wrong calling it one. . .It’s just a great test of golf, which is why it’s The Players Championship.”

Ahead of Thomas’s title defense this week at Sawgrass—something that no player has successfully done—we sat down with the 28-year-old to discuss the tournament, his sneakerhead style and his strategy for one-upping Tiger Woods. Along the way we also discovered who cracked open one of Thomas’s special bottles of Pappy Van Winkle bourbon. (Hint: It wasn’t him!)

You’ve said that you knew after playing TPC Sawgrass for the first time that you were going to win there. What was it about the course that inspired that confidence?

It’s one of those places where I like how it looks off the tee, and it’s a course that really forces creativity out of the player—you have to hit a lot of different shots. If you’re hitting it well and you’re hitting a lot of fairways, you can make a lot of birdies out there. But if you’re not, you’re going to be grinding and struggling to break par, and I think that’s truly the sign of a good golf course when you see a fluctuation of scores as much as you do there.

Are there other courses where you’ve yet to win that you feel similarly about?

Augusta National, for sure. I love everything about Augusta. I know a lot of the subtle nuances of the course and the greens—where to hit it and where not to hit it. I feel comfortable there; a lot of holes just fit my eye well. I do feel confident that I’ll win there at some point, if not multiple times, in my career. But at the end of the day, it’s all about execution. It’s still golf. You don’t know what you’re going to get, so there’s no guarantees.

Thomas takes a shot over the water.  Nick Hamilton for Titleist

Tiger Woods was the last player to win a second Players Championship, but his victories were 12 years apart. If you were to win at TPC Sawgrass again this year, becoming the first player to win there back-to-back, would you use that as ammunition in your ribbing war with Tiger? If so, how do you think he’d respond?

I know better than to get in a golf accomplishments argument with Tiger Woods. I might be a college dropout, but I’m a lot smarter than that!

When were you first introduced to the Stadium Course?

I played in the AJGA (American Junior Golf Association) Junior Players Championship as a 15-year-old back in 2008.

During those junior golf days, you were living in Louisville, Kentucky. If we were to go back there now, where would you take me?

First off, we’d go to Harmony Landing, the course I grew up at. It’s a great, old school, fun little tree-lined course to play. It’s just a “no rules” kind of place—a fun track to go zip around. I’d probably also go to Gerstles in St. Matthews. It’s a super old-school bar where my buddies from high school and I have spent a bunch of nights. St. Matthews is a great little area for restaurants and bars with a handful of places that you can walk to.

When most people think of Louisville—and Kentucky in general—one of the first associations they make is to bourbon. Are you a bourbon drinker yourself?

Yeah, I like bourbon. I’ve gotten to know a lot people at Woodford Reserve. I’ve actually created two barrels there, which is sweet. It’s my own special blend, if you will. So I have some of those bottles at home.

Are there any other significant or valuable bottles of bourbon on your bar?

I have been very fortunate to be given some cool gifts. In 2017, Julian Van Winkle came out to my dad’s club, and he had two bottles—I think a 10- or 12-year Pappy—with special engraved labels to commemorate my victory at the PGA Championship that year and also for winning the FedEx Cup. It was really cool and very thoughtful of him. So I have those special bottles at home. Bourbon is definitely more of a Kentucky drink than a Florida drink. We don’t exactly have those 30- and 40-degree nights in Jupiter, Florida like we do in Louisville, where you just want to sit around a bonfire. But there’s still occasions for it.

I’m guessing winning a tournament on the PGA Tour is one of those occasions?

After a win, give me whatever. I don’t care. [In that moment] I’m just happy that I won, but I’m tired.

So when would you be inclined to open one of those special bottles of bourbon?

I mean, obviously, I’m not just opening up a bottle of Pappy for nothing. Three or four years ago, my parents were in town—and this is before they lived in Florida. My dad likes to have a bourbon every once in a while at night, so I said, “Dad, you know, if you want a bourbon, help yourself.” And he responded, “Oh, I know, I got one.” So I asked, “Well, what did you pour?” And he said, “Oh, I just saw some of that Pappy over there, so I just had some of that.” And I look and there’s like this much gone (holds up his fingers to mark two inches). So I said, “Dad, you just opened up this Pappy because it’s a random Tuesday and you felt like that was okay?” And he replied, “Well, you’ve got to drink it eventually.” So that’s how that bottle of Pappy was opened.

Sticking with the bar talk, we know that your home bar is part of a larger man-cave area, one accented with a swanky red-felt pool table that’s embossed with the University of Alabama logo. We get the sense you must spend a fair amount of time in that room. Are we right?

I do. It’s very seasonal, I would say, and situational. I spend a lot of Saturdays and Sundays in there in the fall. I’ve got five TVs up on the wall and then one at the bar, as well. I love football, so I’ll basically watch as many football games at once as I can. I’ve had a lot of great nights and fun times with friends up there. I used to live with Bud Cauley, and we would put in some serious sessions playing pool. There are no windows up there, so you can kind of lose track of time.

Your man-cave also features personalized sports jerseys from pro athletes who have become friends of yours. One of those athletes is Michael Jordan. What’s it like hanging out with him and playing golf together?

He’s a lot of fun to play with, and every round is competitive. They’re just competitive in different ways. Some are fun competitive rounds where we’re chattering all day, and others will be very serious with very high stakes where we aren’t talking as much but we both still want to beat each other’s brains in. So it doesn’t matter if he and I are playing golf, or gin in the locker room, or we’re fishing. Whatever it is, he’s going to want to beat me or whoever he’s going against. You don’t get to where he got in his career without that hunger to win no matter what you do. So it’s definitely fun playing with him.

And you share that same competitive spirit all the time?

For sure. I don’t like to lose at anything. What’s the point of doing it if you’re not hoping to do it better than other people? That’s just how I am.

Let’s talk about the other Jordans in your life. We hear you have an affinity for collectible sneakers. Would you consider yourself a collector?

I don’t know if there’s a difference between sneakerhead and sneaker collector, but I wouldn’t call myself a sneaker collector. I don’t buy shoes with the intention of collecting them, like a [Miami Heat forward] PJ Tucker kind of thing where he’s got the shoes that people who created them don’t even have. I’m not even close to that. But I like having shoes and the fun is getting the ones that are exclusive and getting them early release.

The Union Air Jordan 1 LAs are one of the golfer’s favorite pair of kicks.  Nike

What attracts you to Jordans in particular?

Street style is my sense of fashion off the course, so a good pair of Jordans goes with a lot.

If you were to pull out a few favorite pairs from your closet, which ones would you grab?

My favorite, most comfortable shoes are a pair of Union Jordan 1s—the LAs. I’ve worn them a lot, but they’re just broken in perfectly. They’re one of my favorite, stylish shoes with good coloring. They go with just about everything. And I have a couple pairs of Jordan 1 Off-Whites that I like a lot. I also have a pair of Jordan 1 J Balvins that are pretty bizarre. They have a lot of different colors and stuff going on with them, but I don’t wear those too often.

It sounds like you’re never buying shoes just to have them. In other words, if you won’t wear them, then they’re not taking up space in your closet. Is that right?

I do have some shoes that I just don’t have the opportunity to wear that often. I don’t have very many outfits where I could wear a red-and-yellow shoe, for example. But when I do, I’ve got a pair.

Have you made any exceptions to that rule?

There was a pair of Low Jordan 1s that came out before Halloween. Naturally, they’re orange and black, but orange is an absolute no-go color for me because of Auburn and how much I hate them. So I don’t wear any orange. But these shoes are hard to get and they’re pretty expensive, and I don’t just want to give these away. So my pettiness decided that I’m just going to save them for Halloween. I just can’t quite get myself to give them away, so it’s the one time a year that I’ll wear them.

Back on the subject of golf….You’ve had the good fortune to play a lot of spectacular golf courses over the course of your career, but which courses are still on your bucket list?

One last question for you: If you knew that your next round of golf would be your last, where would you choose to tee it up and why?

I’d want to play at Baker’s Bay in the Bahamas. I could wear swim trunks and no shirt, no shoes. I could play music as loud as I want and jump in the ocean between holes. I could have some great food, and a lot of cocktails, and I’d die happy.