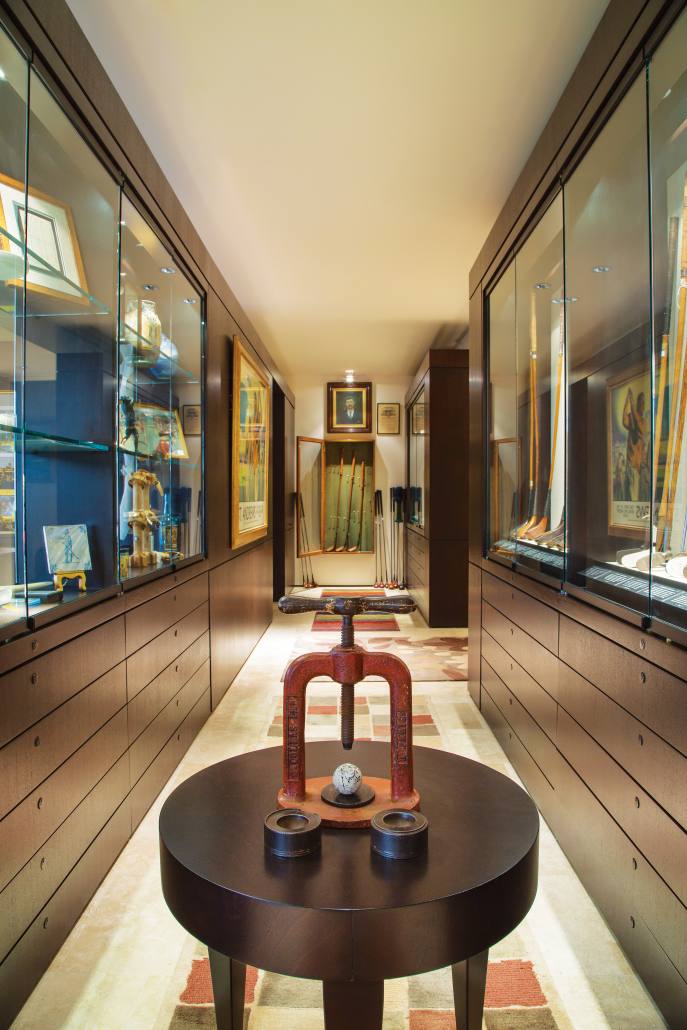 Dick Estey dominated amateur golf tournaments until he had to quit playing. But that did not stop him from dominating the game.

About 20 years ago, Dick Estey’s life was destined to change. At the time, he was living like a PGA tour pro, although without a tour card or, for that matter, the professional status. Still, he was competing in—and winning—senior amateur tournaments and championships around the world. By the early 1990s, Estey had accrued almost a dozen national and international titles: He won the Northwest Senior Amateur Championship and the Mexican Senior Amateur Championship multiple times, as well as the 1989 Canadian Senior Amateur Championship, among other accomplishments. All signs pointed to a prosperous future and a long reign over the senior amateur circuit—except that Estey’s lower back had taken all that it could. “Golf has been a major part of my life for a long, long time,” he says. “It’s just a bitch getting old.”

He recalls lying on his bathroom floor in his early 60s, writhing in pain from a lower-spine injury and thinking he had swung a club for the final time. Surgery was planned, but there was no guarantee that it would restore his health to a point where he could tee it up again. The prospect of a life devoid of golf was something Estey could not fathom; he had grown up playing the game, after all. So he turned his attention from dominating modern amateur championships to becoming the world’s foremost collector of vintage-era equipment. He started by visiting antique shops near his home in Portland, Ore., looking for an “old club.” When he finally found one—an undistinguished wooden-shafted example that cost $100—the acquisition became the first step down a new fairway.

Since then, Estey has amassed a private collection of vintage golf equipment and artifacts that rivals that of any public museum, including the World Golf Hall of Fame in St. Augustine, Fla., with many of his pieces documented in Jeff Ellis’s The Clubmaker’s Art, the definitive tome on vintage clubs. It is a treasury that tells the history of the game as it was played centuries ago, and as guests to Estey’s private museum in Portland can attest, it dispels many of the misconceptions surrounding the game and its early beginnings.

“Are you ready for this?” Estey asks me, holding a thick-handled wooden relic that looks less like a golf club and more like an ancient farming tool or a primitive instrument of war. “Feel how heavy this is. Make sure you use two hands.”

He tosses me the club, which jerks my hands toward the floor as I grab hold of it; it has to weigh at least 10 pounds. I take a makeshift stance and waggle the club, still trying to comprehend how a golfer in the 18th century could have swung something of this magnitude more than a handful of times during a round. “I think they must’ve used it like this,” Estey tells me, mimicking the stance of a hockey player.

The Dutch club corresponds with a series of ceramic tiles, circa 1700, that are displayed elsewhere within Estey’s museum and depict Dutchmen playing an early version of the game called kolf. He acquired the tiles during a Christie’s sale in London in 2012 for $25,350, almost $10,000 more than their high estimate. But for Estey—who made his fortune running the Estey Corp., his family’s multifaceted business, and making some shrewd real-estate investments—the price he paid was a necessary sacrifice. “What makes a collection go is strictly monetary,” he says. “It comes down to how much money you’re willing to invest. Any item that has come to auction that I’ve really wanted, I stayed with it and got it. In many cases, I’m sure that I overpaid, but I have the item and I feel really good about that.”

In contrast, Estey has forced himself to ignore some items that have come up for sale, despite the fact that they were wonderful mementos or, in some cases, associated with players he had admired as a junior golfer. After winning the Oregon Junior Amateur Championship in 1947, Estey was invited to caddy for Sam Snead later that year during a match play tournament at the Portland Golf Club. Estey has fond memories of the event and would love to own some of Snead’s championship trophies, like the Claret Jug from Snead’s 1946 British Open victory. That trophy sold for almost $263,000 during a Heritage Auctions sale in August 2013, but Estey was not among the bidders.

“You have to forget some of those other things that you want, as nice as they may be, because there are other things that you really should have,” he says, explaining that his intention is to build a collection that tells the story of the game and its evolution. As such, the display cases throughout Estey’s museum are devoid of modern-era trophies, autographed flags from major championships, and green jackets won at Augusta National, artifacts that most people associate with world-class golf memorabilia collections. Instead, he proudly displays the putter that Willie Park Sr. used to win the British Open in 1863, a club that Young Tom Morris used to take the British Open title in 1870, and a Dickson Play Club, the only example known to exist and the work of Andrew Dickson, a club maker referenced in the first golf book, The Goff, written in 1743. Estey paid an estimated $400,000 for the Dickson club. “That doesn’t mean that was the right amount of money to pay,” he says with a chuckle. “It just means that I wanted the damn club!”

Estey first encountered the game of golf in much the same way that Francis Ouimet did. Ouimet grew up just across the street from the Brookline Country Club’s 17th fairway in Brookline, Mass., and went on to win the U.S. Open as an amateur when it was played there in 1913. Similarly, Estey grew up near the Eastmoreland Golf Course in Portland. His parents did not play, but Estey became a competent player by the time he was a teenager, and in 1946 he won the Oregon Boys Championship. “I was probably not as good as I thought I was,” Estey admits, “but I was winning.”

That victory put Estey’s photo in the paper, and that is when his father decided his son should have proper lessons. They visited a local pro named Boyd Buster, and thus began Estey’s official education in golf. Decades later, he found an old, carved wood sign for Buster’s golf school, as well as a wooden-headed “Boyd Buster” driver. Now both are on display in Estey’s guest residence.

Estey aspired to golf professionally early on, but that all changed after he caddied for Snead in 1947 and saw that the pro from Virginia earned only a $500 war bond for his victory in that match play tournament. So Estey instead pursued a traditional business career and returned to championship golf only after he was financially secure. Then came his painful lower-spine injury in the 1990s.

As it turns out, Estey’s back surgery was successful—so successful, in fact, that he has gone on to win a handful of senior amateur championships. Now 84 years old, he plays casual summer rounds at the Waverly Country Club in Portland—the oldest golf course west of the Mississippi River—and winters in the Palm Springs, Calif., area. But perhaps his greatest accomplishments occur as a collector and caretaker of the game’s history. About 15 years ago, Estey purchased a second residence on the 21st floor of the Koin Tower in Portland, where he lives with his wife, Judy, and their two Havanese dogs. He has converted part of it into his current golf museum, which also has space for his office and a guest room. Almost every wall within is lined with displays of antique and historic golf clubs, many of which reflect a startling ingenuity.

If you thought that monstrous drivers only emerged when Callaway debuted its Big Bertha in 1991, Estey can point you to a jumbo driver, circa 1910, that was fashioned by Bernard “Ben” Sayers, one of golf’s early professionals. If you thought club makers only recently began offering drivers that could be adjusted to different lofts and settings, Estey will lead you to an entire cabinet full of adjustable clubs, many of which were made more than a century ago. He will also proudly lead you to a display of square toe irons—clubs fashioned by blacksmiths and dating to the 1700s—and more than 30 feather balls, one of which is from Prestwick, Scotland, where the very first Open Championship was played in 1860.“When I first started, I thought just getting a feather ball was unbelievable,” Estey says. “I had been around golf my whole life and I didn’t know they even existed.”

Estey is now well aware of the historic golfing artifacts that exist, and he is particularly knowledgeable about where those important items reside. Incidentally, many can be found in his museum. “I know I can’t compete with the R&A,” he says, referring to the Royal and Ancient Golf Club in St. Andrews, Scotland. “But I don’t know of another collection in the world that competes with mine.”