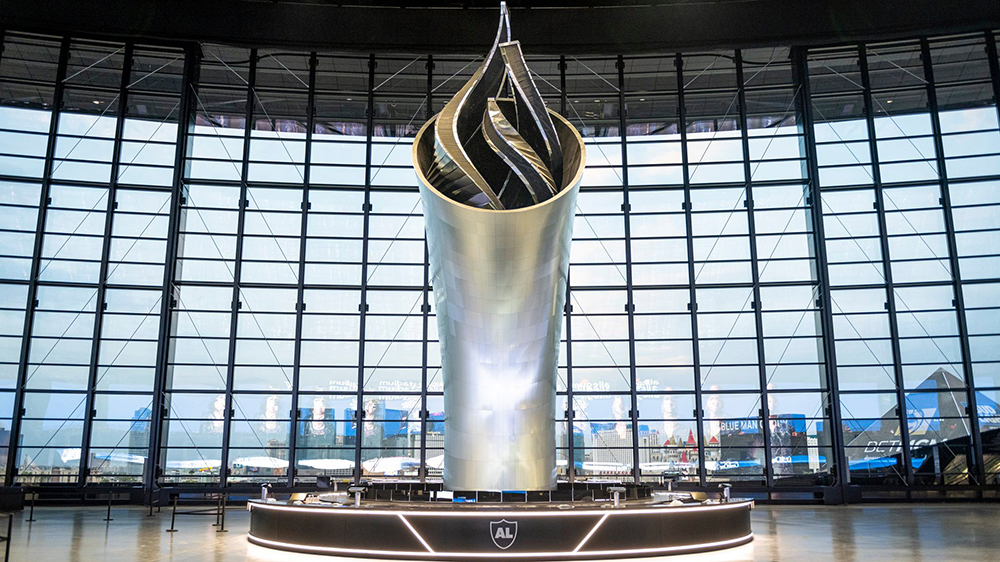 At 2-2 the newly relocated Las Vegas Raiders aren’t currently atop the NFL standings. But there is one area in which the team towers over the league: Its stadium features the tallest 3-D-printed structure in the world.

The Raiders’ new Sin City venue, Allegiant Stadium, isn’t just home to the team; it’s also home to the nine-story Memorial Torch, a giant metal sculpture with curving flames coming from its opening. The monument, which was commissioned by the team to honor its late owner, Al Davis, was built by Las Vegas-based design firm, Dimensional Innovations, according to Design Boom. And, as you’d expect from such a soaring piece, a lot of work went into getting everything just right.

Standing at just over 93-feet tall, the structure is made up of 225 3-D-printed carbon-fiber blocks. These blocks, which are made of carbon fiber reinforced by polycarbonate composite, are produced by one of the three large-scale additive manufacturing (LSAM) machines in the US and then machined by five-axis router so that each piece fits together perfectly. The torch was then covered with 1,148 aluminum panels that give the monument its metallic look. These panels were then engraved with the Raiders’s iconic logo and centered in the middle of a circular bar that bears Davis’s first name, “Al.”

“Our team has worked relentlessly over the past year to develop, print, fabricate, test and install the memorial torch to ensure it conveys the symbolic flame that burns brightest in the Raiders organization,” Dimensional Innovations CEO Tucker Trotter said on the firm’s website. “The enormity of the torch, both physically and ideologically, will carry on the memory of Mr. Davis for years to come and we’re proud to have played a part in that.”

The result of over 50,000 hours of work, the Memorial Torch, made its debut on July 30, the same day that the Allegiant Stadium was officially opened. It is located in the arena’s north endzone area, in front of a pair of giant retractable windows that look out over the area. Sure, it may not offer the gravitas of a certain other famous torch here in New York, but it’s impressive in its own right.