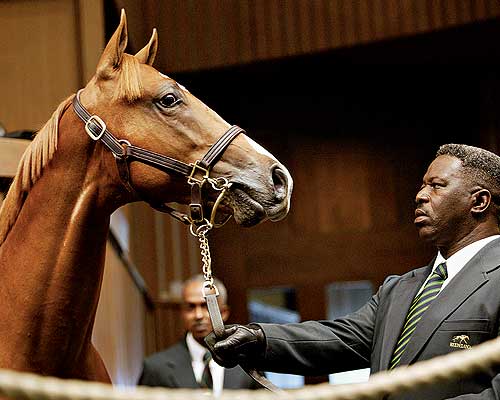 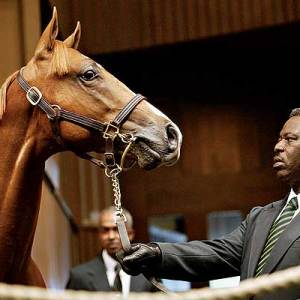 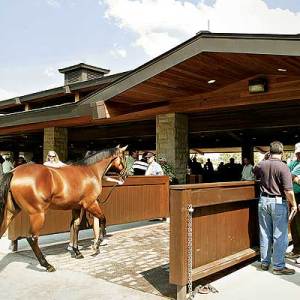 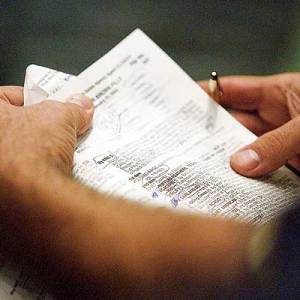 Like magistrates presiding over an inquisition, a trio of auctioneers sit high on their perches at the back of the auditorium’s stage while a chestnut colt paces anxiously before them and about 300 horse owners, trainers, and other interested parties. All have gathered here this afternoon, the second day of the annual September Yearling Sale at the Keeneland Racetrack in Lexington, Ky., knowing that one of the 3,370 horses that will be sold for a collective price of nearly $325 million during the two-week event could eventually become a Kentucky Derby or even a Triple Crown champion. The Keeneland Sale has been the source of 16 Kentucky Derby winners since the track introduced yearling sales in 1944.

So far, more than 400 horses have been brought onto the stage for display, sold, and then led off, costing their new owners as little as $40,000 or as much as $3.1 million. During these first two days, when the best horses are offered, auction prices average $430,000, with wide variation in both directions. The bay filly that preceded the chestnut colt sold for $750,000, an above-average price but not an extraordinary one.

To the casual observer, the new arrival, offered for sale by the Lane’s End horse farm in Versailles, Ky., is largely indistinguishable from the legion of other handsomely groomed Thoroughbreds presented to the audience. However, the trainers and buyers who have been roaming Keeneland’s paddocks and thumbing through their auction catalogs over the past two days know that this horse is the one to watch. Its pedigree, as described by auctioneer Kurt Becker in a pleasant, Midwestern twang, is remarkable. The colt’s father is Storm Cat, a stallion that earned almost $600,000 over the course of its racing career and sired 123 racers that have won purses totaling $60 million. Its mother is Welcome Surprise, a half sister to Kentucky Derby winner A.P. Indy, which earned $2.9 million over its career.

Given these family ties, it is tempting to envision the yet-unnamed horse—designated only by the number on its hip, 426—as the next Secretariat. In fact, the auction catalog reveals that Secretariat, which won the Triple Crown in 1973, appears twice in the colt’s pedigree, three generations back. The same generation also includes another legendary sire, Northern Dancer, a Canadian Thoroughbred that won both the Kentucky Derby and the Preakness in 1964 and had a one-year, 18-race career that included 14 victories, two places, and two shows.

No other factor influences a horse’s price more than pedigree, explains Dave Switzer, executive director of Kentucky Thoroughbred Owners and Breeders Inc. and the Kentucky Thoroughbred Association, both horseracing trade organizations. Occasionally a horse will perform beyond the capabilities indicated by its bloodline, but these Cinderella stories are rare, and so horse breeding remains an unapologetically eugenic enterprise. “Every once in a while you’ll get a fluke, a horse that does better than its genes were meant to,” says Switzer, “but you can’t ignore the breeders’ adage: ‘You breed the best to the best and hope for the best.

As horse number 426 paces nervously at the front of the stage, it displays the muscularity and well-proportioned bone structure that trainers look for in a champion. All of the colt’s suitors already are familiar with its physical virtues, having toured Keeneland’s paddocks in the days preceding the sale and requested that this horse and others be led out of their stalls and paraded for inspection. Even now, after the sale has begun, buyers and trainers are at the paddocks, peering intensely at the animals as they pace, looking for flaws in bone structure, posture (or “conformation,” in horse breeding parlance), and gait that may inhibit the animals’ ability to compete. They may detect thin cannon bones (the bones between the knee and the ankle joint) that render an animal prone to injury, an overly long neck that puts a horse out of balance and can restrict air flow to and from the lungs, or a severe dip in the animal’s back that weakens its spine.

Getting Into The Game

Before bringing the checkbook to the Keeneland auction or any other sale, newcomers to Thoroughbred racing should consider attending one of the training seminars offered by the Greatest Game, a Kentucky-based concern created with the support of the Keeneland Racetrack, the Thoroughbred Owners and Breeders Association, and the National Thoroughbred Racing Association.

The seminars include presentations by breeders, attorneys versed in equine law, and racehorse owners. The organization also connects potential buyers with consultants who have signed a code of ethics. While the Greatest Game encourages people to become involved in the sport, it does not downplay the financial risk. The establishment warns would-be owners that purchasing a Thoroughbred is a speculative investment, and it requires seminar participants to sign waivers stating they acknowledge the risk and will not hold the group responsible for any losses.

People shouldn’t go into it expecting to make money,” advises Greatest Game President Gay Fisher. “Your objective should be to break even and have some fun.

Some features may not necessarily impede performance, but they do suggest a compromise between velocity and endurance. For example, a wide chest that will give a horse the oxygen necessary to achieve quick bursts of speed also will add to its overall weight, leaving it vulnerable to down-to-the-wire challenges. Finding perfection is impossible. “You look for flaws you can live with, and there are flaws you can’t live with,” says Sandy Hatfield, stallion manager at Three Chimneys, a horse farm in Midway, Ky., that is the home of Smarty Jones and several other hugely successful Thoroughbreds.

In addition to conducting their own external examinations of the horses, buyers typically hire veterinarians to review X-rays of the animals’ bone structure for signs of weakness or chipping. Keeneland keeps the images on file, but neither the track nor the seller retains any liability for undetected bone flaws, explains James Williams, Keeneland’s director of communications. “If you buy a horse and find out it has a chip in its ankle, you bought it,” he says. “You need to do your homework.”

After becker details colt 426’s pedigree, a second auctioneer, Cris Caldwell, initiates the bidding. His tone is at once as somber as that of an anchorman describing a state funeral and as rhythmic as that of a square dance caller leading the folks through their paces at the local Grange hall. “Hip number 426, the one you’ve been waiting on,” he says. “Who will give me $2 million to get him started?”

When there are no takers, Caldwell retreats to $1 million, then to $500,000, and finally to $200,000 before acknowledging a bid from the back of the hall. The ice has been broken; within 15 seconds the bidding soars to more than $1 million, and within 30 seconds it is at $2 million. At this juncture, Caldwell attempts to raise the price by $500,000, but no one responds, so he drops the asking price to $2.2 million, which elicits a bid. Moments later he has a $2.5 million bid, and before long, he is requesting and receiving $3 million. Aside from Caldwell’s rapid-fire, singsong staccato, the auditorium is silent, and the audience is motionless—well, nearly motionless.

Throughout the auction, bid spotters, located on the floor in front of the stage, scan the crowd. Their practiced eyes detect the slightest gesture—a barely perceptible nod of the head, a wink of an eye, or a sidelong glance—indicating a bid. Buyers have good reason not to flaunt their bids, explains Cot Campbell, president of Dogwood Farms, a horse farm in Aiken, S.C. Campbell, the man who helped introduce and popularize the syndication system that enables multiple buyers to share in both the risk and reward of owning a horse, has a knack for finding relatively inexpensive winners. Therefore, if his peers discover that he is interested in a horse, Campbell’s reputation alone can drive up the price. “I’m not particularly anxious for anyone to know I’m bidding,” he says. “I save money by being discreet.”

Whatever secret signal a bidder uses, it prompts a shout or a raised hand from a spotter, which in turn elicits a polite “thank you” from Caldwell, who increases the bid by another half million or $200,000 until he has muscled the price to $4 million. By now, most of the buyers in the auditorium have become spectators. “I’ve never heard it so quiet here in my whole life,” Caldwell says, bringing the bidding to an abrupt halt and clearly relishing the silence. Then he is off again. “Four million, two! Four million, five! Thank you. Four million, seven! How ’bout five million? Do you want to bid five million? How about four million, seven? Thank you.”

When t he bidding reaches this level, the chances of the future owner recouping his cost during the horse’s racing career are virtually nil. To be sure, some horses turn huge profits for their owners; Seattle Slew, the 1977 Triple Crown winner with career earnings of $1.2 million, was purchased for $17,500. But overcoming a $5 million purchase price—plus the $40,000 or more a year it costs for boarding, training, and medical care—in stakes racing is a long shot. A price this high is a function of the horse’s anticipated value as a sire.

Consider Smarty Jones, which earned $7.6 million by winning eight of the nine races that it entered, including the first two legs of the Triple Crown. The horse commands stud fees of $100,000 from mare owners, and Smarty Jones’ services will remain in demand provided that its progeny enjoy successful careers. If a sire’s offspring fail to excel at the track, its value as a stud plummets, regardless of the stallion’s own illustrious career. Indeed, only one out of every 10 stallions succeeds as a stud, says Robert E. Hoeweler, owner of Woodlynn Farm, a horse farm in Lexington, Ky. “This isn’t a game for guys in short pants,” Hoeweler says. Mares are hardly a sure thing, either. “If you’ve got some that have had four foals and they can’t outrun a fat man,” he says, “it’s time to get rid of them.”

That is easier said than done; as the Kentucky Thoroughbred Association’s Switzer points out, horse owners tend to become attached to the animals, much more than to their other physical possessions. “Try patting a 100-foot yacht,” he says, “and then pat a Thoroughbred and see which one gives you a better feeling.”

At this point, the auctioneer is straining his capacity to reach into the wallets and the psyches of those who remain in contention. Finally, at $8 million, one of the bidders loses his nerve (or comes to his senses) and walks out of the auditorium. “They’re walking away,” Caldwell says in a mournful tone that instantly changes to hopeful when he calls out one last time to the departing bidder. “Would you like to turn around and bid eight million, one?” When the bidder ignores Caldwell’s offer of redemption, the auctioneer bangs his gavel. The market has issued its verdict.

The horse is sold to Japanese trainer Hideyuki Mori for $8 million, the loftiest price by far for any horse at this year’s event, but not a record. In July 1985, Seattle Dancer sold at Keeneland’s annual yearling sale for $13.1 million. Its career earnings were a little more than $152,000. “To play in this game, you have to be one who doesn’t brood on what-ifs,” Campbell says. “Some people, this sport will drive them crazy. They should not touch it with a 10-foot pole.