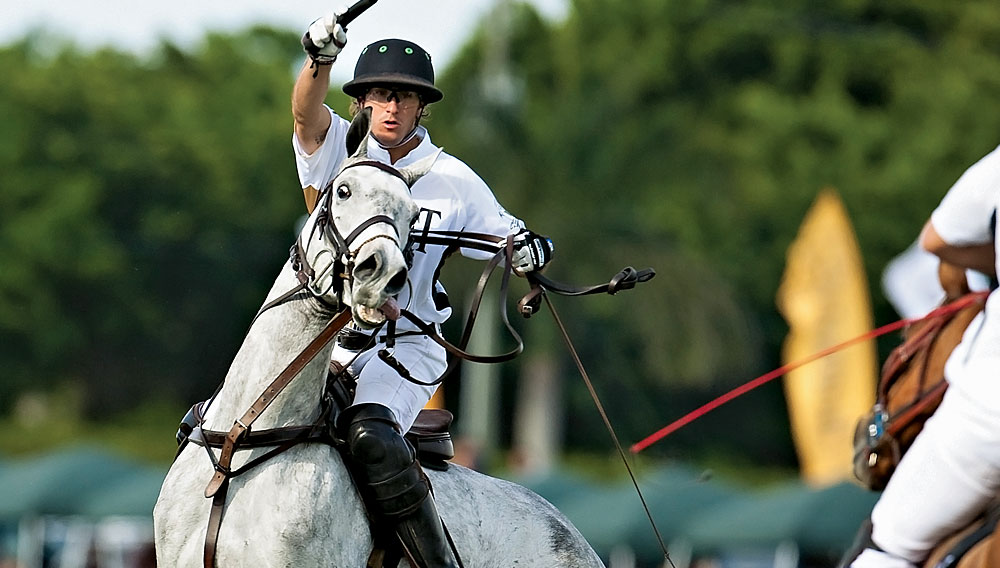 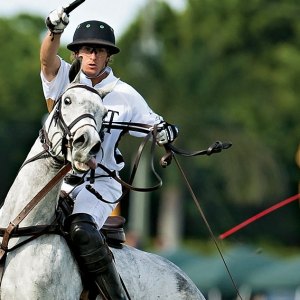 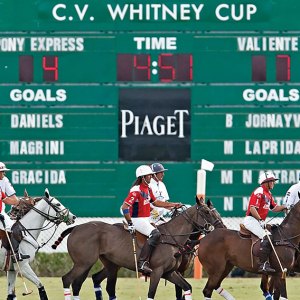 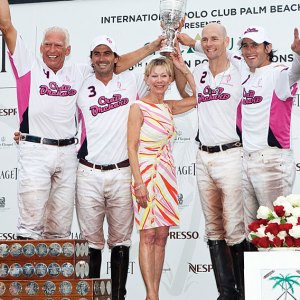 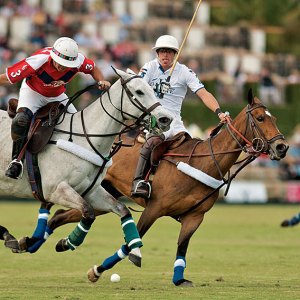 Nic Roldan checked on his female friend shortly after arriving in Argen­tina in mid-November. Actually, she is more than just a friend; she is a business partner and at times a confidant. She can be high-maintenance, but she has been good for Roldan. He credits her with helping him emerge as one of the world’s top polo players. So naturally he wanted to be sure his mare, China, was in good spirits.

“I have to be around the horses, making sure they’re at their best,” Roldan said from Argen­tina, not far from Buenos Aires, where he was born. He now spends most of his time in Wellington, Fla., and New York. In Welling­ton, where he lives, he is near his home field, the International Polo Club Palm Beach. In Manhattan he can be close to his business contacts at Swiss watchmaker Piaget, which employs him as a brand ambassador, and the Wilhelmina model agency, which has placed him in fashion shoots for GQ and other magazines.

Roldan, who turned 28 in December, was named one of Vanity Fair’s”Hottest Horsemen” in 2009 and was called “hunky” in a New York tabloid headline. The story under the headline noted that he was single and available. Yet when contacted in Argentina and asked about the appeals of polo, Roldan did not respond like the playboy he has been presented as. “There is the Champagne and dressing up,” he said. “And, yes, people do like to put the divots back in, but it’s so much more than that. It’s the barns, the horses, the beauty of it. People should talk to the trainers who get up at 6:30 am and sometimes don’t leave until 7:30 at night. Appreciate these horses, the true athletes. Spending time with them is how you truly understand what this kind of life is all about.”

Roldan, China, and a few of China’s stablemates were in Argentina, at La Dolfina polo club in the town of Cañuelas, about 30 miles from Buenos Aires, to compete in the Diamond Cup, one of the final tournaments of the 2010 season. In February and March, Roldan and company will be back in Wellington, at the International Polo Club Palm Beach, to compete in the C.V. Whitney Cup and the Piaget Gold Cup tournaments (see sidebar).

As the Gold Cup concludes, the U.S. Open Polo Championship will begin at the IPC, and it will continue into mid-April. Roldan, whose father was a member of the Sultan of Brunei’s professional polo team in the late 1970s and early 1980s, has been playing polo since he was 8 years old. At age 15, he turned pro and rode for the team that won the U.S. Open, becoming the youngest Open champion ever.

At the IPC tournaments, Roldan will be hailed as a legend and be a focus of the hometown crowd. But in Argentina, during the Diamond Cup matches, it was a different story. In this tournament featuring the world’s top players, all eyes were on the best of them all, Argentina’s 35-year-old Adolfo Cambiaso. “He’s beyond Michael Jordan and Tiger Woods,” Roldan said of Cambiaso, who also is sponsored by a watchmaker, Jaeger-LeCoultre. Cambiaso’s team captured the triple crown at the IPC last season, winning the Whitney Cup, Gold Cup, and U.S. Open championships. In the final match of the Whitney, Cambiaso scored seven goals in his team’s 11–9 victory. He scored five goals in his team’s 12–7 victory in the Gold Cup final.

“He has no flaws,” continued Roldan, speaking about Cambiaso before the start of the Diamond Cup. “It’s the hand-eye coordination, but also the way he stays in control of himself. He won’t beat himself, and that’s how the great ones are. You have to hope for a little bit of luck to win.”

Which team Roldan and Cambiaso play for and whom they play with varies from tournament to tournament. At the IPC events last year, Roldan was a member of the Piaget-sponsored squad. In the Diamond Cup, he played for Punta del Este, a polo club from Uruguay. Cambiaso—who in 1995 cofounded La Dolfina, the club that hosted the Diamond Cup—played for a team called AA 2000.

Polo contests traditionally take place on a field that is 300 yards long and 160 yards wide—an area equivalent to about eight football fields. The two goalposts at either end of the field are set 8 yards apart. A match is divided into chukkers, each of which lasts seven and a half minutes. In this tournament, as with most major tournaments, the teams will play six chukkers per match.

Each player has different responsibilities depending on his position. The player manning the Number One spot is akin to a striker in soccer, focusing primarily on driving the ball through the opponent’s goal posts. Number Two can be a scoring threat, but he also should be prepared to play defense when he has to. Number Four stays back on defense and protects his goal. Number Three is the quarterback, often initiating the transitions from offense to defense, using his mallet to strike the ball up the field and create a scoring opportunity for Number Two or Number One. He usually is the team’s most skilled player. Cambiaso almost always plays the Number Three position, and Roldan often does.

A polo player does not need to be muscular; they tend to be long and lean, like tennis players—or models. But he must be agile, able to adjust to the horse’s movements in a split second as the steed plows forward faster than 40 mph. One sudden slide by a horse could leave an unprepared rider with a career-threatening or permanently disabling injury.

“You do get nervous sometimes before tournaments, especially just before a match starts,” said Roldan, who trains four days a week in the gym and on horseback and thus far has avoided any serious injuries. “But then you start riding and you forget all of it. Instinct has to take over.”

Because of the danger involved, this is not a sport for beginners, though Roldan expected that a number of novices would take part in the Diamond Cup and in the tournaments in Florida. “Many times the Number Four is a sponsor,” he said. “Often it is a wealthy person who is the reason you’re out there, the reason you’ve been hired. When they can play, it’s a great advantage. But some of them are just beginners who stand there thinking they’re playing.”

Though he admits to enjoying the folly of people who have barely ridden a horse trying to wield a polo mallet, he also can become frustrated by their hubris. “They need to at least spend a year just riding, acclimating themselves to the starts and stops of a horse,” he said. “Polo is a sport where you ride at top speeds, hanging off your saddle and trying to land a shot with precision. You won’t accomplish that right away.”

Roldan felt fortunate that the novice player on his team in Argentina, a professional soccer player, had enough riding experience to be considered a competent competitor. “And he actually plays some defense,” Roldan said with a laugh.

Roldan and his teammates experienced mixed results in their first two matches in the Diamond Cup. Excitement and disappointment were fighting for position when Roldan spoke after the second contest. “We just got a great victory,” he said. “Winning by three goals is exactly how you want to do it. It just seems like we’re clicking.”

They were clicking after a clunker the previous day, against Cambiaso’s team. With a chance to tie the match in the closing minute, Roldan missed a shot from 70 feet away.

How did Cambiaso play? “He was perfect,” Roldan said with a soft chuckle.

A shot taken from as far as 70 yards out should end up in the goal at least 90 percent of the time, according to Roldan. The 10 percent of the shots that miss their mark will eat away at a player who is not blessed with selective amnesia, which Roland seems to possess. “It’s disappointing, but the game doesn’t give you a lot of time to reflect,” he said. “The next opponent is waiting for you.”

Against that next opponent, in the three-goal, 12–9 triumph, Roldan scored the match’s last couple of goals to seal the victory.

While most Americans were preparing for a Thanksgiving feast, Roldan was getting ready to play in the semifinal round of the Diamond Cup, though his team almost failed to make it that far in the tournament. To qualify, Punta del Este did not need to win its previous match, but it had to avoid losing by more than three goals. It entered the final chukker trailing by four.

“I hate to admit it, but I think we did play a little too loose,” Roldan said a few days after that match. “That other team was hungry and took advantage. Any team with professionals is going to do that.”

With about 10 seconds left in the match, Roldan’s team scored a goal, pulling to within three and advancing to the semifinals against El Remanso, the team that won the tournament each of the past two years.

“We were up the whole game by one or two goals, and in the fifth period they tied it up with about a minute to go,” Roldan said of the semifinal match against El Remanso. “We were at 9–9 going into the sixth chukker, and I really thought we had a great chance to win it.”

The score was tied until the closing minutes, when El Remanso took the lead. Then with 15 seconds left, Roldan’s team was on the verge of tying the score again and sending the match into overtime, but. . .

“My teammate shot from five yards out,” said Roldan. “It hit the post.”

Roldan was disappointed with the outcome but not with the experience of playing in the match. “We had only three professionals to their four,” he said. “But when it comes to this sport, you have to love a challenge.”

With the 10–9 victory, El Remanso advanced to the finals against Cambiaso’s AA 2000 team. Roldan became a spectator, perhaps sipping a glass or two of Champagne while watching AA 2000 defeat El Remanso 14–13 in double overtime to claim the championship. The winning goal came on a penalty shot, by Cambiaso.

Nic Roldan, Adolfo Cambiaso, and other polo stars will be playing in South Florida from mid-February through mid-April, at the International Polo Club Palm Beach (www.internationalpoloclub.com) in Wellington. The club, which was founded in 2002, will host what might be this country’s three most prestigious tournaments: the C.V. Whitney Cup (February 12–27), the Piaget Gold Cup (February 24–March 20), and the 107th edition of the U.S. Open Polo Championship (March 17–April 17). Every team in each tournament is expected to field one or two of the world’s top-rated players. Tickets are available through the International Polo Club.