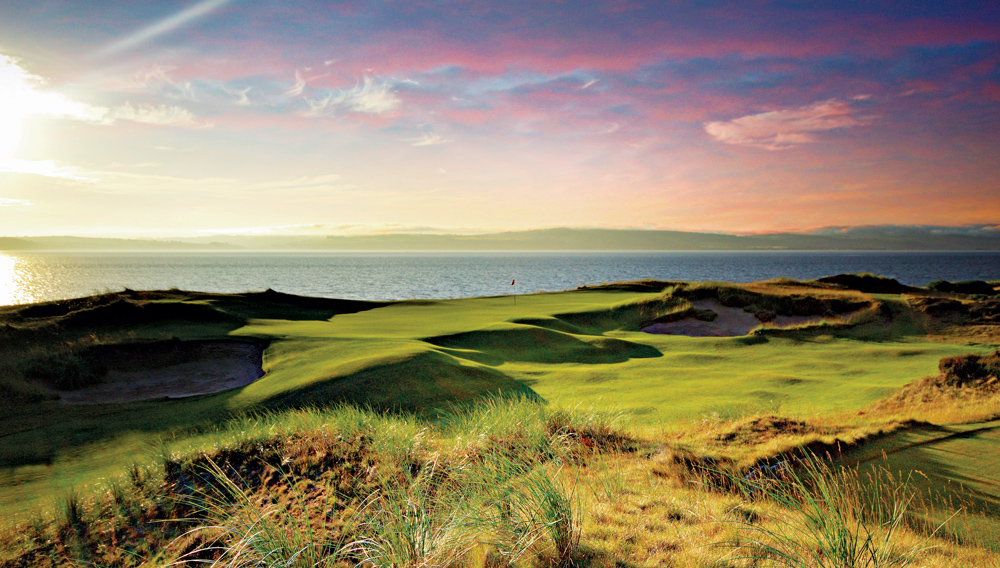 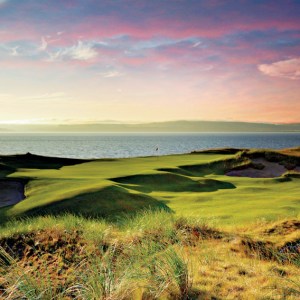 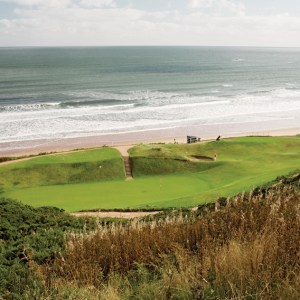 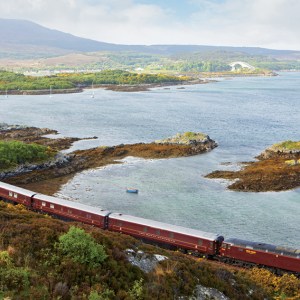 The Belmond Royal Scotsman speeds north along the rails toward Tain, a small coastal village in the Scottish Highlands, where the train eventually will stop for the night while the passengers sleep in their marquetry-lined cabins. But before that, having enjoyed a dinner of salmon tartare, roasted guinea fowl, and strawberry-and-vanilla crème brûlée, the passengers adjourn to the observation car. In the evenings, the car’s curtains are drawn and it transforms into a performance space. Tonight, the first night of the Royal Scotsman’s Scottish Golf Tour, a guitar-and-fiddle duo are playing Scottish folk songs.

Near the end of their set, the musicians break from traditional melodies and perform a rendition of “Wagon Wheel,” a song cowritten by Bob Dylan and made famous more recently by the Nashville string band Old Crow Medicine Show. With an afternoon round at the Royal Dornoch Golf Club scheduled for the next day, it seems fitting to serenade the passengers with a song that references a train and the wind and the rain, and expounds on the virtues of the North Carolina landscape. Royal Dornoch has been known to torment golfers with rain and blustery, unpredictable winds, and it was there that Donald Ross learned from Thomas Morris—better known as Old Tom Morris—the trade of course design. Ross went on to create more than 400 golf courses throughout the United States, including Pinehurst No. 2, his masterpiece in the sand hills of North Carolina.

Following the performance, conversation with the musicians turns to golf. The guitarist bemoans the rounds he plays with a member of his home course. The player is too careful, the guitarist says. On par 4s, he typically uses a 7-iron off the tee, hits another 7-iron approach, and, with a wedge, pitches onto the green to a distance that leaves a makeable putt for par. “Where’s the fun in that?” the guitarist asks. “There’s no excitement in that.”

He prefers to grip it and rip it, seeking to hit a memorable shot worthy of reliving over a pint after the round. This style of aggressive play has come to define the game in most parts of the world. But in Scotland, especially on traditional, treeless links courses—so called because of their coastal settings that link the land to the sea—a shot need not look impressive to be effective. The winds coming off the water can wreak havoc with an airborne drive or approach shot; instead of trying to hit the ball high and long, better to strike it low and hard and rely on good bounces on the firm fairways, and long rolls. In this respect, Scotland’s links, where the modern game was invented, have preserved the way golf was originally played. This is especially true of the Highlands courses on the Royal Scotsman tour, which offers golfers an additional sense of history by transporting them aboard a luxury train—the same way many affluent golfers visited the seaside clubs in the late 19th and early 20th centuries.

For 30 years now, the Royal Scotsman has carried travelers throughout the Scottish countryside, visiting historic castles, private gardens, whisky distilleries, and other attractions. The train is owned and operated by Belmond, which runs four others in the United Kingdom and around the world and owns a collection of luxury hotels. Belmond began offering the Scottish Golf Tour last year, after hosting numerous private golfing trips on the train. The next tour—a journey of five days, four nights, and three rounds—departs from Edinburgh on June 1 and returns June 5. The cost is $8,270 per person. For an additional $800, passengers can depart a day earlier and play a round on the PGA Centenary Course at the Gleneagles Hotel, the host course for the 2014 Ryder Cup. In addition to Royal Dornoch, the 2015 tour will stop at Castle Stuart Golf Links and the Trump International Golf Club.

Royal Dornoch is the oldest course on the itinerary. The 18-hole championship layout was finalized by Morris in 1886, and 20 years later the club was granted its royal status by King Edward VII. Sam Baker of Cincinnati joined Royal Dornoch in 1993, though his first experience with Scottish links came six years earlier and more than 200 miles to the south, at the Prestwick Golf Club, which was formed in 1851. Baker became so enamored of authentic links golf that in 1991 he established Haversham & Baker Golf Expeditions, a travel company that specializes in arranging golf excursions to the British Isles and other international destinations. He says golf in Scotland is “a different, creative game. On a golf course as rock-hard as an airport runway, you may hit a 7-iron from 200 yards and knock it down and run it for 50 yards. That’s the great thing about links golf: The ball just rolls forever if you hit it the right way.

“In modern golf architecture,” he continues, “we’re trying to take the unpredictability out of the game of golf, and that’s unfortunate. In the beginning, the game was all about crafting shots and living with your bounces.”

A round at Royal Dornoch can include plenty of unpredictable scenarios. On the sixth hole, a 161-yard par 3 that plays slightly uphill to a green seemingly cut out of the gorse-covered hillside, my tee shot falls back to earth, according to my caddy, only a foot or so short of the targeted landing area. But golf is sometimes a game of inches, and a dozen too few or too many can be enough to sabotage a shot. Instead of releasing onto the green and toward the hole, my ball trickles back down the steep embankment, leaving me with a 20-yard second shot that must first travel up a 7-foot bank and across a fast, granitelike green. Elsewhere, this would call for a wedge, but here at Dornoch my caddy recommends the putter.

Trusting his advice and his line—and praying that I hit the shot with the right amount of strength—I send the ball on its way and clamber up the slope to watch. It breaks to the right, funnels toward the hole, and comes to rest just on the back edge of the cup. My caddy cannot believe that the putt did not go in. I am amazed that I escaped the hole with a par.

The Scottish strategy of putting from points off the green figured into golf-course developer Mark Parsinen’s plans for Kingsbarns in St. Andrews, which opened in 2000, and Castle Stuart, which opened in 2009. Parsinen, who spends most of his time in California, began playing golf in Scotland 45 years ago. “Greenside bunkers are great for really great players,” he says, “but for average players, nothing good ever happens in them.” Parsinen helped design both courses to be punishing but still playable around the greens. “A putt from 40 feet through a big contour is difficult,” he acknowledges, “but the average player with a putter in his hands is hopeful. To be without hope is a bad thing in golf.”

At Castle Stuart, the fairways can also offer hope to the average player. Take the 14th hole, a par 4 that plays 386 yards from the back tees. The fairway is 50 yards wide and sparsely bunkered; but the entire right side is strewn with what the locals call rumple, a series of small hills and hollows that evoke ski-slope moguls. The rumple leads to uneven, tightly mown lies that leave little margin for error for players who try to flip a wedge onto the green. The prudent plan, Parsinen says, is to play down the left side, where the approach can produce a clear shot to the green.

My tee shot strays too far to the left, but a playable lie in the rough has me contemplating a strong 9-iron. I would be comfortable hitting such a shot back home, but not here. I return the club to the bag, pull out a 7-iron, and hit a knockdown approach that bounces onto the green, rolls nearly the length of it, and settles less than 3 feet from the hole. The shot serves as one of the Royal Scotsman tour’s many reminders that when the game is played on a genuine links course, it is still defined by the bounces and rolls—some of which can be very gratifying.