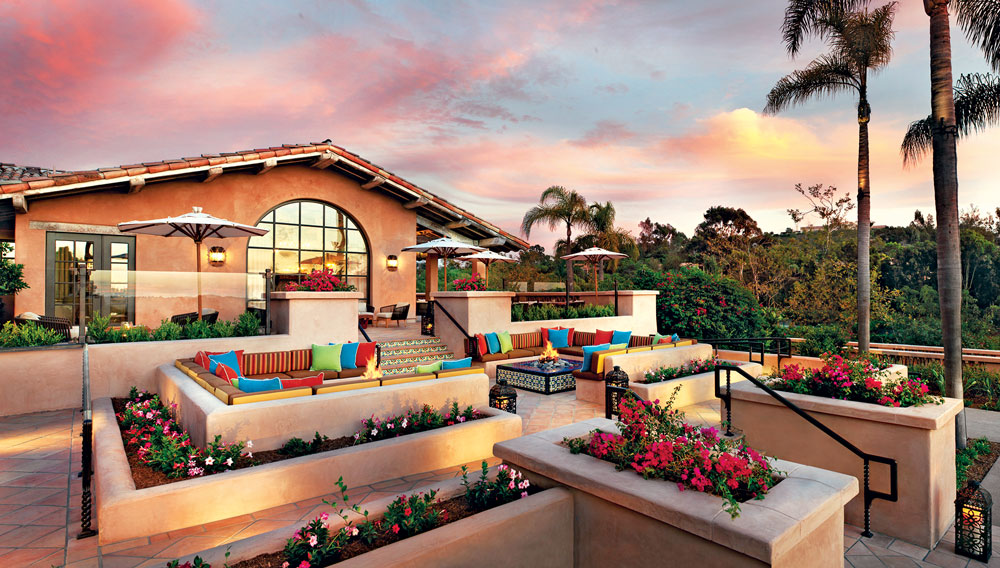 The scent of eucalyptus fills the air as I hastily flip a yellow felt ball skyward and—thump!—hit it hard across the court. The ball’s flight, however, proves neither powerful nor true, ending lazily in no-man’s-land on the other side of the net. Robin White—a two-time U.S. Open Champion in doubles and mixed doubles who is now the director of tennis at Southern California’s Rancho Valencia resort—is not discouraged. “Slow down the beginning and make sure to bring your racket up by your ponytail,” she says, adding that, rather than throwing the ball, I should focus on “placing” it in the air. Attempting this softer approach, I send my next serve firmly across the court, landing it squarely in the corner of the backside box.

“How did you like that one?” White asks with a smile.

Based at “tennis heaven,” as she calls this 45-acre retreat in northern San Diego, White has brought a fresh perspective to the property’s renowned programs in the sport. Rancho Valencia opened in 1989 and fast became an escape for ace tennis players, known for its John Gardiner–led camps and high-stakes tournaments. Last summer the resort renewed its decades-long dedication to the sport with the debut of a renovated tennis center with 18 Plexipave courts, an expanded clubhouse, and a new pro shop. Thanks to White, with the redesigned facility came a new air of leisure on Rancho Valencia’s courts.

“I played the game at the highest level, and I think it’s better to play tennis to add to your life,” says White, who began revamping Rancho Valencia’s programs in 2012. “It shouldn’t devastate you. I want you to walk away with something. I want you to say, ‘I got 1 percent better.’ ”

Under White’s direction, monthly matches are now followed by social engagements, where guests and members might mingle over beef sliders, lobster nachos, and tequila cocktails in the Pony Room bar. Of course, guests in search of serious improvement in their game can choose a more rigorous training program—from world-class clinics to one-on-one instruction—led by White and other on-site pros including an Olympic bronze medalist and a Wimbledon semifinalist.

By the end of my afternoon with White, my strokes are fluid and I am tempted to keep practicing. However, taking White’s credo to heart, I instead head to Rancho Valencia’s Veladora restaurant. Over a post-workout meal of rib-cap steak paired with a Syrah from the northern Rhône, I feel far more than 1 percent better.