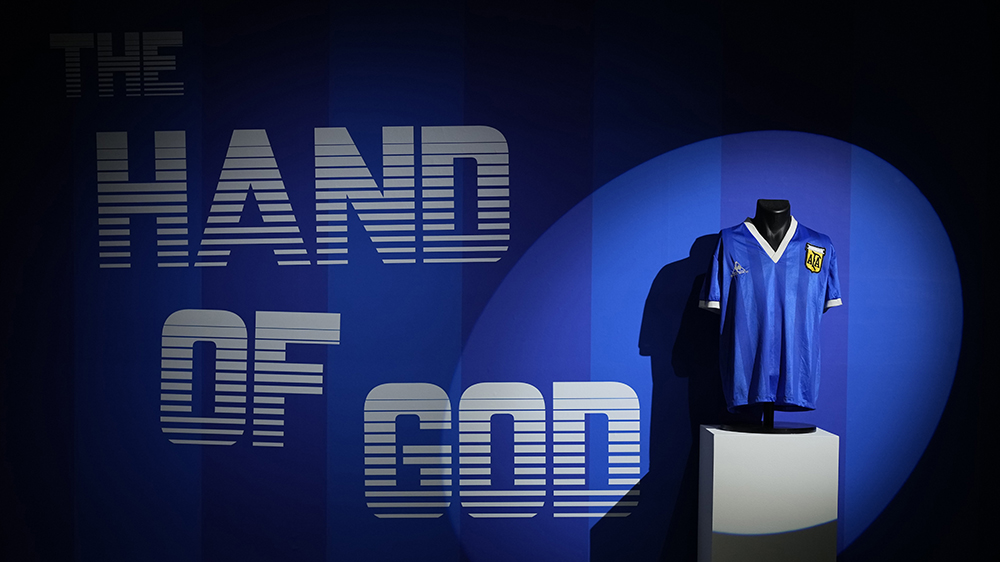 Good heavens! The jersey that Argentine soccer star Diego Maradona was wearing when he scored his famous “Hand of God” goal during the 1986 World Cup just sold for a record-breaking $9.3 million.

Sotheby’s noted the sale in a tweet on Wednesday, saying that the shirt now holds the auction record for any piece of sports memorabilia. The previous record-holder, a baseball jersey Babe Ruth wore when he played for the New York Yankees, went for $5.6 million in 2019.

“People are realizing these items can be appreciated like a work of art,” Brahm Wachter, the head of streetwear and modern collectibles at Sotheby’s, told The New York Times.

During that World Cup quarterfinal match, between Argentina and England, the then-25-year-old Maradona scored two of the most notable goals in soccer. The first, in which he infamously scored using his hand, was described by the player as being made “a little with the head of Maradona, and a little with the hand of God,” hence the play’s nickname. The second has been called the “World Cup Goal of the Century,” according to a vote held by FIFA.

After the game, in which Argentina won 2–1, the English player Steve Hodge asked Maradona to switch jerseys, and Hodge has been holding on to the shirt until now. In an email to the Times, a Sotheby’s spokesperson confirmed that the jersey had not been washed since the game.

“It was an absolute privilege to have played against one of the greatest and most magnificent football players of all time,” Hodge said in a statement. “The Hand of God shirt has deep cultural meaning to the football world, the people of Argentina, and the people of England and I’m certain that the new owner will have immense pride in owning the world’s most iconic football shirt.”

At the time, Maradona was a bit prescient about the significance of the jersey. Argentina’s coach, Carlos Bilardo, had been looking for a more lightweight alternative to the team’s typical cotton jerseys. Maradona saw the eventual winning option and said, “That one. We’ll beat England in that one.”

Maybe he also had a hunch that the jersey would have a place of its own in soccer—and auction—history.