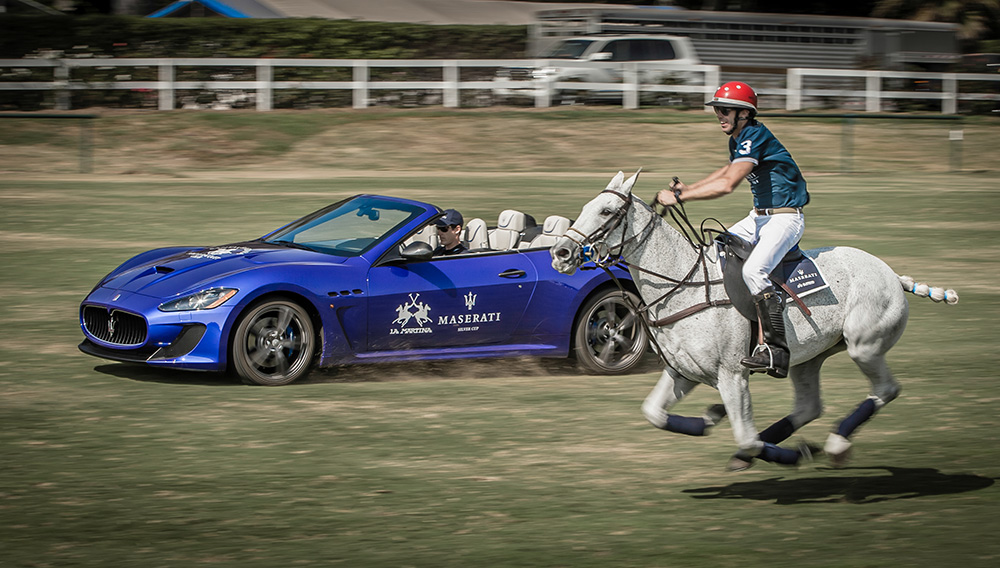 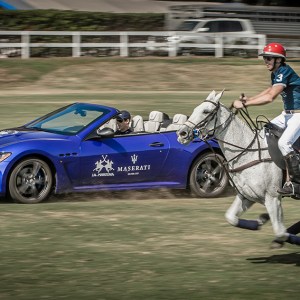 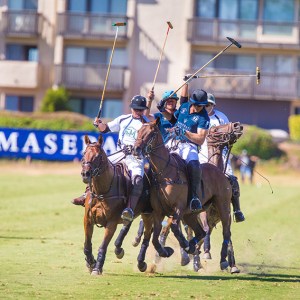 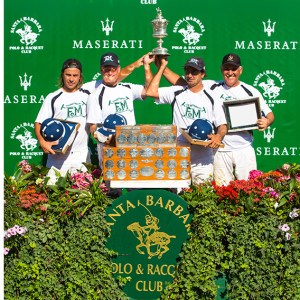 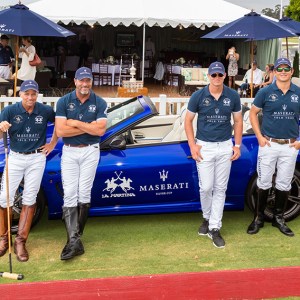 Driving up the Pacific Coast Highway from Malibu to the Maserati Silver Cup polo tournament in Santa Barbara, Calif., I was flush with the same excitement I felt as a child riding my first big-boy bike. A tap of the accelerator in the passing lane brought a responsive resonance and surge of power from the Maserati Ghibli S Q4, and in that moment I realized that after decades of driving, my training wheels were finally off. Powered by a 404 hp, 3-liter, twin-turbo V-6 engine, the four-door sedan is a family-friendly fury able to go from zero to 60 in under five seconds and reach a top speed of 175 mph. Needless to say, I was the first guest to arrive at the Santa Barbara Polo & Racquet Club for Maserati’s polo prelude held the day before the tournament, which ran September 5 through 7.

Considered among the four most important polo competitions in the United States, the Silver Cup is also one of the oldest. Names inscribed on silver plates around the trophy’s base date back over 40 years. This year, Maserati’s own polo team—Mike Azarro, Steve Kreuger, Justin Klentner, and Jesse Bray—hoped their names would be next. The players were adorned in uniforms that mirror the look of Maserati’s new collection of polo-inspired clothing on display in the event tent. The marque helped develop the line in partnership with Argentina-based design house La Martina.

“La Martina and Maserati partnered up more than 10 years ago to introduce the stunning and beautiful performance cars to the polo community,” says La Martina’s president and CEO Adrian Simonetti. “For the past 30 years, La Martina has designed a lifestyle that speaks to a global polo citizen, blending elements from the company’s Argentine heritage together with the effortless style of the English spirit.”

Also on hand was La Martina’s brand ambassador, international polo star Malcolm Borwick, to offer lessons in the basics of the game. “Polo is for me the sum of all sports,” he says. “It combines the thrill of riding one of the world’s finest animals, the camaraderie of a team, the technical complexity of chess, and the endless opportunity to travel.”

Believed to predate written history, polo’s origins track back to the early nomads that eventually populated ancient Persia. The contemporary game, however, is credited to the horsemen of Manipur, India, whose playing was observed by Lieutenant Joe Sherer of the British military in 1859. Soon used as a means to train and condition cavalrymen, the game was given comprehensive guidelines—known as the Hurlingham Rules—by the British in 1874. Every rule, including the one requiring the mallet to be held only in the right hand, was established for the safety of the horses during the contact sport.

After Borwick explained this background, he introduced the four basic strokes consisting of the offside and nearside (right and left side of the horse) forehand and backhand, and the group of us played a “chucker” (a 7-minute period) on foot with short mallets and a miniature field. Intimidating enough, the thought of mounted riders barreling 45 mph across a pitch the size of nine football fields—all while swinging mallets—was incomprehensible. Yet Borwick had us up on horses within an hour. The epitome of equine excellence, polo ponies are trained to block out distraction and take command ques from the neck, as riders must hold both reins using only their left hand. Fortunately, the horse I was given to practice on graciously kept the pace to a sedate walk while I wailed away at the air—both of us equally surprised when contact with the ball actually occurred.

The prelude concluded with a race between Borwick’s “1 hp” sleek and strapping steed and its automotive match-up, a 454 hp Maserati GranTurismo Convertible. Traveling the 160-yard width of the field, the horse won by less than a body length as the car tried to gain traction on the finely cut turf. The Maserati won the rematch, however, in 8.73 seconds.

Unusually warm temperatures for Santa Barbara greeted the participants on Friday, the first day of the tournament. The morning match pitted the team of Farmers & Merchants Bank (FMB) against the Wildcat squad with FMB advancing after a score of 12 to 10. Team Maserati took the field in the afternoon, going up against the polo powerhouse Lucchese. With the score tied at 13 after the regulation six chuckers, Maserati’s Steve Kreuger scored the winning goal in overtime, advancing the marque’s men to the final.

Whereas the atmosphere on Friday was casual and intimate, Sunday was dressed differently. Attracting the American Riviera’s well-heeled on Labor Day weekend, the polo grounds became the town’s social epicenter with actors Natasha Henstridge and Alan Thicke among the tournament’s tony turnout. Elaborate hats and heels appeared de rigueur for the ladies, and many gentlemen sported white linen while it was still socially acceptable to do so. Champagne in hand, the crowd pressed down divots on the field during the half before polo hall-of-fame riders Memo Gracida and Mike Azzaro of FMB and Maserati, respectively, returned to rally their teams with inspired play. But at the end of the day, it would be FMB earning the Silver Cup with a score of 13 to 11.

After surveying Maserati’s complete collection of 2015 car models flanking the field, I start up the Ghibli one last time, selecting sport mode as my high-performance preference of driving options. The now familiar but still thrilling rumble of its harnessed horses is my only soundtrack as I ease back into reality after living the polo lifestyle—if only for a moment. (maserati.com; lamartina.com)