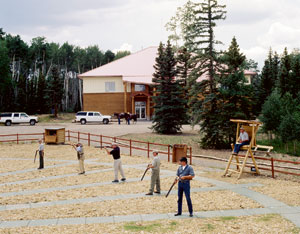 With a loaded pistol in his holster, the stockbroker, while on vacation in southwestern Colorado, enters a forbidding city neighborhood, seeking a pair of armed criminals who have taken refuge here—perhaps in the smoky bar or maybe in one of the dark alleys. Just as the stockbroker steps into one of these alleys, an assailant emerges from a doorway with a gun in his right hand. Acting on reflex, the stockbroker draws his Glock, points, and fires two bullets, striking the assailant in the center of his chest. The fast reaction and accurate aim prompt a word of praise from his instructor, who is standing behind the stockbroker, assessing his every move.

The neighborhood is one of the scenario rooms at Valhalla Shooting Club & Training Center at Elk Mountain Resort—others include the first-class section and cockpit of a 737, a fully furnished house, and a nightclub and bar—and the assailant is merely a paper target that was triggered by a motion sensor. However, the gun and bullets are real.

The stockbroker’s heart is still pounding as he makes his way into the next section of the room with his gun in one hand, pointed upward. “Gun down,” says the instructor. “This isn’t the movies.”

More than just offering some fantasy fulfillment, the scenario rooms give club members the type of firearms training they need to become, as the instructors say, “combat ready.” Valhalla, which opened in January and includes a 16,000-square-foot indoor shooting range and a clay-shooting facility, also serves as a combat training facility for law enforcement departments and security firms. “Guns are a part of American culture,” says Rob Pincus, Valhalla’s director of shooting operations. “People are intrigued by them. It’s part of our social truth. We want people to understand what’s real and what isn’t.”

In addition to priority booking at the club’s indoor range and scenario rooms, Valhalla members are given a .45-caliber Les Baer pistol, discounts on ammunition and gun rentals, and 20 hours’ worth of classes on a variety of subjects including tactical shooting. Members also receive priority bookings and price discounts at Elk Mountain Resort, a 275-acre expanse 40 minutes from Telluride that is surrounded by more than 60,000 acres of national forest.

Among Valhalla’s variety of facilities is a clay-shooting range. (Click image to enlarge)

Because of the club’s location at Elk Mountain Resort, which opened in the spring, members can practice their aim while their spouses and children enjoy a wide variety of nongun-related activities such as rock climbing, horseback riding, and winter sports.

Individual membership in the Valhalla Shooting Club will cost $52,000 for the first 50 members who join. (About three dozen of those slots remain.) Once these are purchased, an additional 500 memberships will be sold at $64,000. Corporate memberships are also available. Individual memberships can be transferred from parents to children. Membership approval is granted by the club’s board of directors and is contingent on the successful completion of a background check required for gun ownership.