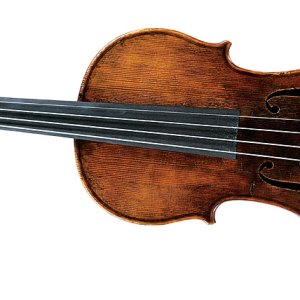 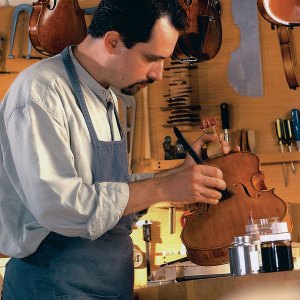 Marco Coppiardi insists that by employing Antonio Stradivari’s antiquated techniques, he produces violins superior to any modern-made ones. Coppiardi, a 40-year-old luthier with dark hair and a small build, creates copies of instruments made more than 400 years ago by Stradivari and other Italian masters. He fashions their fronts and backs from Val di Fiemme spruce, Italian Alpine wood that Stradivari used; he cooks batches of varnish from centuries-old recipes; and he uses cowhide glue to hold his instruments together. “I have insight into what Stradivari was doing, but I cannot become Stradivari, because he was an inventor,” Coppiardi says. “Today, I have it easy. I don’t have to invent anything.”

Coppiardi, whose workshop, Italiastrings, is located in Boston, was born and raised in Cremona, Italy, the northern Italian town that was the center of violin making in the 16th and 17th centuries. Andrea and Nicolò Amati, Giuseppe Guarneri, and Stradivari all plied their trade there; Andrea Amati, grandfather of Nicolò, is credited with inventing the violin as we know it.

Coppiardi, who moved to the United States in 1992, trained in Cremona in the early 1980s, spending five years at the International School of Violin-making, learning to fashion violins, violas, and cellos. In 1982, Japan’s Crown Prince Naruhito, an avid violist, visited the school. He toured the grounds and examined several student-made instruments. “I didn’t see this myself, but I know he played a viola I had made, and he liked it,” Coppiardi says. “The head of the school called me and asked if I would like to make a viola for the prince of Japan. I was 16, and I didn’t think much of it, but as I made it, it got to be a bigger and bigger deal.” He spent two years making the viola, which, he was informed, his patron continues to play; a fellow luthier in Japan told Coppiardi that a royal representative has sent the instrument to his shop for routine maintenance.

Coppiardi recently relocated to a storefront in Boston’s Back Bay neighborhood (from the nearby city of Cambridge, Mass.) to be closer to the Berklee College of Music, the New England Conservatory, Symphony Hall, and other musician magnets. He works alone in his shop, a small space decorated with glossy images of Stradivari and Guarneri violins, finishing four new instruments annually. Coppiardi does allow one concession to modernity: He mixes his varnishes with Everclear instead of with the toxic, lower-grade alcohols that were available to his forebears. “I don’t want to get sick,” he says. “All the violin makers died young except for Stradivari.” He takes numerous photographs throughout the long process to foil anyone who might try to pass off one of his copies as a genuine antique.