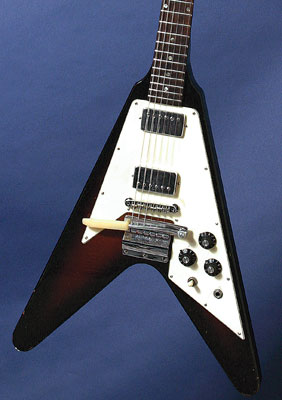 The walls of Gruhn Guitars, George Gruhn’s shop in Nashville, Tenn., are lined with vintage electric, acoustic, and steel guitars, as well as mandolins, ukuleles, and violins, but on this busy morning in June, the proprietor is appraising a 1933 Gibson Mastertone banjo. Gruhn scrutinizes it and then plays it briefly before calling for Charlie Cushman, who had been working in the fourth-floor restoration shop.

“Is this your baby?” Cushman asks the banjo’s owner, who responds with a smile, recognizing Cushman, a Gruhn employee, but also a renowned banjo player. “Is that a Frank Neat neck?” Cushman asks, surprising the banjo’s owner with the question. “I don’t need to look. If you grab the neck right there,” he says, indicating an area midway up its length, “you can tell. He’s the best.” Gruhn watches the exchange from a seat at a rolltop desk. On a sheet of letterhead, he begins writing as Cushman continues questioning the client, who has traveled from San Antonio for this appraisal.

When Gruhn last saw this banjo seven or eight years ago, he valued it at $17,500. Now he hands the owner the letterhead on which he has written the figure $75,000.

“What? Are you serious?” the client asks.

“I believe that enough that I’m ready to act on it,” Gruhn says. The owner is not, but he promises to contact Gruhn if he decides to sell.

Later that day, as he deftly uses chopsticks to eat corn kernels one at a time from the salad he is having for lunch at a Japanese restaurant, Gruhn corrects the impression that such Antiques Roadshow moments are common. “That was unusual,” he says, his voice devoid of a Southern accent but hinting at a childhood spent in Brooklyn, Pittsburgh, and Chicago. “Fakes outnumber the real 10,000 to one. His is real.”

That said, the likeliest place for someone to appear with a genuine 1933 Gibson Mastertone banjo in hand is Gruhn Guitars. It has been a Nashville fixture since 1970, long before anyone would pay $75,000 for a used banjo or more than $100,000 for a prewar Martin D45 or a 1959 Les Paul Sunburst. A Martin D35S that Gruhn customized for Johnny Cash in 1970, and which Cash strummed while taping The Johnny Cash Show nearby at the Ryman Auditorium, sold for $135,000 after the singer’s death. The instrument now resides in Nashville’s Country Music Hall of Fame.

Gruhn says he understands why vintage guitars continue to increase in value. “Fender, Martin, Gibson, and to a certain extent Rickenbacker and Gretsch, are archetypes. Virtually everything else is still based on them. There’s nothing in a new guitar that makes the old ones obsolete,” he says. “Plus, there’s a certain magic about an old guitar.”