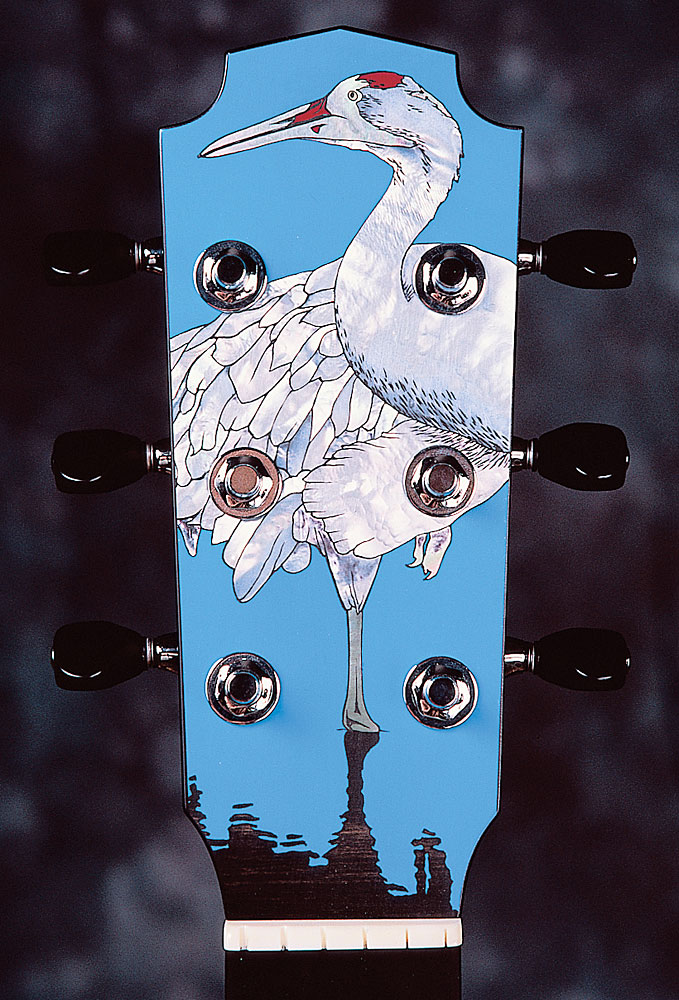 William Laskin employs semiprecious gemstones the way that a painter uses watercolors or acrylics. The master luthier decorates his acoustic guitars with inlaid scenes that he creates by cutting shallow cavities in the surfaces of the instruments and inserting the stones to form the images.

Laskin reaches into the drawers of the antique card-catalog filing cabinet that supports the workbench in his Toronto studio and retrieves thin, flat samples of malachite, red coral, Tahitian black-lip pearl, and turquoise as blue as the waters of the Caribbean. The malachite and the turquoise are “recon,” or reconstituted stone, which is made from precious materials that have been pulverized and reassembled in a vacuum with the help of an epoxy-like resin. “No one else in the guitar world was using it,” says Laskin, who began working with reconstituted stone in 1995. “Before, when I wanted a primary color, I used to stain wood. Recon stone suddenly tripled my palette. I used it on a guitar, and I have never looked back.”

Since then, he has created, among others, a guitar with an inlay that he dubbed The Yellow Door. The image, which appears on the headstock (the part of the guitar neck to which the strings attach), shows a trench coat–clad woman hesitating to open a door to an unseen man who casts a midnight blue shadow made from lapis lazuli. In D.I.Y. Vine, a scene that spans the guitar’s headstock and fingerboard (the front of the neck), three people stand on scaffolding, constructing a vine. One has lost his grip on the vine, forcing his colleague below to shield herself from falling mother-of-pearl stems. “I don’t see inlay as a decoration, but as a canvas,” Laskin says. “My goal is to tell a story, convey a feeling, communicate. I don’t think, ‘Here’s some ebony, let’s throw some shell in there.’ I think, ‘Have I told a story?’”

Laskin’s guitars have been in demand since he was 19: The day he finished his two-year apprenticeship with Toronto luthier Jean Larrivée, in 1973, he had a waiting list for his work. However, none of those instruments featured the elaborate inlaid images that would become his hallmark; he mastered that craft on his own years later. “It took me time to pick up that skill,” says Laskin, who is now 54. “I didn’t learn it from Jean. I went to a jewelry supply store, bought some [engraving] tools and some shell, and started to dig in and feel the way to make a line. It evolved from there.”

Although his guitars serve as canvases for his inlay art, Laskin says they are first and foremost musical instruments. “If a guitar doesn’t sound good or play well, it’s a complete failure,” he says. “You may as well put plants in the sound hole.”

Laskin produces 12 to 14 guitars each year, building two instruments simultaneously and crafting the inlaid scenes one at a time. He works alone, devoting as many as 175 hours to a single inlay. “It’s a slow process to get a degree of realism not usually done in the medium,” he says. “Human faces and hair can take a day and a half to do accurately.”

Laskin does not spend all of his time at the workbench. He cofounded Borealis Records (Canada’s leading folk music label), writes and performs his own songs, and appears in concert playing his instruments. “I’m my own best advertisement,” he says. “There are many performers on a tour, and it’s in the nature of the gig to say, ‘Hey, I like your guitar. Who made it?’ It’s amazing how fast word spreads.”