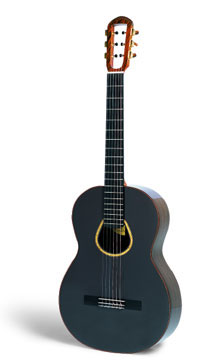 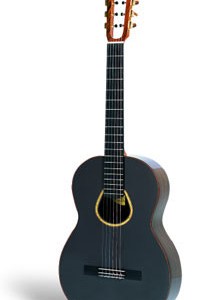 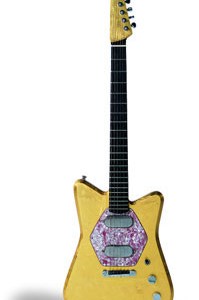 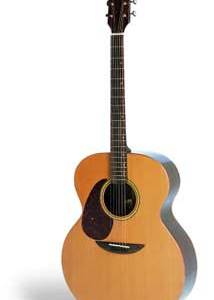 Kari Nieminen’s first name reflects his Viking ancestry, but the 43-year-old Finn rose to prominence through his mastery of an ax very different from the type his forebears wielded. Nieminen has been building guitars professionally since the age of 17, and his Versoul line of high-end instruments resonates with musicians and design students alike.

This is no accident. Nieminen sees himself as an industrial designer rather than a luthier, a formal term for someone who designs and builds guitars. In fact, he earned a master’s degree in industrial design from the University of Art and Design in Helsinki, Finland, in 1989. His guitar-making skills, in contrast, are entirely self-taught. His unusual course of education enables him to understand and respect traditional guitar design while remaining free from the creativity-stifling constrictions that come with a centuries-old craft. “Luthiers carry on the tradition,” Nieminen says. “Industrial designers analyze the tradition—they study the evolution and history of the guitar, and how innovations and techniques have changed it. If you understand the guitar, you have better tools to design new, better guitars.”

Nieminen modifies the classic American designs of Fender and Gibson electric guitars to create modern, unique shapes that offer an ease of playability and produce a superlative sound. While the Versoul line comprises everything from electric acoustic guitars to sitars, the Touco Classical nylon string guitar is a standout. The Touco departs from classical and flamenco guitar design by employing a wider, slotted headstock, which allows musicians fingers’ more space for changing chords on slippery nylon guitar strings and offers greater stability when tuning. Despite its unorthodox design, the Touco has been embraced by a number of Latin music professionals, including Spanish guitarist, singer, and composer Amancio Prada and Grammy award–winning producer and songwriter Rudy Perez. Upon playing the guitar, it is easy to see why it has earned their favor. Notes blossom, sustain, and seem to jump out of the sound hole.

Another remarkable Versoul instrument is the 12-string Raya. Its shape recalls the Ted McCarty–era Gibsons of the late 1950s, and it might be the most comfortable 12-string you will ever strum. The balance of neck and body and the deep, rich, bell-like tones add up to a sumptuous musical experience.

Nieminen’s keen attention to detail is evident in all of his guitars. “A guitar aimed at a highly professional level is an ultimate tool,” he says. “I have to find the aesthetic and structural balance with materials to achieve the best new, original sound around.” Concern for the musician’s comfort is a crucial element to his design philosophy; these instruments were created to help players feel as free to experiment with music as he felt in experimenting with design. “I have so many ideas and visions to create new, unheard sounds,” Nieminen says. “First, I hear the sounds in my head, and then I try to make the instruments that can produce them. There are still many possibilities to create new sounds if you are open to new things.”

He has also expanded the possibilities for adding luxury accents—small and large—to his instruments, from 23-carat gold leaf body finishes (also available in silver and platinum) to ebony bridge pins (or fossil walrus ivory, if you wish) to gold-plated tuning heads to a nut and saddle made from Finnish moose shinbone. His wood selections include Finnish alder, aspen, and South American mahogany.

Nieminen’s groundbreaking guitar designs have not gone unsung. In 1998, he collected the Industrial Designer of the Year award from the Association of Finnish Industrial Designers. This led the Finnish post office to feature his Zoel 6-string acoustic guitar on a stamp the following year. First-class postage, indeed.